“I Found 130 Letters by My Ancestor!” Why Use Google Books for Genealogy

Betty has at least 130 good reasons to use Google Books for genealogy! She used this powerful Google tool to find her ancestor’s name in a book–which led to a treasure trove of his original letters in an archive. Here’s what happened–and how to try this with your own family history research. 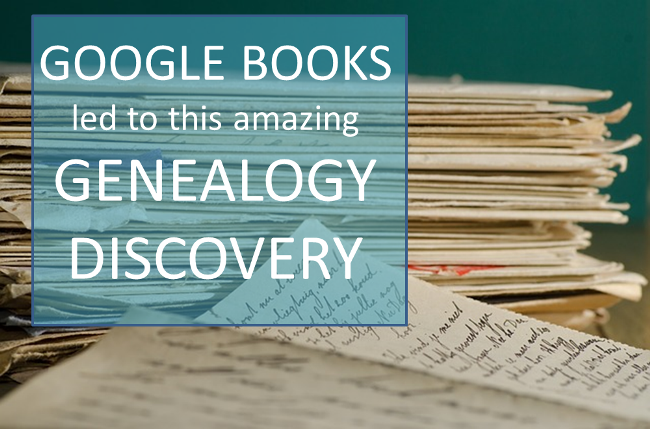 You’ve heard me say that Google Books is the tool I turn to every day. Now, you may be thinking, “But my ancestors wouldn’t be in history books!” Resist the temptation to make assumptions about sources, and about your ancestors. With over 25 million books, Google Books is more likely to have something pertinent to your genealogy research than you think. And as I often tell my audiences, those books can include source citations, providing a trail to even more treasures.

Why to Use Google Books for Genealogy: Success Story! 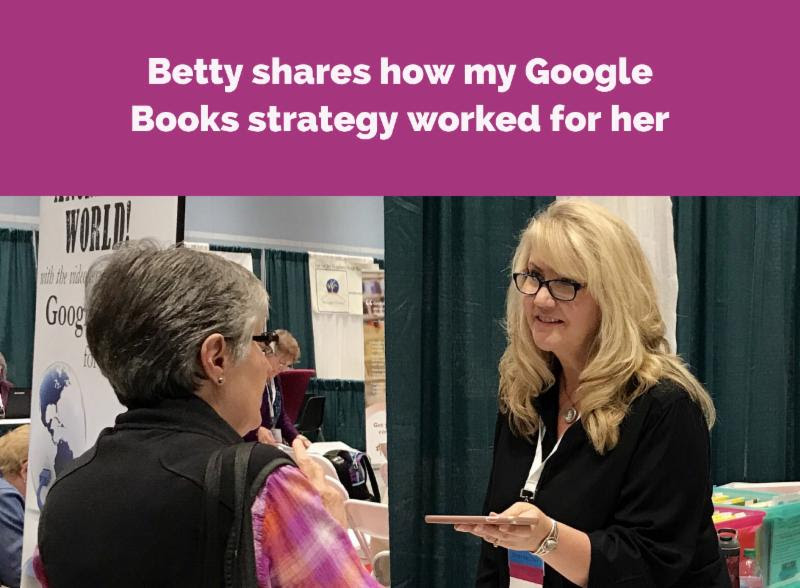 At the National Genealogical Society conference this past spring, Betty attended my class and then stopped by the Genealogy Gems booth to share her story. I recorded it, and here’s a transcription:

Betty: I was stuck on my Duncan Mackenzie ancestor, so I put his name in Google Books, because when you’re stuck, that’s what you do!

Betty: So, up popped this history of Mississippi, it was sort of a specific history, and it said Duncan Mackenzie had written a letter to his brother-in-law in North Carolina from Covington County, Mississippi. And of course I already had my tax records and my census records that placed him in Covington County. This was in the 1840s. I thought, this just couldn’t be him! Why would any of my relatives be in a book? [Sound familiar?]

So, finally, weeks later, it occurred to me to go back and look at the footnotes in the book, and I found that the letters could be found in the Duncan McLarin papers at Duke University. So, I didn’t even think to even borrow the microfilm. I just told my husband, “next time you go East for work, we need to go by Duke University.” So I set up a time, and I went, and it WAS my great-great-grandfather who wrote those letters! I have now transcribed 130 letters from that collection. They let me scan them all, and I’ve been back again to scan the rest of the legal papers.

Lisa: So, an online search into Google Books not only help you find something online, but it led you to the offline gems!

Betty: And it just changed my life! Because I spend all my time on these letters. It’s distracted me from other lines! [LOL! I get that!]

How to Use Google Books for Genealogy

Are you ready to put Google Books to work in your own research and discover some genealogy gems of your own? Here, I re-create Betty’s search for you, so you can see how to get started:

1. Go to Google Books (books.google.com). Enter search terms that would pertain to your ancestor, like a name and a place.

2. Browse the search results. The first three that show up here all look promising. Click on the first one. 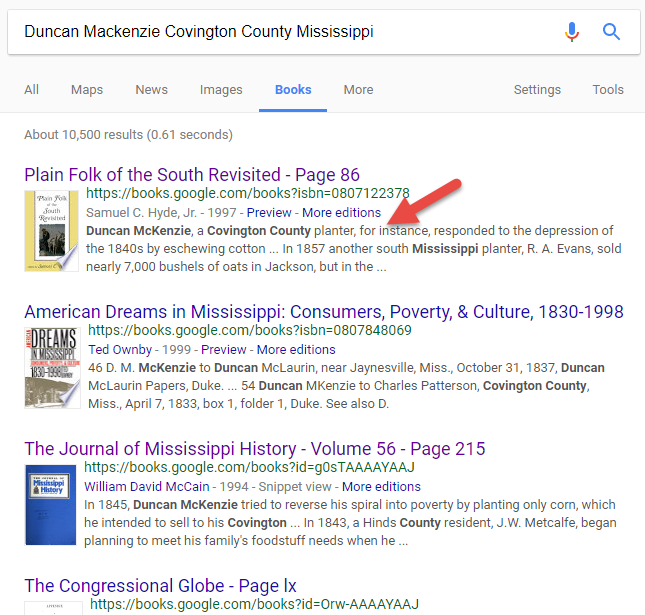 3. Review the text that comes up in the text screen. As you can see here, Duncan McKenzie of Covington County is mentioned–and the source note at the bottom of the page tells you that the original letter cited in the book is at Duke University. 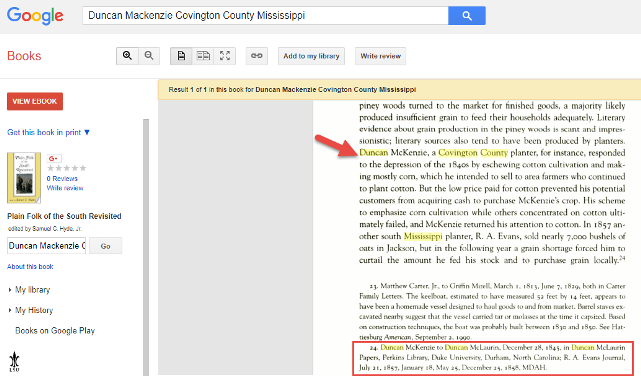 Learn more by watching my free Google Books video series at the Genealogy Gems YouTube Channel. Click the video below to watch the first one. (And be sure to subscribe while you’re there, because there are more videos to come!)

Then, watch the video below for a quick preview of my full one hour video class (and downloadable handout) called Google Books: The Tool You Need Every Day!, available to all Genealogy Gems Premium Members.

Ready to start tracing your Irish genealogy? Don’t get into a fog and loose your way. Beginning Irish genealogy is a snap when you follow these step-by-step tips from expert Donna Moughty. 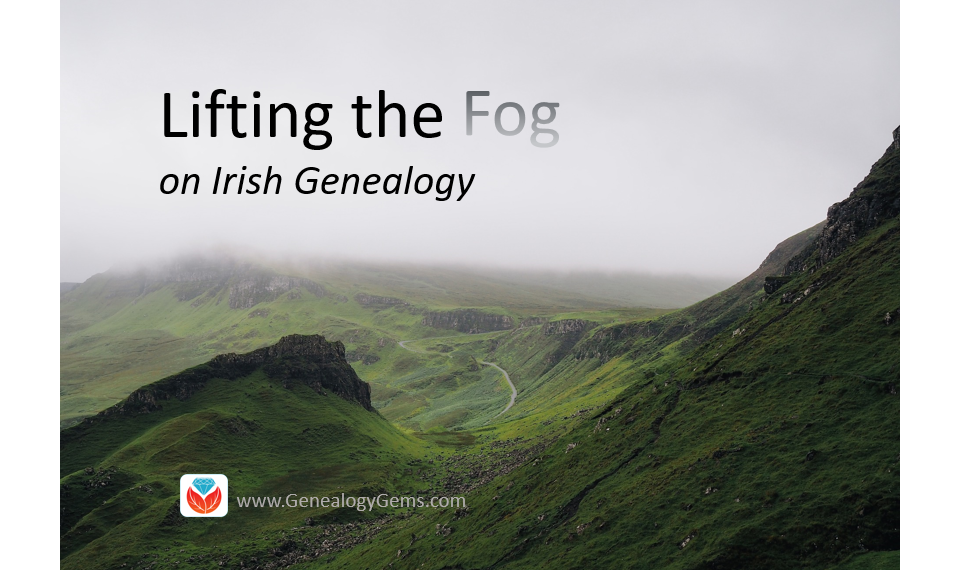 At the recent RootsTech 2017 conference in Salt Lake City, I had the opportunity to sit down and film a conversation with Irish genealogy expert, Donna Moughty. We discussed some of the key elements of Irish research such as developing a research plan, tracking down the necessary information in U.S. records, and the dramatic way in which Irish genealogical records research has changed in the last few years. You can watch that video below:

with Donna Moughty at RootsTech 2017

1. Start with yourself and work systematically back, making sure you’ve made all the right connections. Common Irish names can easily send you off on the wrong track.

2. It’s all about location in Ireland. Not just the county but name of parish, or if possible, the townland they came from. If that information exists, it’s likely to be in the country to which they immigrated.

3. If the information exists, it’s probably not in one location. You might find it in bits and pieces in a lot of records. All records are not online, especially Roman Catholic church records in the U.S. When requesting those, write to the parish, send money, and tell them you’re looking for the locality in Ireland. The parish secretary will fill out a form, which may not have room for the locale on the form so you may not get that information unless you ask for it.

4. Scour the documents! Some Catholic priests would not marry a couple without proof of baptism, so there may be information in the marriage buy medication for gonorrhea record about the location of the parish of baptism.

5. Research everyone in the family including parents, siblings, and children. If that doesn’t pan out, start all over again with the witnesses and the sponsors from the baptismal records. Who are they? Where are they from? They were likely a family member or close friend who came from the same area in Ireland.

6. Many of us had Irish immigrants who came during the famine era or after (1840s-). They used chain migration. One relative came and worked and earned the money to bring someone else. The later the person arrived, the more information we’re likely to find on that individual. Watch later censuses for someone living in the household who was born in Ireland, maybe a cousin or niece, because they likely came from the same place. If they came after 1892, we’ll find a lot more information in the passenger list, including the place they were born, and if they naturalized after 1906, we’ll have all the information we need.

7. Once you get back to Ireland and if you know the maiden and married surnames of a couple, look in Irish records to see where those two surnames show up in the same geographic location. This overlapping of names is a good indicator that you are researching in the right place. You can research surnames using Griffith’s Valuation 1847-1864, which is an Irish tax list (search it here on Ancestry.com). The majority of the people who were occupiers of land (tenants on someone’s estate) are named here. 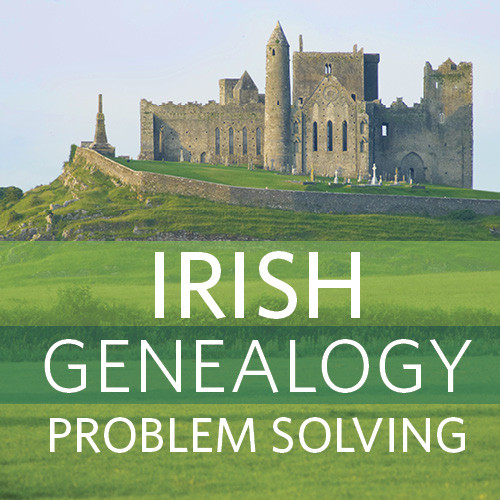 Genealogists with Irish roots face a number of research obstacles that only seem to produce more questions. The fire at Four Courts in 1922, as well as the government’s destruction of early census records, has left a major void for Irish family historians. Contrary to popular belief, however, not all records were destroyed. Although difficult, tracing your ancestry in Ireland is not impossible. In this hour-long webinar, Irish genealogy expert Donna Moughty will answer the most common questions faced by researchers conducting Irish research. Click here to order the instant video download now! 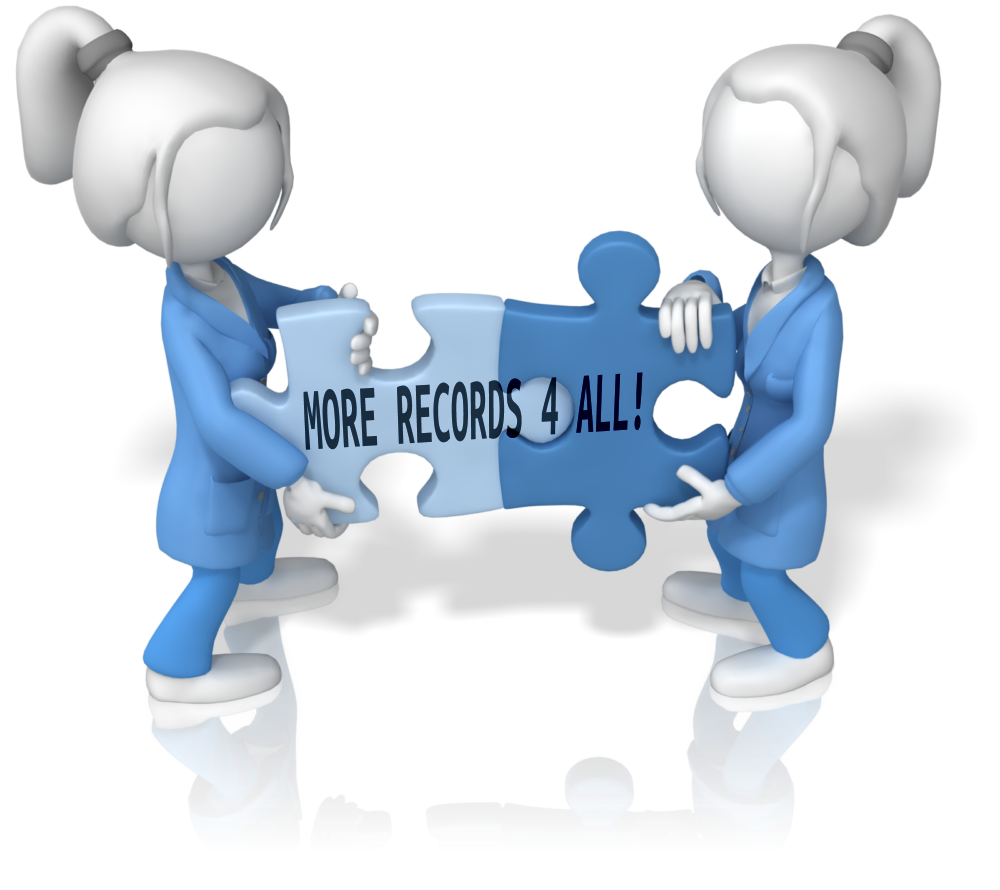 everywhere. It looks like FamilySearch’s billions of historical records will get a searchability boost with MyHeritage search technologies and users of both sites will have access to the results.

According to MyHeritage’s press release, “MyHeritage will receive more than 2 billion global historical records from FamilySearch, spanning hundreds of years. Collections include vital records (censuses, births, marriages and deaths) as well as hundreds of other collections from many countries.

Over the next few months, we will add this important content to SuperSearch and unleash MyHeritage technologies – such as Smart Matches and Record Matches – on the new content. This will bring significant new opportunities for MyHeritage users to grow their family trees and enrich their family history.”

FamilySearch users get something great out of this, too. “FamilySearch members will benefit from MyHeritage’s unique technologies which automate family history discoveries,” says the FamilySearch press release. “Smart Matching™ automatically finds connections between user-contributed family trees and Record Matching automatically locates historical records relevant to any person in the family tree. By receiving accurate matches between FamilySearch’s Family Tree profiles and historical record collections, such as birth, death, census, and immigration documents, FamilySearch members will be able to more effectively grow their family trees in size and in depth and add conclusions supported by historical records.” This technology is slated to be applied in 2014.

Got questions? Check out MyHeritage’s official blog post and FAQ regarding the partnership.