Newspapers offer such a unique perspective on history in general, and our ancestors specifically.  In Part 1 of this 2-part series, we talked about finding historical newspapers. In this episode, Jane Knowles Lindsey at the California Genealogical Society shares inspiring stories about the kinds of family items she’s found in newspapers. She offers a  dozen more fantastic tips on researching old newspapers.

Here are 12 more tips for researching newspapers and organizing your discoveries: 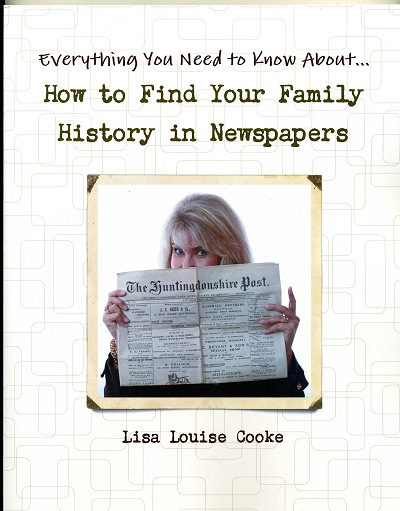 Finally, don’t forget this Genealogy Gems resource: How to Find Your Family History in Newspapers walks you through the process of finding and researching old newspapers. You’ll find step-by-step instructions, worksheets and checklists, tons of free online resources, websites worth paying for, location-based newspaper websites and a case study that shows you how it’s done.

A recent blog post at slate.com caught my eye because it features a map from the genealogists-love-it David Rumsey map collection. But what captured my attention was the story the unfolded behind the foldable map itself. I think you’ll love it!

of airline giant TWA. Apparently early “transcontinental flights,” as they were advertised, were sight-seeing tours with short flights interspersed by train rides to the next flight location. The map featured in her blog post was a souvenir of one of these passengers, who added his own colorful comments on his experience.

This fun post is part aviation history, part map-lover trivia. The story unfolds even more in a short video documentary on Transcontinental Air Transport I’ve added below. It includes cool aerial shots and more on how the early air transport industry, er, got off the ground.

And don’t forget to use maps (storied or just the plain informational types) in your family history research! These can help you find your way around ancestral hometowns, chart migration routes as they would have and otherwise see the world (literally) in the same ways they did.  David Rumsey’s map collection is one of the best online collections out there, with free access to over 44,000 high-resolution historical maps.

Learn more about how to use the David Rumsey historic map collection in conjunction with Google Earth by watching my free video class Google Earth for Genealogy.