So, you think there might be a missing census page? Whether it’s a missing census or a missing family, my special guest, professional genealogist Kate Eakman from Legacy Tree Genealogists has strategies to help you figure it out. She has just the answers you need to find your ‘missing’ family. 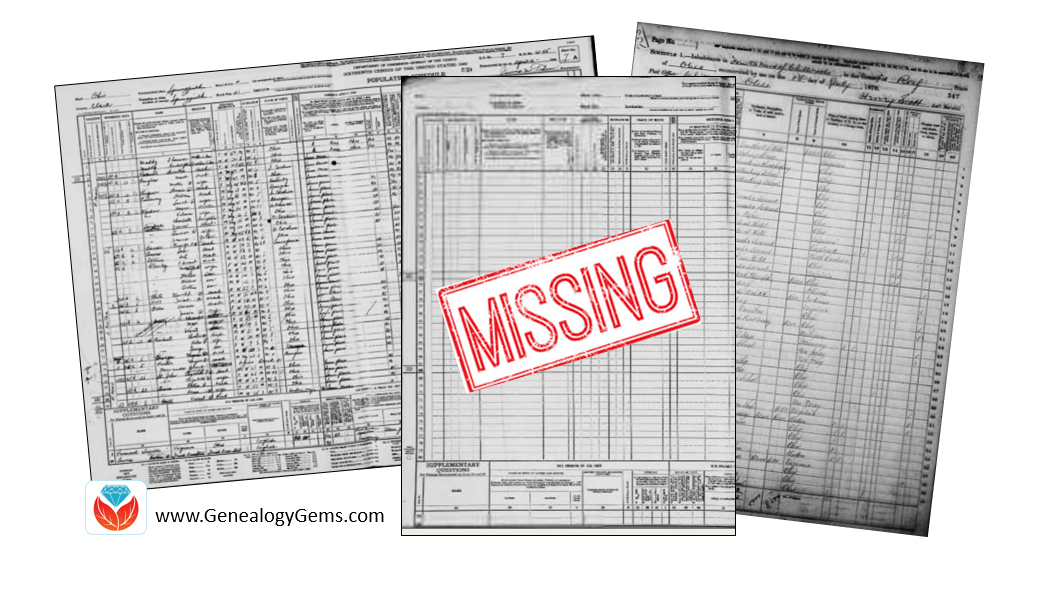 A Genealogy Gems reader doing genealogy research in New Jersey has lost her family! Well not literally, but she can’t find them in the 1940 U.S. Census. Here’s the email I recently received from her:

I am having a problem finding my mother and grandparents in the 1940 census. My grandfather, William Charles Opfer, was born on October 15 1900. I can find him in the 1930 census living in  Glouescter Township, (Unincorporated Grenloch) Camden County, New Jersey. He is living with his wife Kathryn (Katharine) Opfer and three children: William C Jr, Robert, and Nancy (my mother).

First, let me say how impressed I am with this Gem’s research and her dedication to finding this census report. She has made some very thorough searches and performed a number of advanced genealogical techniques in her quest for the 1940 U.S. Census page. It hardly seems fair that all that work didn’t yield the success she surely earned.

The government website she referenced is the National Archives 1940 Census page. The use of the page “1930 Records Search” allowed her to simply locate her grandfather in the 1930 U.S. Census. Then, by clicking a few buttons, discover the corresponding enumeration districts (ED) for the 1930 ED in which he and his family lived: 4-57, 4-58, and 4-61.

I, too, have scrolled through page after page searching for that one elusive name and we know how tedious that task can be! Using three different sites was a good strategy and one that we employ ourselves here at Legacy Tree Genealogists. Different images might be easier or more difficult to read, although in the case of these three EDs, the copies seemed to be uniformly easy to read.

The first two EDs were for Blackwood, an unincorporated part of Camden County, New Jersey. The third one was for the Lakeland Tuberculosis Hospital, unlikely to have housed the entire family, but certainly worth looking through in case one Opfer was a patient there.

ED 4-58 had an interesting variation at the end of the report. The last two pages were not 15A and 15B, as would be expected, but were 61A and 61B. This indicates these households were enumerated at a later date than were their neighbors. Because federal law requires every household to be counted, and because not everyone was at home when the enumerator arrived, the enumerator had to return on a different day and attempt to gather the necessary information for those families. They were recorded separately, beginning with page 61A.

People living in hotels, trailer camps, and other places normally designed for single-night stays were enumerated a week after the initial enumeration and those pages are numbered beginning with 81A. Not every ED has a 61 or an 81 page, but if you see one, now you know why the page numbers suddenly changed so dramatically.

The writer’s use of Elizabeth Shown Mills’ FAN Club was an excellent idea, too. FAN, an acronym for Friends, Associates, and Neighbors, takes advantage of the fact that people, in general, tend to remain geographically close to the people they know. [Read more about this in our post, “The Genealogy FAN Club Principle Overcomes Genealogy Brick Walls“] If a portion of a community moves, they tend to move together and relocate in the same general area of their new location. Her instincts to use this tool were excellent, even if they did not produce the desired results. This falls under the heading of “reasonably exhaustive research” and should always be included when someone, or in this case something, can’t be found, but should be there.

The fact that the researcher was able to locate only two of those neighbors could be explained, in part, by the fact that so many were in their 60s, 70s, and even 90s in 1930. They simply may have passed away in the intervening ten years. Another explanation, particularly for the working families, is that the Great Depression caused many families to move in order to find employment.

This may have been true for the Opfers. We noticed in 1930, William was employed as a supervisor for Reading Transportation. While supervisors were important to the operation of any transportation company, it is possible William found himself unemployed, as was true for millions of other Americans. If that happened, he and his family could have moved anywhere in the United States in an effort to find work. Alternatively, William may have left to find work while Kathryn and the children lived by themselves in reduced circumstances, or with family or friends.

To this end, I searched for William and Kathryn, and then each of the three children individually, in the hope of locating one or more family members. Using the “less is more” strategy which is often an important part of genealogical research, I searched with and without the family members’ ages, places of birth, and other family member’s names. Because the surname “Opfer” might have been misheard by the enumerator or grossly misspelled, I even searched for the various members of the family with no surname. Since we did not know where the family may have lived between 1930 and 1944, we included all of New Jersey, Delaware (the home state of Kathryn), as well as neighboring Pennsylvania and New York in our searches. The lack of positive results meant we needed to expand our search to the Eastern seaboard, and then the entire United States.

We also identified the names of William’s and Kathryn’s parents, William and Sallie Opfer and Raymond and Corrine Mason, and searched their households and neighborhoods for William and Kathryn. They were not there. Walter, William’s younger brother, was not hosting the family, either.

The writer had asked if it was possible that a page from the 1940 U.S. Census did not get scanned. Since the 1940 census has only been available for four years, it is still possible, although not probable, that there are one or more pages missing unbeknownst to anyone. Our research revealed only a few pages from a couple EDs in Ohio and South Dakota that were missing from the FamilySearch collection. There is no indication anywhere that there are missing pages from New Jersey. In addition, the pages in the three possible EDs for the Opfers were all included and in the correct numerical order, with no indication of any missing pages at the end. Therefore, I think we must conclude that missing pages do not explain the Opfer family’s disappearance.

Other Databases to Help

There are two other databases which might provide some insight into the location of the Opfer family. The first is the set of 1942 World War II draft registration cards. All men between the ages of 18 and 65 were required to register for this draft. The draft registration cards would have included the address at which William lived in 1942; however, there was no card for a man named William Opfer (or with only the surname “Opfer”) born between 1895 and 1905.

The final search was the database of city directories. A poorly-indexed city directory reported the Opfers lived in Haddonfield, New Jersey in 1943, but there are two directories contained in the same book, and the listing was actually for 1947. It reported William and Katherine lived at 209 Washington Avenue with their children William and his wife, Robert, and Nancy. William’s brother, Walter, and his wife Edith lived nearby. Unfortunately, the search for them in 1940 revealed that 79-year-old widower William Pape lived at that address with his household servants who were not the Opfer’s.

Although the turmoil and upheaval of the Great Depression meant families were scattered, and it would have been easy to miss enumerating many households in the mid-1930s, by 1940 the U.S. was recovering from the effects of the Depression. Some agencies, such as the Works Progress Administration (WPA) and the CCC (Civilian Conservation Corps), were in place to provide work for men. Many war-related industries on both coasts were revived by the Allies’ efforts to stop Hitler.

In other words, there should have been work and stability for the Opfer family by 1940, and they ought to have appeared in a census report. The evidence of the 1930 census and the 1947 city directory strongly suggest they remained in or close to New Jersey, but all of the efforts to locate them have failed to yield positive results.

One possible scenario which would explain the Opfers apparent absence from the 1940 census is a simple one: perhaps the family was in the process of moving from one location to another in the month of April when the census was enumerated. Although the census was supposed to be enumerated on 1 April, the reality is that it was simply impossible to knock on every door and obtain the necessary information in one day. Some enumeration districts were fully counted by the 4th of the month. Other places were not completed until the 30th. This was true even in the same town.

More About Kate Eakman at Legacy Tree Genealogists and SAVE $100!

Kate Eakman grew up hearing Civil War stories at her father’s knee and fell in love with history and genealogy at an early age. With a master’s degree in history and over 20 years experience as a genealogist, Kate has worked her magic on hundreds of family trees and narratives.