Why I Wish the DAR DNA Policy Was a Little Different 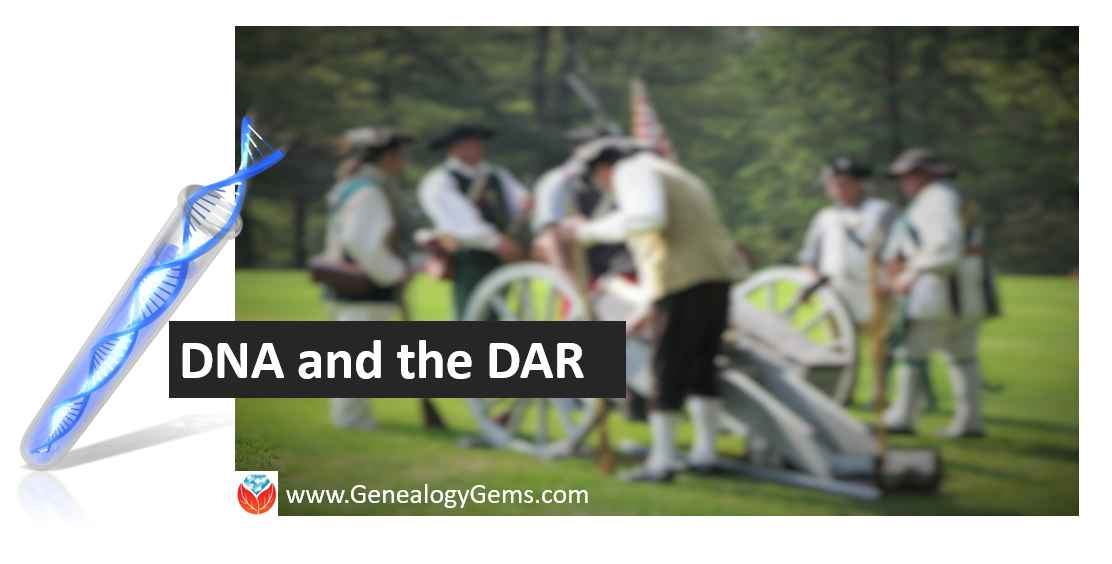 The Daughters of the American Revolution (DAR) accepts limited DNA evidence to prove descent from a Revolutionary War veteran. In my opinion, the DAR DNA policy is a little too limited. Here’s why–and what you can do.

Membership to the Daughters of the American Revolution (DAR) has been a holy grail for U.S. genealogists for 125 years. With its requirement of proof of a “lineal bloodline descendant from an ancestor who aided in achieving American independence” in three categories: birth, marriage, and death, as well as proof of Revolutionary War Service, membership is exclusive to those with an iron-clad paper trail.

That is, until 2014, when the DAR added DNA evidence to its list of acceptable documents proving a relationship to a Revolutionary War ancestor.

The DAR only accepts one of the three forms of DNA testing which is the Y chromosome test, or YDNA. The YDNA traces only a direct paternal line, making it a great choice when trying to link living males with their Revolutionary counterparts. This YDNA is basically passed unchanged from generation to generation, making the modern day holder of the YDNA the proud owner of possibly exactly the same YDNA that fought the Redcoats. That’s pretty cool, don’t you think?

The DAR recently announced that to further help those wanting to use their YDNA as part of their application, they have formed a project at Family Tree DNA, the company that provides the YDNA testing. Projects are absolutely the best way to get the most out of your YDNA testing. There are surname projects, location projects, haplogroup (deep ancestral group) projects, and even special interest group projects, such as this one for the DAR.

While the results of the testing are only available to members of the group, the statistics page gives us an idea of the scope of this project. They currently have 1,242 total members and what looks to be about 430 YDNA tests completed (though it is admittedly difficult to tell based on the chart online.)  This means if you think your paternal line may be a candidate for the DAR, you can have a representative of your line tested and compared to the group. If you find a match, you will have relative certainty that you do connect to that Patriot, and can then be more confident in your traditional research in pursuit of the necessary paper connections.

In April the DAR opened up project membership to include mtDNA and autosomal DNA. They will not be using these two kinds of DNA in their applications (yet), but hopefully this project will pave the way for the addition of those tests in the future (though, for several reasons, inclusion of these tests in the application process will be more difficult.)

Though, in all honesty, they have made the YDNA process difficult enough. Let’s say that you are actually able to trace down multiple generations to find a direct male descendant of your Revolutionary guy to be tested, an individual who is, the DAR mandates, “sharing your maiden name or your mother’s maiden name,” and you convince that unassuming relative to give up his saliva, you still are only half way there. The DAR guidelines also state that you have to have a second individual who is “a descendant of the same Revolutionary War ancestor through a different unbroken male lineage that has been previously proven on a DAR application…” (I added the emphasis here.)

OK, so let’s say you are a genealogical whiz and, let’s face it, you were lucky, and you find two such candidates and have them tested.

Well, the DAR tells us that those two men must match EXACTLY on the 37 YDNA markers tested. Now there is no telling when that YDNA might experience a mutation. So to me it seems a little unfair to require perfection. So it is possible, that even after all the work of finding the right guys to be tested, the test itself may work against you, as even one difference is enough to keep this YDNA off of your application, at least for now.

So while I applaud the DAR for using YDNA testing at all, and for spearheading a special interest project at Family Tree DNA, the reality is that the limitations of direct paternal line genealogy and the requirements of testing make it unlikely that very many will be able to take advantage of the YDNA in their DAR applications.

However, there are a few things you can take away from this article now:

I am Diahan Southard, Your DNA Guide, and the author of a series of genetic genealogy quick guides. My guide called Y Chromosome DNA for the Genealogist is the perfect tool to help guide you through the testing and analysis process. Click here to learn more about this guide and here for all of my guides, or click here to learn more about my series of how-to videos, also available to Gems fans for a special price.

Thanks for sharing this post with your genealogy friends who do DNA research (especially those who may have Revolutionary War ancestors!)