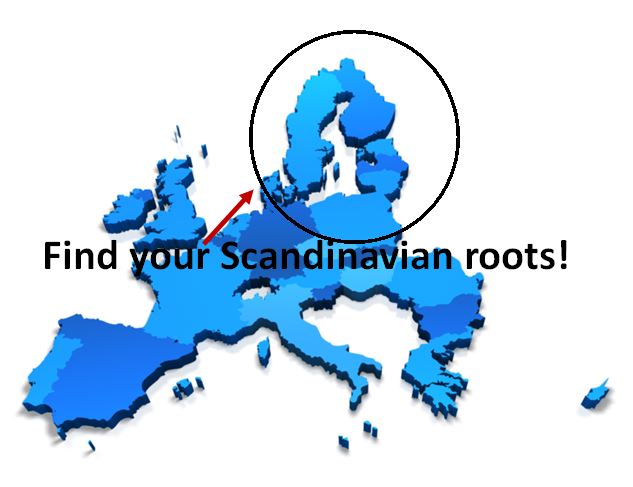 There has always been something mysterious about cemeteries. Perhaps the knowledge that those interred took secrets to their grave has resulted in the enigmatic haze that seems to linger over these peaceful resting sites. But it’s not just the dead that hold secrets. Cemeteries themselves are often home to puzzling (and sometimes spooky) features.

Joy Neighbors, author of the book The Family Tree Cemetery Field Guide shares three of her most shocking finds while scouring cemeteries for genealogical clues.

We think of cemeteries as quiet tranquil places. As a “Tombstone Tourist,” I’ve spent years in cemeteries searching for genealogy clues, exquisite artwork, stunning vistas, and that perfect photograph. A trip to the graveyard is never boring. I’ve come back with tales of beauty, delight, and terror. Here are just three shocking discoveries I’ve made while searching in cemeteries.

There’s a cemetery in Kentucky that holds a baffling find; three 19th century mausoleums that have disappeared right in the middle of the grounds. 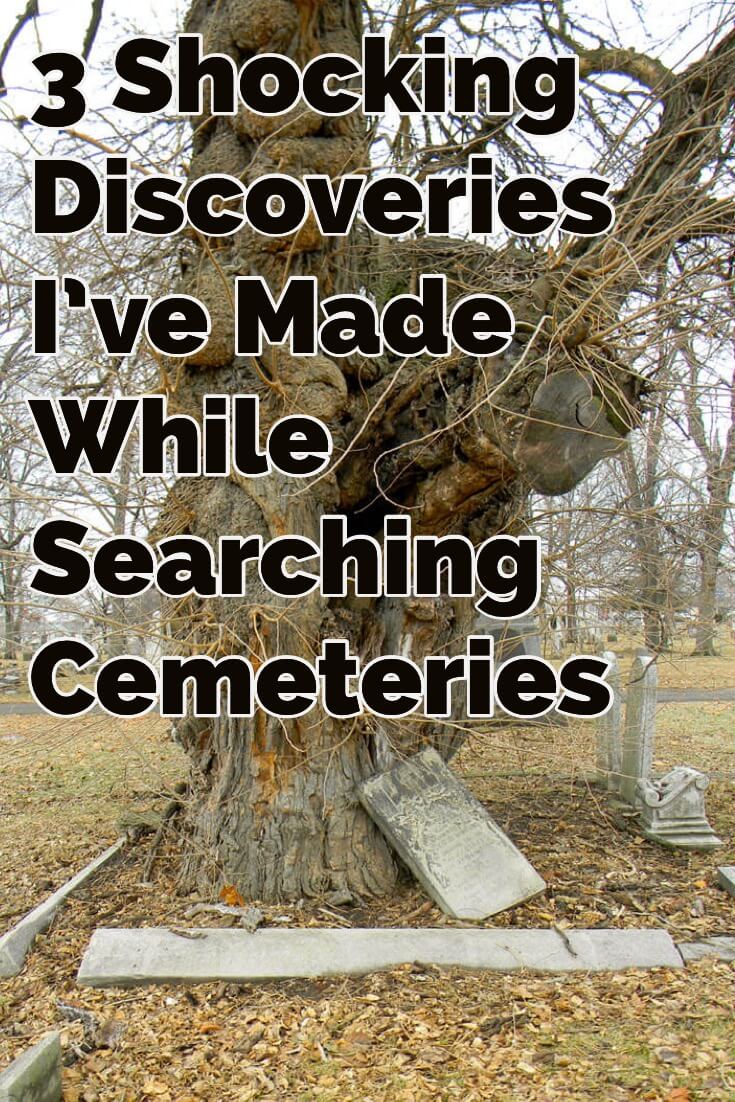 On a humid July day, I stepped inside a grove of trees to escape the searing heat. Inside that cool dimness stood three stately mausoleums, each with a façade protruding from a hill now enveloped in trees, vines, and shrubs. This thicket had been growing untamed for years.

The mausoleums stood side-by-side. The first was a small brick crypt with a surname above the entry along with a date “1895.” But the tomb had been bricked up for so long, trees grew on top obscuring its existence. 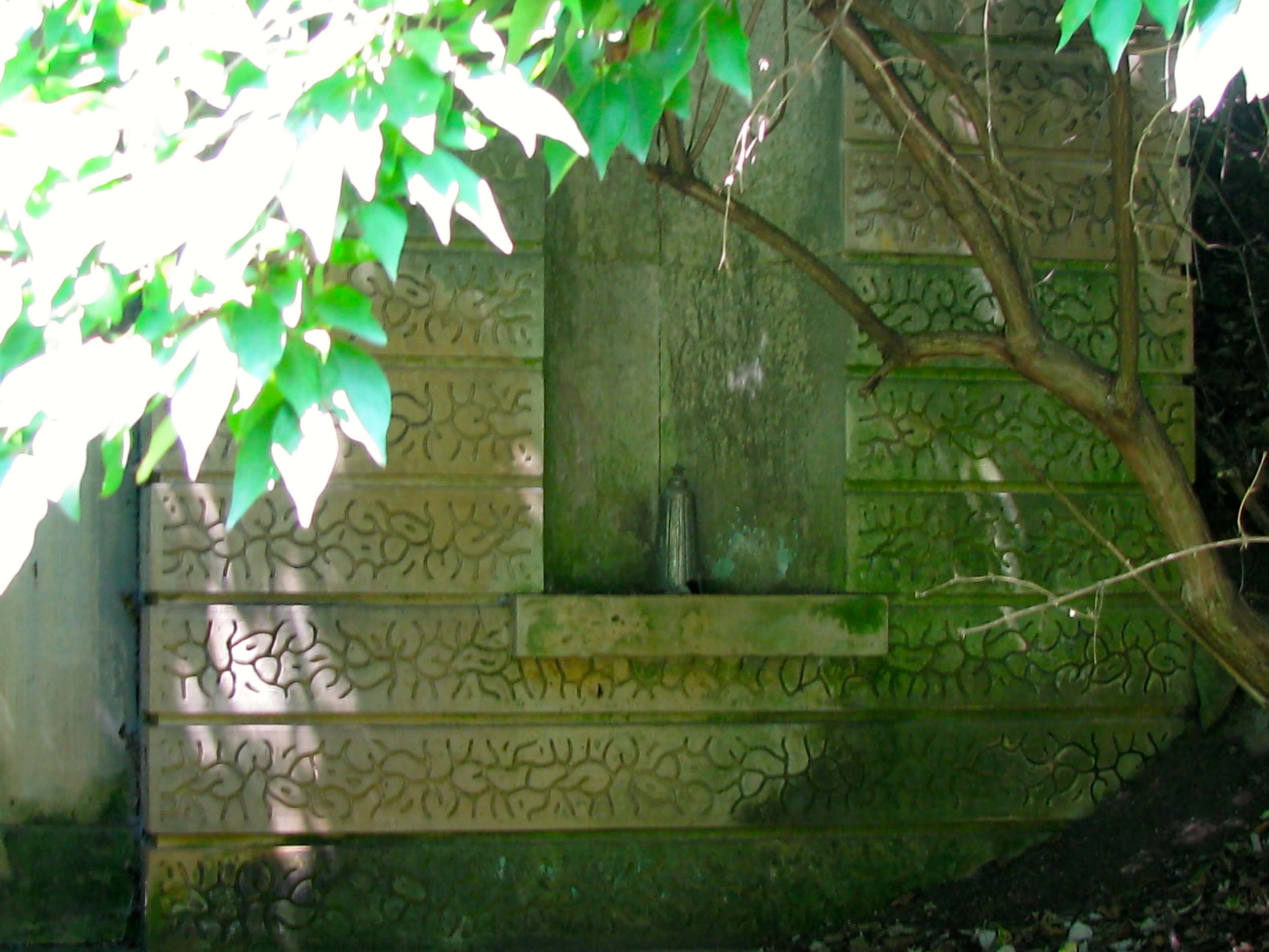 The middle mausoleum was built from pressed concrete with niches and arches along the walls. Again, the doorway and windows were bricked shut against the onslaught of trees and ropy vines that brushed and clung to its surface.

The third mausoleum was constructed of plainer concrete set off in a corner. No names or dates were visible but trees blocked any approach. It was visible only through a tangle of vines and foliage.

Who had these monuments been for?

Why had they been abandoned?

Had the bodies been moved when family members relocated?

Or were they simply forgotten?

Perhaps no one left payment for special care in perpetuity.

Apparently, what has been lost and forgotten shall remain so.

2. The Grave in the Middle of the Road

Having grown up in Indiana, I can assure you that Hoosiers are a practical lot. But there’s one roadside attraction that will cause the most stoic of residents to stop and ponder the audacity and fortitude it took to keep a grave in the middle of the road for close to 200 years.

The story began in 1808 when Nancy Kerlin married William Barnett, the great, great, great grandson of Pocahontas and John Rolfe. 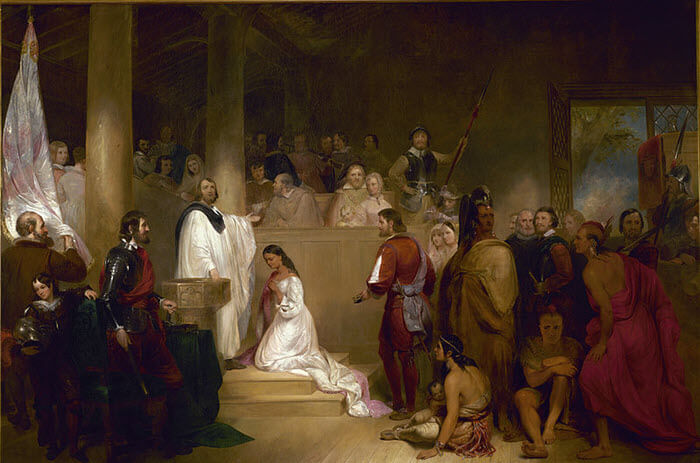 They settled near what would become Amity, Indiana to raise their family.

Nancy died on December 1, 1831 and was buried on top of a small hill overlooking Sugar Creek, one of her favorite spots. Soon others were also buried here and over the years a small county cemetery developed.

But then progress reared its head around the turn of the last century and Johnson County decided that a road needed to be built to connect Amity with other thoroughfares. This meant the grave had to be relocated.

Nancy’s grandson, Daniel G. Doty had a problem with that.

Doty went to the county and voiced his opposition. Nothing changed so he decided to take matters into his own hands. When county work crews arrived they found Doty sitting on his grandmother’s grave – with a loaded shotgun. Again, Doty told the county that his grandmother would stay where she was. If they insisted on trying to move her grave, they would have to deal with him. With that prospect, county workers agreed to let things “rest” where they were.

A concrete slab was placed over the grave in 1912 to protect it.

An historical marker was added in 1982, and Nancy became an anomaly.

But three years ago, after numerous reports of accidents, something had to be done.

In 2016, Nancy’s grave was temporarily moved to widen the road. It was the perfect time for University of Indianapolis archaeologists to see just what was buried there.

Amazingly, they discovered that residents have been driving past not only Nancy’s grave but also the remains of six others – a man, a woman and four children. Was this the Barnett family? No one’s said for sure but the state has now designated this small spot in the middle of the road a family cemetery. 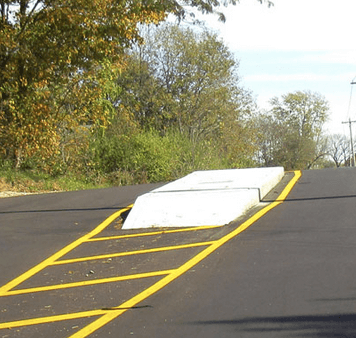 The Grave in the Middle of the Road

In Terre Haute, Indiana there stands the most massively disfigured cemetery tree I’ve ever encountered. Though its genus is no longer identifiable, it stretches at odd angles as if reaching out in despair.

It was a frigid January day when I encountered what I have since called  “The Tree of the Dead.”

I’d been taking photos when my husband waved me over to see his find. Over the years I have seen hundreds of ominous cemetery trees, but none like this. This tree was surely waiting for the headless horseman to plunge through that opening with a rush of fetid air as he continued searching for his head.

Stepping closer, I attempted to take a photo, but the tree was having none of it. My camera shut down immediately. There are several explanations for this common cemetery occurrence; the batteries are too cold, connections are corroded, post seals are damaged, or spirits are sapping energy attempting to manifest. Yes, well … but after changing the batteries two more times, I had yet to get one picture.

My husband thrust his camera into my hands and I was able to get two photos before the batteries died. One shows the tree in all of its appalling façade with twisted limbs reaching akimbo to the sky. (Notice the limb with a dragon’s head at the end?) 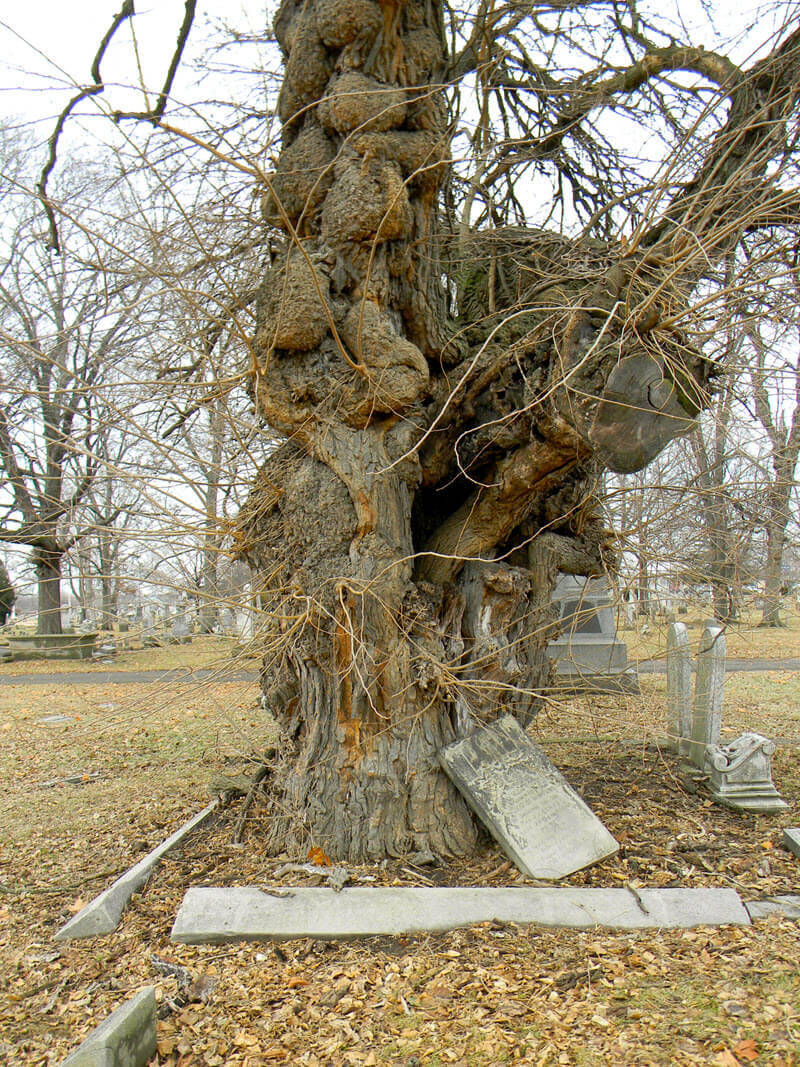 The second shot shows the opening in the middle of the tree: a bizarre heart shape. And the mishmash of tombstones scattered around the plot date to the late 1800s but names are indecipherable.

Who is buried here?

What happened to give the tree such an appearance?

Could it be caused by a decades-old drought?

Maybe arsenic used to embalm bodies back in the 19th century slowly leaching its way up into the tree?

Or could it be … something else?

A visual reminder of how perilously close fact and fiction are entwined in the graveyard. 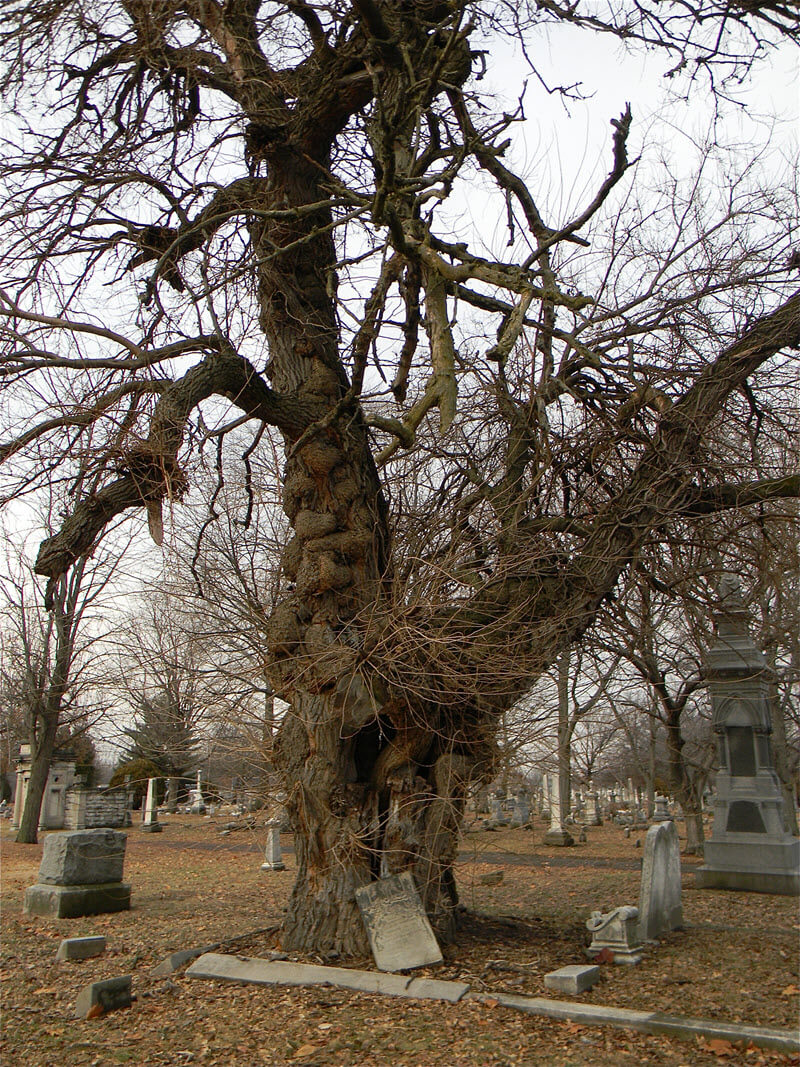 Cemeteries hold a vast amount of secrets, most of which we may never know. But the genealogist’s pursuit of answers means we’ll never stop exploring and asking the questions, and perhaps one day, those secrets taken to the grave may be revealed.

Cemeteries are crucial for any genealogist’s search, and The Family Tree Cemetery Field Guide by Joy Neighbors will show you how to search for and analyze your ancestors’ graves. 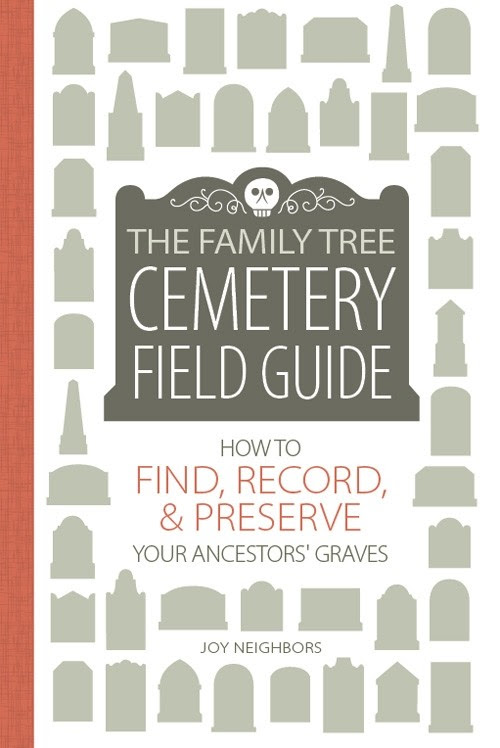 Discover tools for locating tombstones, tips for traipsing through cemeteries, an at-a-glance guide to frequently used gravestone icons, and practical strategies for on-the-ground research. And once you’ve returned home, learn how to incorporate gravestone information into your research, as well as how to upload grave locations to BillionGraves and record your findings in memorial pages on Find A Grave.

About the Author: Joy Neighbors is a national speaker, author, freelance writer, blogger, and avowed Tombstone Tourist.  Her book, The Family Tree Cemetery Field Guide focuses on how to locate cemetery records, what to do when you get to the cemetery and how to understand the silent language of the stones. She also shares a few stunning family secrets along the way. Joy also writes the weekly cemetery culture blog, A Grave. 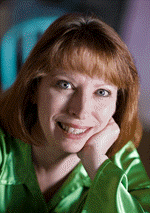