How to Write Family History More Powerfully: Tips from a Master Storyteller

Wish you could write family history like a master storyteller? Take a page from best-selling novelist Fannie Flagg’s fiction-writing. These three steps will help you bring your ancestors’ stories to life, so that their stories become as compelling to your relatives as they are to you. 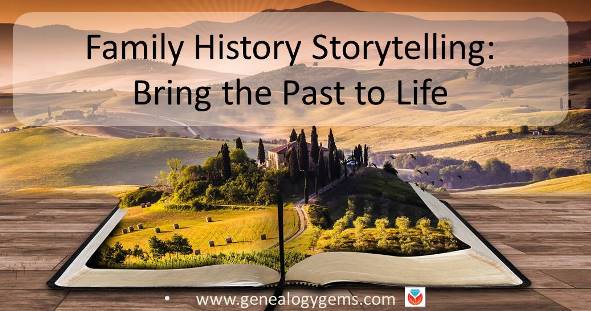 Powerful storytellers create characters so vivid, we miss them when we finish reading. They take us into worlds that become just as real. Experiencing their stories changes us, even if just subtly. Fannie Flagg is one of this generation’s great storytellers, and she does all three of these things in The Whole Town’s Talking, our current Genealogy Gems Book Club title. The book is an excellent example for family history storytellers who want to bring their own ancestors to life in narratives that captivate and change their own loved ones.

Lordor Nordstrom seems an unlikely hero at the beginning of The Whole Town’s Talking. He’s a 30-something single Swede who has come to the heartland of the U.S. to build a life. He’s a quiet man, a hard worker who starts a dairy farm. But then he starts to stand a little straighter and attract people his direction because he has a dream of what his world should look like. He places ads in newspapers and convinces other Swedes to settle nearby. Swedetown is born around him. We start to see that his quiet determination and vision are accomplishing great things for himself and others. Then this quiet, unprepossessing fellow gets up the nerve to place another newspaper ad:

Swedish man of 37 looking for Swedish lady for marriage. I have a house and cows.

But when he gets a response from a “24-year old Swedish lady of the Lutheran faith,” he starts to sweat and stammer and second-guess himself. He gets his picture taken: he looks like a hayseed. He gets a haircut: the bowl-cut style was a bad idea. But he persists despite feeling totally unready for the sweet, refined young lady who, after more stammering and shyness, eventually and very willingly becomes his bride.

Think of an ancestor you want to write about. What do you know about him or her? Do you know she was born in a tiny village, or that he lost three siblings at once in a cholera epidemic? Do you know he was the first in the family to learn to read? Or that her husband disappeared when she had three children and one on the way?

You have to pay close attention to historical records to notice those kinds of details. You also have to think about and make connections between different events. That’s how you’ll realize those three siblings all died at the same time, and that not long after, he left school to take care of his family. Then you can start to create a “character” out of those scrawled names and details in all those old records.

Write down 5-10 specific details you know about an ancestor. If you can’t think of any, start scrutinizing historical records. Note physical details in military records or passport applications. Did he naturalize? Could she read English? How old were they when they married? Construct a timeline and make connections: “Oh my, he lost his wife in childbirth at the same time his father died. Suddenly he was caring for both his 82-year old mother and a newborn!”

Fannie places the story of Lordor and his want-ad bride Katrina in the beautiful but largely unknown American Midwest. The future of that country was as unwritten as the future of this couple. Gradually a small immigrant town comes into being, content to be its modest, friendly self. Fannie tells us about Main Street, the local businesses, the churches, the town’s main families and how they are related. We get just enough gossip to feel we know the people. In fact, we can imagine ourselves stopping in to gossip over a fence or attend a church potluck. The things that happen to the characters are more imaginable because we can picture the setting.

The story of Lordor and Katrina doesn’t just unfold against the settling of the Midwest frontier, though. As the narrator, Fannie Flagg puts Lordor and Katrina’s marriage into historical context, too. They were like many mail-order couples during a period of great change and movement in American history, she says:

On both sides, it was a desperate game of chance. But, surprisingly, many marriages did work out, and the results helped populate the country with a hardy and adventurous stock. People were willing to travel anywhere, sacrifice anything, to own their own land, to be free and be independent.

Though Fannie is writing fiction, she’s writing within a real historical world that she researches and loves to bring to life.

We, too, can paint detailed portraits of our ancestors’ lives on a broader canvas of history. Do some reading about the history of the town and region. Look for trends or patterns or events that would specifically have affected your ancestors, based on where they lived, their ethnic or religious identity, financial status, gender, etc.

Click here to read more tips for learning the history surrounding your ancestors’ lives: Tell Your Ancestor’s Story: Use Social History for Genealogy

3. Give readers something to think about, or a reason this story matters.

The title of this story–The Whole Town’s Talking– doesn’t just refer to neighborly gossip on the streets and church pews of Swedetown (which eventually becomes  Elmwood Springs). The key to this story is what happens at the town cemetery, on a hill overlooking the town on land donated by Lordor. After town residents die, we meet them again when they “wake up” in their cemetery plots. They still have their memories and personalities. They banter with each other and fawn over loved ones who come to visit their graves. They keep up on town gossip and their grandchildren and changes in society as best they can.

What I took away from this delightful scenario is the idea that family love persists past the grave. That memories of loved ones we honor at a cemetery may just be powerful enough to keep them there and, in a sense, alive. That they continue on.

It’s not always easy to find a running theme, meaning, or message in a life you’ve researched. After all, you don’t see the whole thing. And most lives don’t unfold along a single theme. But if you’re excited enough to write about an ancestor, something about their story moves you. What is it? Try to put your finger on it. And then write about it, like this short passage about my own ancestor:

“What I see in Thomas Selby’s life is a man who never stopped moving or building. The challenges and opportunities of the frontier were to him an open door, beckoning to him. He started life with no apparent advantages, given away by his mother. That didn’t seem to dim his confidence. He was apparently uneducated, yet he studied law and argued a case before the Ohio supreme court. He bought up land and established friendships in southeast Ohio, then lit out for the California Gold Rush. He failed dramatically: the shipload of flour he took to sell the Goldrushers spoiled and he apparently had to walk all the way home. It took him seven years. But being broke didn’t stop him from buying homestead land in Missouri on the way home and immediately relocating his family. Eventually he settled there and spread his energies into creating enterprises: a flourishing farm, a general store, and judgeship.

I also see a man who seems to have totally excluded his wife and children when making decisions about the future. It was a common attitude for his time. But I think of him striding up to his yard on an evening seven years after disappearing, ragged and worn from the road. Family lore says he saw his wife come to the door with a gun and yelled, “Don’t shoot, Huldy, it’s me!” But if I were Huldy, finding out it was him–and that he’d just decided to move me into the wilderness without even consulting me–might just have made me pull the trigger.”