May is Mystery Month, so the Genealogy Gems Book Club is spotlighting a favorite genealogical mystery series writer: Nathan Dylan Goodwin. In his latest, forensic researcher Morton Farrier finally confronts his own past. 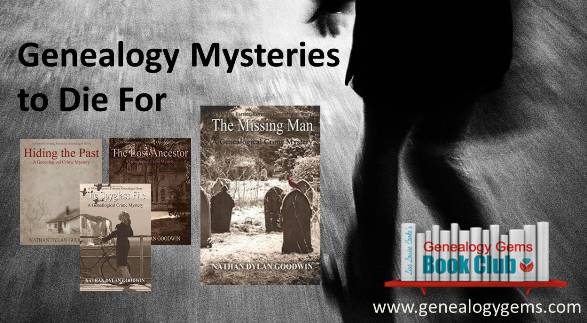 We first met British novelist Nathan Dylan Goodwin when we featured his novel The Lost Ancestor in the Genealogy Gems Book Club. The hero, Morton Farrier, is a forensic genealogist. He’s dogged, thorough and totally likeable. Morton now appears in an entire series about his research adventures–both his professional ones and his personal ones. We think they’re all worth reading! Enjoy them individually–or grab the value bundle on Kindle. 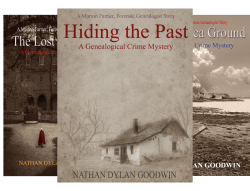 Here’s the lowdown on the full series or Morton Farrier mysteries, in order:

Hiding the Past. In this debut novel, we meet British genealogist Morton Farrier. He’s tenacious and thorough, qualities that make him an excellent investigator–but put him in danger when he starts investigating the mysterious identity of Peter Coldrick. Despite the clear danger to himself and his tough-and-adorable fiance Juliet (a police officer), Morton won’t back off. Meanwhile, he learns a startling truth about his own roots. 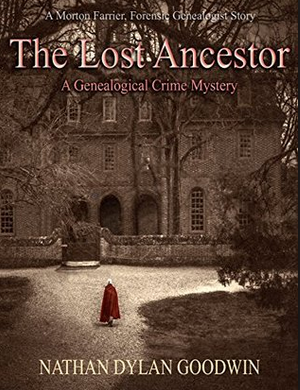 The Lost Ancestor. Morton is hired to find out what happened to his client’s great-aunt Mary, who disappeared without a trace a century ago while working as a maid at a grand English estate (gotta love the Downtown Abbey-style drama!). This is the book we featured in the Genealogy Gems Book Club, which Nathan talked about in the Genealogy Gems Podcast episode 180 (free excerpt) and the Genealogy Gems Premium Podcast #124 (subscriber-only). 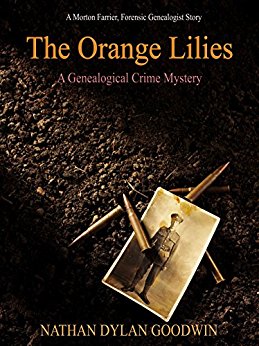 The Orange Lilies: A Morton Farrier novella. Morton confronts a long-standing mystery in his own family–one that leads him just a little closer to the truth about his personal origins. This Christmas-time tale flashes back to Christmas 1914: World War I, to a turning point in his relatives’ lives. Don’t miss it!

The America Ground. A no-man’s piece of land–formed from the sea as Hasting Harbor silted in–became home to a lawless neighborhood where a woman was killed more than 180 years ago. It falls to Morton Farrier to uncover her story. Distracted by the unfolding mystery of his own parentage, he doesn’t realize the danger he’s unwittingly stumbled into until it’s almost too late.

The Spyglass File: A Morton Farrier novella. A client’s unknown past leads Morton to a young woman’s secret mission during World War II. Her name ends up in the mysterious Spyglass File, a subject so dangerous that Morton has bad guys after him as soon as he starts prying. He may or may not get kidnapped right before he’s supposed to marry the lovely Juliette. Meanwhile, Morton anguishes over the continuing mystery of his own roots.

The Missing Man. Morton Farrier can’t wait any longer: he must unravel the mystery of his own past. Who is his American father and why did he disappear from his mother’s life, despite letters evidencing his devotion? What, if any, role did a devastating house fire play in his disappearance? Morton and Juliet head to the east coast in the United States to confront surviving relatives, learn what they can about Harley Jacklin and help Morton come to terms with whatever he discovers.

What does Nathan Dylan Goodwin read?

On his must-read list of genealogical fiction are two we’ve mentioned on the Genealogy Gems Book Club page:

by Stephen Molyneux. Peter, a genealogy buff, buys a marriage certificate on display at an antiques gallery. He begins researching the couple with an idea of returning the certificate to them. Eventually he uncovers several secrets, one with some money attached to it, but others are also chasing this money. Surprise twists bring the story into the present day and Peter has a chance to become a hero.

The Forgotten Garden, a novel by Kate Morton. Recommended by a Gems fan. The premise was inspired by Kate’s own family history: “A tiny girl is abandoned on a ship headed for Australia in 1913. She arrives completely alone with nothing but a small suitcase containing a few clothes and a single book—a beautiful volume of fairy tales. She is taken in by the dockmaster and his wife and raised as their own. On her twenty-first birthday, they tell her the truth, and with her sense of self shattered and very little to go on, ‘Nell’ sets out to trace her real identity.”