Many American families have a tradition of Native American ancestry. Now, Fold3.com has made access to their Native American records collections free between November 1 and 15th. Here are the step-by-step instructions you need to know to effectively navigate the Eastern Cherokee Applications collection at Fold3.com. 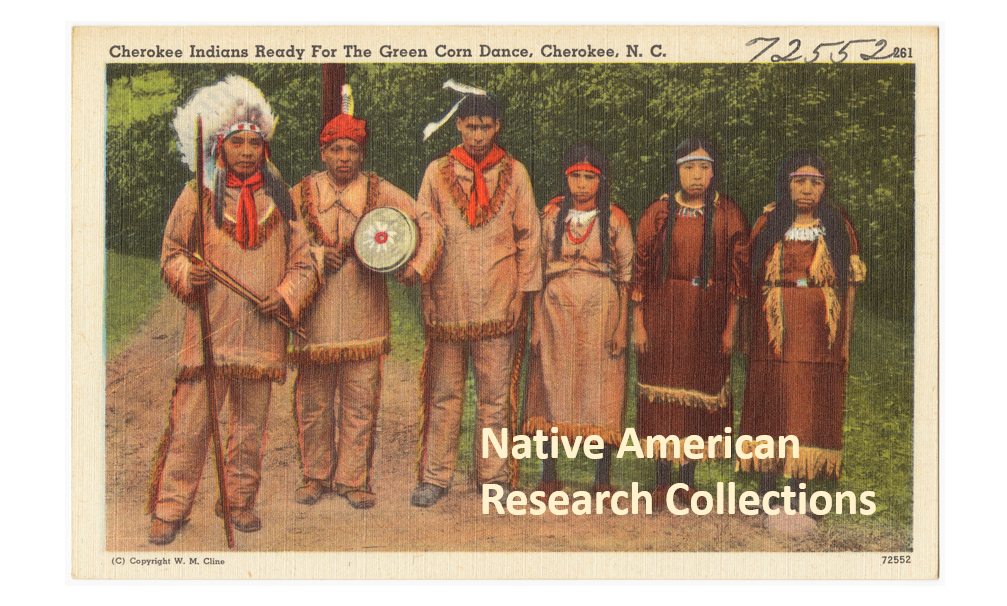 Our goal is to open the doors to using all types of available genealogical records, and provide you with the skills to explore them with confidence. Our Genealogy Gems team is excited to share with you the opportunity to utilize the free access to Native American records on Fold3.com. While it can be difficult and confusing to know how to navigate these important records, this post will provide you with information to get you started and to feel a little more comfortable jumping in! Now, let’s get started.

The courts ruled in favor of the Eastern Cherokees and the Secretary of the Interior was tasked to identify the persons entitled to distribution of funds. The job of compiling a roll of eligible persons was given to Guion Miller.

It is interesting to note that the funds were to be distributed to “all Eastern and Western Cherokee Indians who were alive on May 28, 1906, who could establish the fact that at the time of the treaties, they were members of the Eastern Cherokee tribe or were descendants of such persons, and that they had not been affiliated with any tribe of Indians other than the Eastern Cherokee or the Cherokee Nation.” [Source: page 4, 3rd paragraph of NARA document Eastern Cherokee Applications of the U.S. Court of Claims, 1906-1909.]

The collection at Fold3 titled “Eastern Cherokee Applications” contains these applications submitted to prove eligibility. [Important: Because this act was about money allocation and individuals filling out these applications would have received money if approved, this may raise the question, “Did our ancestor have a reason to lie or exaggerate the truth so that they might be awarded funds?” Further, the Genealogy Standards produced by the Board for Certification of Genealogists (BCG) reminds us: “Whenever possible, genealogists prefer to reason from information provided by consistently reliable participants, eyewitnesses, and reporters with no bias, potential for gain, or other motivation to distort, invent, omit, or otherwise report incorrect information.” [2] In this case, those filling out the Eastern Cherokee Applications did have potential for gain. So, be sure to take any genealogical data, like names, dates, and places, with a grain of salt and find other documentation to back-up the facts.]

The first step in locating whether your ancestor applied is to check the index. If you are not a member of Fold3.com, you will first need to go to www.fold3.com. Click in the center of the homepage where it says, “Free Access to Native American Records.” Next, on the left you will see “Records from Archives.” Go ahead and click that.

From the list now showing on your screen, choose “Eastern Cherokee Applications.” Then click “learn more” at the bottom right of the collection description.

From the new screen, choose “Browse by title.”

Scroll through the digital images of the index and find the surname of your targeted ancestor. For example, my ancestor’s last name is Cole.

You will see the state they were currently living in and a number listed to the left of each name. This number is what you will need to find the application of your ancestor. In the example here on the left, Anderson Cole’s number is 31697. Though the step of using this index could be omitted, I wanted you to know how to use it. 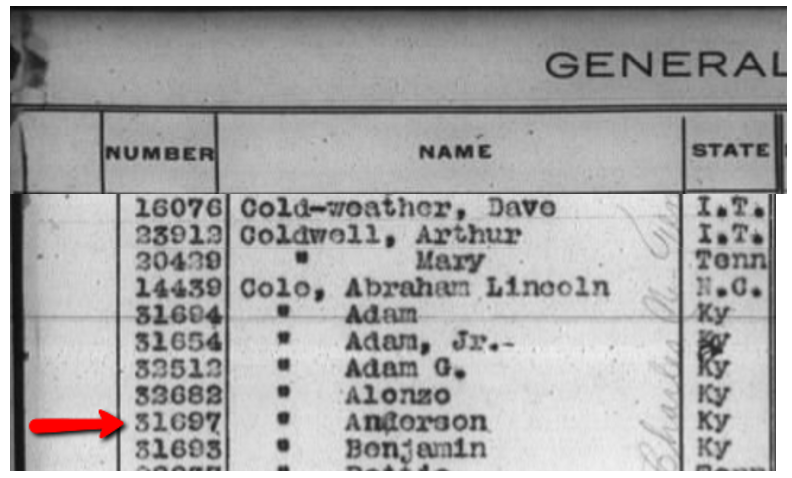 Anderson Cole’s name appears on the General Index of the Eastern Cherokee Applications.

Armed with this number as confirmation, let’s go back to the list of options and this order medication online for pain time, choose Applications.

Applications are broken down by the first letter of the surname, so in my case, I would click on the letter C and then from the new options list, click the appropriate indicator until I reach Anderson Cole.

Anderson’s application is eight pages, however applications vary in size from fewer than eight to several more.

From Fold3.com, you can see each page of the application. Some of the information you may find on the applications include, but is not limited to: name, birth date and location of applicant, names of parents and siblings, name of spouse and marriage date and place, tribe affiliation, Cherokee name, grandparents names, and residences.

The application was sent in to the Commissioner of Indian Affairs and then it was decided whether the applicant was eligible or not. 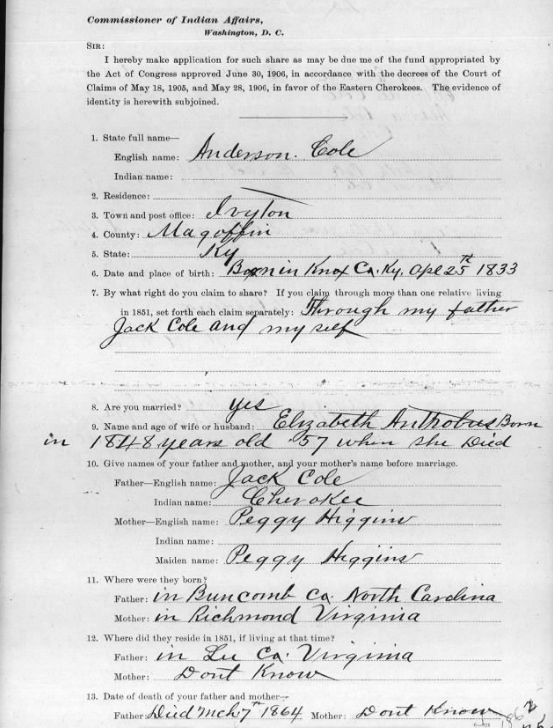 In Anderson Cole’s case, he was rejected. This is found on the very first page of the application. In other words, the commission did not find him able to prove his relationship with known members of the Eastern Cherokee tribe and therefore, he was not given any allotment of money. This rejection neither proves or disproves whether Anderson was of Native American descent. However, it does suggest that something in his lineage was questioned.

Further, when reviewing the information recorded on any genealogy record, we must ask the question, “Did this person have any reason to lie?” When money is on the line, lying is always a possibility. According to further research, it appears Anderson either lied, omitted details, or was seriously mistaken about many names and dates of close family members. Even then, there are some great hints within the pages of his application and I was happy to find it.

In addition to an application being filed for our ancestor, if the ancestor had children under the age of 21, they may have also applied in behalf of the child as a Cherokee Minor.

Anderson’s son, W.T. Cole, applied under the same application number as Anderson. I found his application in the last pages of Anderson’s file. This type of record is direct evidence of a parent/child relationship and can be a wonderful substitute when other vital records can not be located. However, direct evidence (which is anything that directly answers a specific question…like ‘who are the parents of W.T. Cole?’) does not have to be true. In this case, just because Anderson says his son is W.T. Cole, doesn’t mean it is absolutely true. We should always find other records or evidence to back up our findings.

You may have noticed that besides the Eastern Cherokee applications and general index, there is also a record set titled “Roll of Eastern Cherokees.” Another name for this roll is called the Guion Miller Rolls. This is a roll, or list, provided by commissioner Guion Miller of all those who were approved to receive the allocated money. [We will be discussing the Guion Miller Roll Collection from Fold3 in a later blog post. Be sure to sign-up for our free newsletter so you don’t miss it!]

Anderson Cole and his son do not appear on this Roll of Eastern Cherokees. If however, your ancestor does, additional information on this roll could include application number, the names of minor children, ages of all parties, current residence, and a death date.

A partial page of the Roll of Eastern Cherokee found online at Fold3.com.

Using Native American collections for genealogy research can be challenging. We hope this has helped you to better understand the ins and outs for using the record collections at Fold3. For even more helpful tips, read: 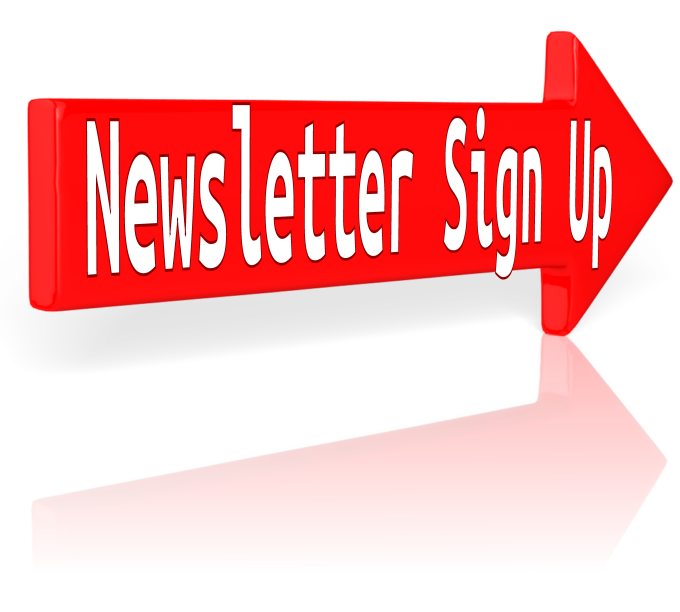 Stay tuned as we bring you additional instructions for exploring the Guion Miller Roll and Indian Census Rolls at Fold3.com in the days to come. Sign up for our free Genealogy Gems newsletter for our upcoming posts on this important subject.