Celebrating Women in US Military History

Our female ancestors in the U.S. military had to serve incognito. Only in the 20th century have women served openly and with greater frequency—and in combat roles. Here, military expert Michael Strauss salutes the women who have bravely served, including one in his own family.

In times of emergency, men primarily bore arms in U.S. history. However, not all women filled the traditional roles relegated to them by society. From the days of the Revolutionary War, any woman who chose to fight would have to disguise herself as a man. This was the case of Deborah Sampson, who served under the alias of Robert Shirtliffe until she was discovered and discharged from the Army.

Other women, such as one named Margaret Corbin, were camp followers and served by cleaning and cooking. During the battle at Fort Washington in New York, her husband John was mortally wounded while manning his artillery piece. Margaret took his place on the gun, continuing the fight against the British. For both women their sacrifice was not forgotten; each was awarded pensions from the Government based on their military service–although Corbin received only half of the pension allowance because she was a woman. 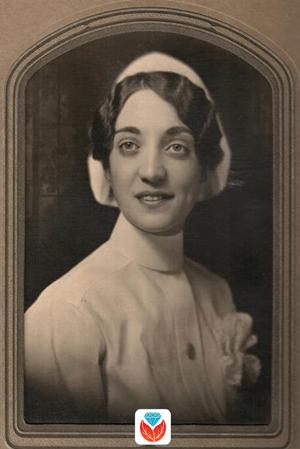 During the Civil War, women again sought to join the ranks of the military. Take, for example, Jennie Irene Hodgers, a native of Ireland who enlisted in Company G of the 95th Illinois Infantry, where she served using the alias of Albert Cashier. Her identity was kept secret during the entire war. It wasn’t until she was much older—in 1911—that a doctor discovered she was actually a woman.

The turn of the twentieth century had women more accepted in the ranks of the Army. The establishment of the Nursing Corps in 1901 saw the first large scale enlistment of women.  Still later in World War II was the forming of the Woman’s Auxiliary Corps (WAC) and the Women Air Force Service Pilots (WASPS) who flew to great heights. 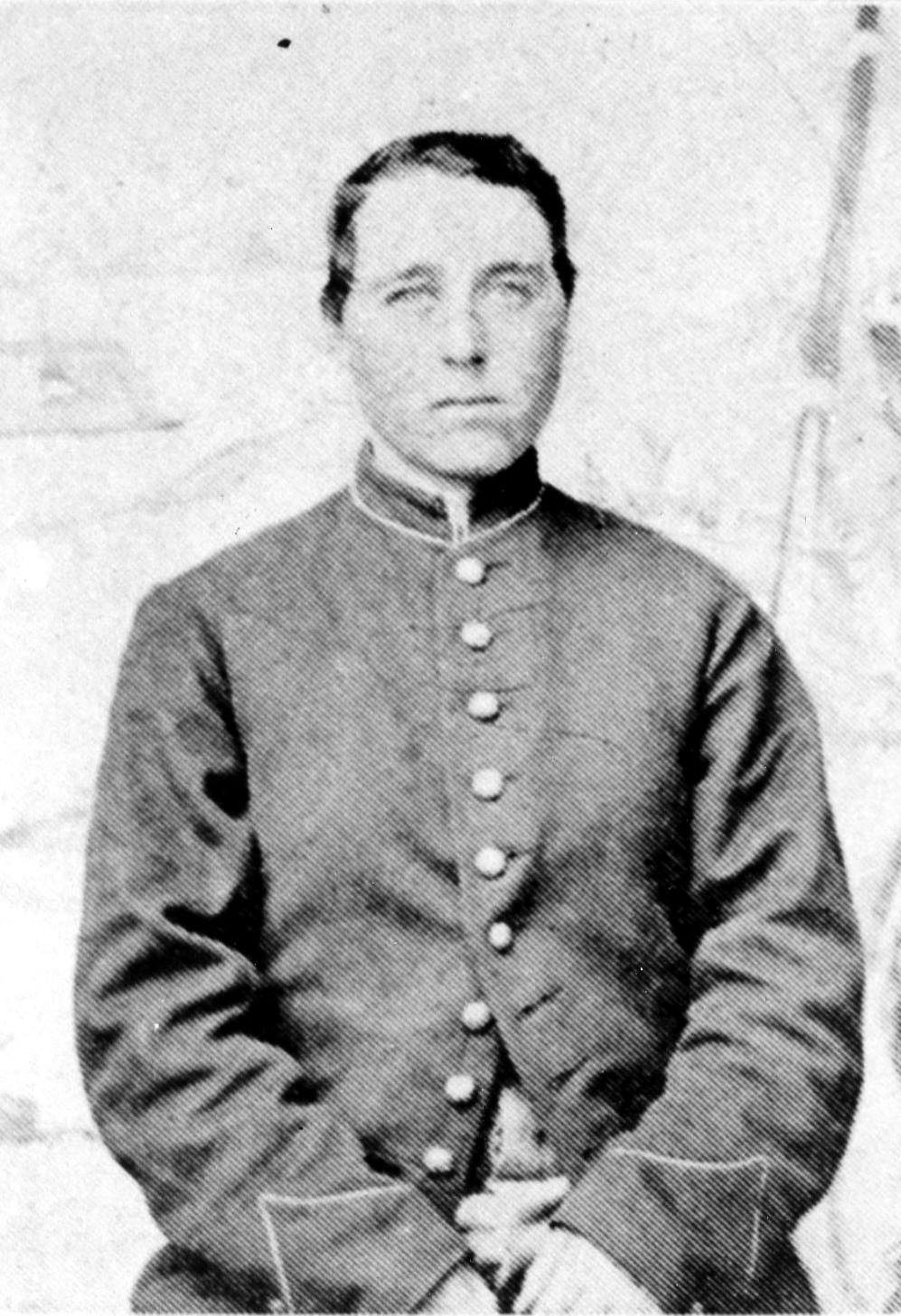 The other military branches took nearly as long to accept women in their ranks. The Navy in 1908 established the Nursing Corp with the first enlistments of women. In 1918, Opha Johnson became one of the first women to put on the uniform of the United States Marine. Twin Sisters Genevieve and Lucille Baker were the first women to join the Coast Guard during in 1917. Like the Army’s organizations in 1942 the Naval Women’s Reserve (known as the WAVES), was followed shortly by the Coast Guard Women’s Reserve (known as the SPARS).

Many of these women were relegated to nursing and clerical positions, with very little opportunity for actual combat experience. It wasn’t until World War II that larger numbers of women were sent into combat. In 1948, President Harry Truman signed the Women’s Armed Service Integration Act that allowed for a permanent presence of women in all of the military branches, a tradition that still holds strong. Today, the descendants of these early pioneers can look back to learn from their past experiences by striving for continued service to the United States for future generations.

Recently I shared a profile of my relative Russell Strauss, who served in the Navy during World War II. One of his two Sisters also served during the war. His younger sibling Kathryn Strauss served in the United States Army. 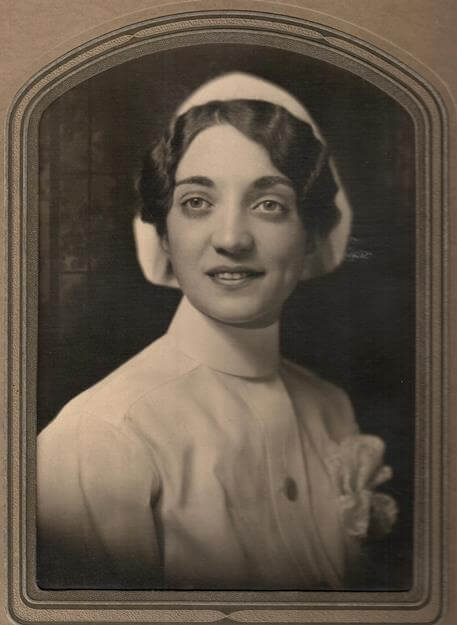 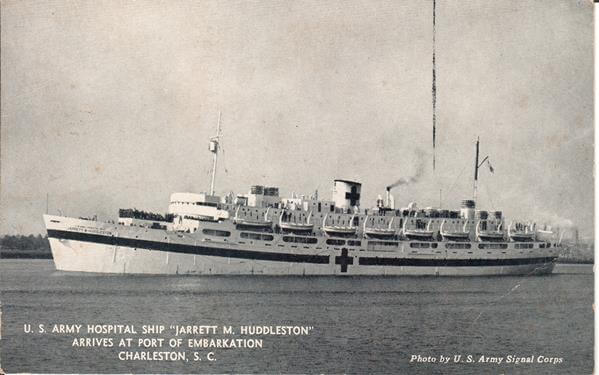 Kathryn graduated in 1930 from the University of Pennsylvania Nursing School at the age of twenty years old. She worked in the University Hospital in Philadelphia and later in the Public Health Department in Vineland, New Jersey until the start of World War II.

Kathryn joined the United States Army on September 15, 1943 at Fort Dix, New Jersey. She was commissioned a 1st Lieutenant in the Army Nursing Corps. Kathryn served both in the United States and overseas. From her enlistment date until September 2, 1944, she was stationed in New Jersey and New York. She served overseas stationed aboard the S.S. Jarrett Huddlston, a hospital ship on which she made 34 trips across the Atlantic Ocean.

Kathryn afterwards was sent back to the United States where she was discharged on November 13, 1945 in Brooklyn, New York. She returned to Pennsylvania, where she continued to work in the nursing field until her death on November 12, 1972 in Jonestown. The above photograph of her in uniform and postcard of her hospital ship were passed down to me through my relatives.

I located her application for compensation from the Commonwealth of Pennsylvania in 1950 on Ancestry.com. It gives details about her military service during World War II (see below). This personal story along with genealogy documents that I was able to locate shared how women in my family served alongside some of the men during war and how their place in history is reserved for honor. 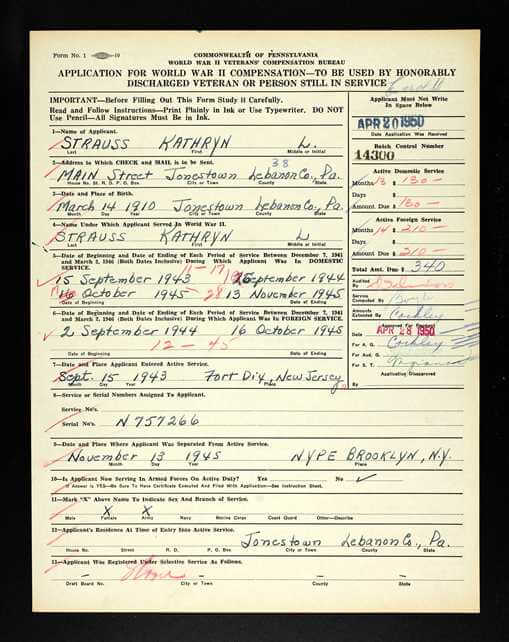 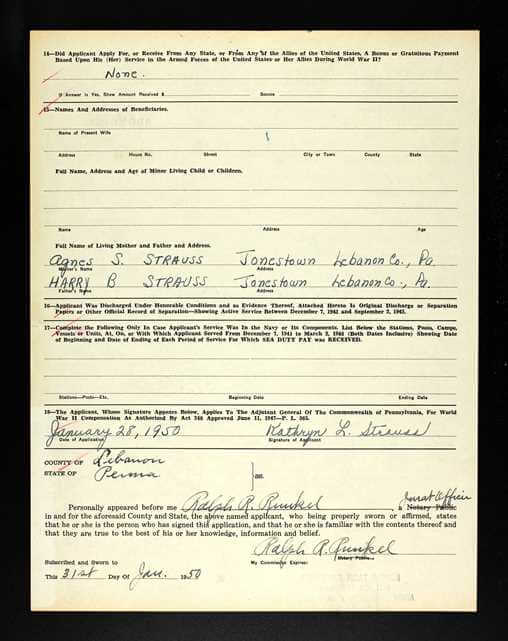 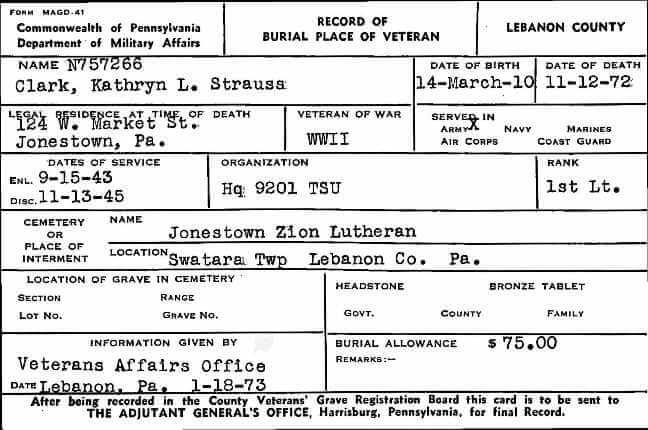 Keep watching this blog for an upcoming post about unique research resources for finding your female ancestors in U.S. military records. Meanwhile, here’s something fun to read: 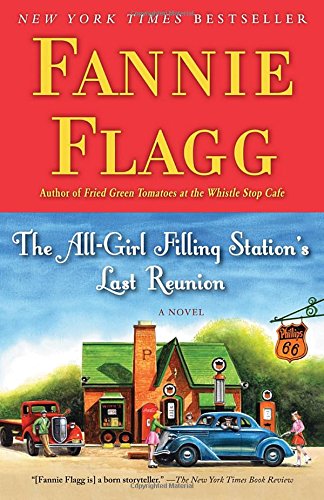