This Saint Patrick’s Day we’re highlighting new and updated genealogical collections for Ireland and Scotland! You’ll see new and updated records from Ancestry and Findmypast, with particular emphasis on newspaper additions including birth, marriage, and death notices. Plus Findmypast just released their new Irish newspaper archive of transcripts that were compiled by the celebrated Irish genealogist Rosemary ffolliott.

Genealogy giant subscription website Ancestry.com has a new collection of Cork, Ireland, Marriage Licence Bonds Index, 1623-1750. “The original rolls from which the printed index was created are held in the National Archives of Ireland (formerly the Public Record Office of Ireland). A Marriage Licence Bond was entered into before a Bishop, prior to the granting of the Marriage Licence, with the purpose of ensuring that the impending Marriage was legally sound. Two solvent individuals (one of which was usually the bridegroom) entered into the bond for a stated sum.”

From this collection, you might discover your ancestor’s name, their spouse’s name, and the year and place they were married. 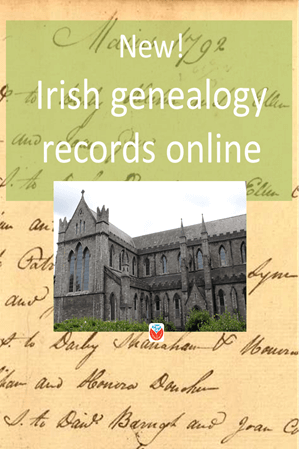 This is a fascinating database because it chronicles almost two centuries of Irish history, including the Great Famine, the country’s own political upheavals, and World War I, when the paper printed long lists of death notices after actions such as the famed Ulster Division’s attack during the Battle of the Somme. Genealogically significant items researchers may find in the News-Letter’s pages include, amongst others:

Findmypast just released the Irish Newspaper Transcript Archive, Ffolliott Collection 1756-1850! Search this collection of Irish newspaper transcripts that were compiled by the celebrated Irish genealogist Rosemary Ffolliott. Discover if your Irish ancestors had their birth, marriage or death announcement printed in a newspaper. Each record includes a transcript and original image.

Find your Scottish ancestors in Findmypast’s recent additions and updates to their genealogical records for Scotland.

Dundee & Forfarshire (Angus) Hearth Tax 1691 – Use this collection to find out the number of hearths in your ancestor’s home, which can provide you with clues about the family’s wealth and status. In 1690, Parliament granted a tax of 14 shillings on hearths including kilns. Heads of households, landowners, and tenants were liable for the tax, only hospitals and the poor living on charity from the parish were exempt from the tax.

Newspaper Death Reports – Uncover details surrounding your Scottish ancestor’s death amongst more than 72,000 death notices printed in Scottish newspapers between1807 and 1990. Discover more about your relative’s life, while searching these publications you may be able to find out the date of their death and the names of their parents or spouse.

Renfrewshire, Paisley Poll Tax 1695 – Search these Poll Tax records from 1695. Each record includes a transcript of the original record, the amount of information in each record varies, you may find a combination of your ancestor’s occupation and the name of their employer, spouse or parent.

About the Author: Lacey Cooke