ARIZONA BIRTHS. A new database of Arizona birth records at Ancestry covers 1835-1915. “When available, each record contains the full name of the individual, the full names of their parents, birth date, death date, county of birth, as well as an image of the original birth certificate.”

COLORADO DIVORCES. A new index to divorce records in Colorado (1851-1985) is available to Ancestry subscribers. “When available, each record contains the full names of both individuals, their date and location of divorce, as well as the certificate number.”

ILLINOIS MARRIAGES. A new index to Illinois marriages (1860-1920) is now searchable at Ancestry. It is still incomplete; records will continue to be added. Look for names of bride and groom, marriage date and place in these records indexed by the state genealogical society in partnership with the state archive.

KENTUCKY PENSIONS. More than 25,000 records have been indexed in a free FamilySearch collection of Confederate pension applications for Kentucky. The records were “filed by surviving former Confederate soldiers or their widows who lived in Kentucky” after the state legislature authorized the pensions, so they are dated relatively late: from 1912-1950.

NEW ZEALAND PROBATE. Nearly three-quarters of a million images have been added to a free FamilySearch collection of probate records from New Zealand. According to the description, “The records were created by various courts throughout New Zealand. Although the index will contain entries up through 1998 when all images have been captured, the images for probates issued during the past 50 years are unavailable for viewing.”

SCOTLAND VALUATION ROLLS. The 1855 valuation rolls for Scotland are now searchable at ScotlandPeople (you’ll have to register/login to search). According to the site, “The rolls contain the category and location or address of the property, the names of the owner, tenant and occupier, and details of the assessed rental value of all properties over the value of £4. Occupants of very humble dwellings may therefore not be included in the rolls.” THESE RECORDS ARE FREE TO SEARCH THROUGH OCTOBER 13 (click here).

U.S. WWII DRAFT REGISTRATIONS. Over a million indexed WWII draft registration cards from 1942 have been added to a free FamilySearch collection. Commonly known as the “old man’s draft,” these records pertain to men ages 45-62 who weren’t already in the military. A comparable collection is already searchable at Ancestry.

Thank you for sharing the news about these new genealogy records online with your friends and genealogy buddies. Just copy and paste the URL into an email or share it on your favorite social media platform. You’re a gem!

Here’s our weekly list of new genealogy records online. Do any collections below relate to your family history? Please share with your genealogy buddies or with societies that might be interested! New this week are records for free people of color in Louisiana, Alabamans in the Civil War, British POWs from WWII (and allies), and deaths in Pennsylvania.

AFRICAN AMERICANS IN LOUISIANA. Louisiana State University recently launched a free “comprehensive digital collection,” Free People of Color in Louisiana, about “people of African descent who…were born free or escaped the bonds of slavery before it was abolished in 1865.” Included are a “four-volume ‘Register of free persons of color entitled to remain in the state’ (1840-1864), four different collections of emancipation records, which often include testimony regarding why the enslaved person was deserving of freedom and provide other information about the enslaved person and slave owner, and an extensive collection of indenture records (1809-1843) in which at least one participant…was a free person of color.”

ALABAMA CIVIL WAR SOLDIERS. This new index at Ancestry comes from a card file kept for many years by the Alabama Department of Archives and History regarding every person they found who served in (or was exempted from) the military during the Civil War. According to the collection description, “You might find birth, death, and military information (which sometimes includes portions of letters written during or after the war, information on which battles the soldier was engaged in, wounds, imprisonment, and other items). There are some women (laundresses and other occupations) in this database as well.”

BRITISH-DUTCH-AMERICAN-AUSTRALIAN WWII PRISONERS OF WAR. Findmypast subscribers now have access to a million “records of some of the most infamous POW camps of World War II….The records cover the period 1939-1945 and contain the names, ranks and locations of Prisoners of War, along with the length of time spent in camps, the number of survivors, details of escapees and the nationalities of prisoners. Britons represent the largest number in the collection, followed by Dutch, Americans and Australians. In addition to this type of data, the collection comprises 360,000 images, including pages from personal diaries and photographs.” These can be searched amongst the larger collection of Findmypast POW records.

PENNSYLVANIA DEATHS. Ancestry’s collection of Pennsylvania death certificates has recently been updated with additional indexed images. It now spans 1906-1963. Interestingly, “Records of stillbirths were required to be filed as both a birth and death record, so you may find records of stillborn children in this collection.”

It’s nice to share! Thank you for sharing this post with others. Help us spread the news about new genealogy records online!

Do you ever get frustrated trying to track down vital and court records for your U.S. ancestors? Sure, most of these records (not all) were originally kept by county offices. But where are they today? Have they come online? What privacy policies block access? Where do you order originals of U.S. public records and how much does it cost?

You can dig through county government websites for answers (if they are there, and current) or printed guides to U.S. county offices (if they are current). But these paths don’t always quickly yield the answers you’re looking for.

I just learned about a FREE website that simplifies the search process: SearchSystems.net. (A hat-tip to Kim Komando for pointing this out to me!) Here, you can search by place or record type across the U.S. for birth records, court records, marriage and divorce records, and more.

I tried a sample search for divorce records in Ohio. Divorce records aren’t maintained with vital records: they are court records. They aren’t always easily accessible to genealogy researchers. Below is a screenshot of what SearchSystems.net says about Ohio divorce records (it’s cut off–there’s more!). How useful is THIS?!? Love it! Think about it: what kind of government record would YOU like to find for your U.S. ancestor? Click on the SearchSystems.net link above and give it a try! 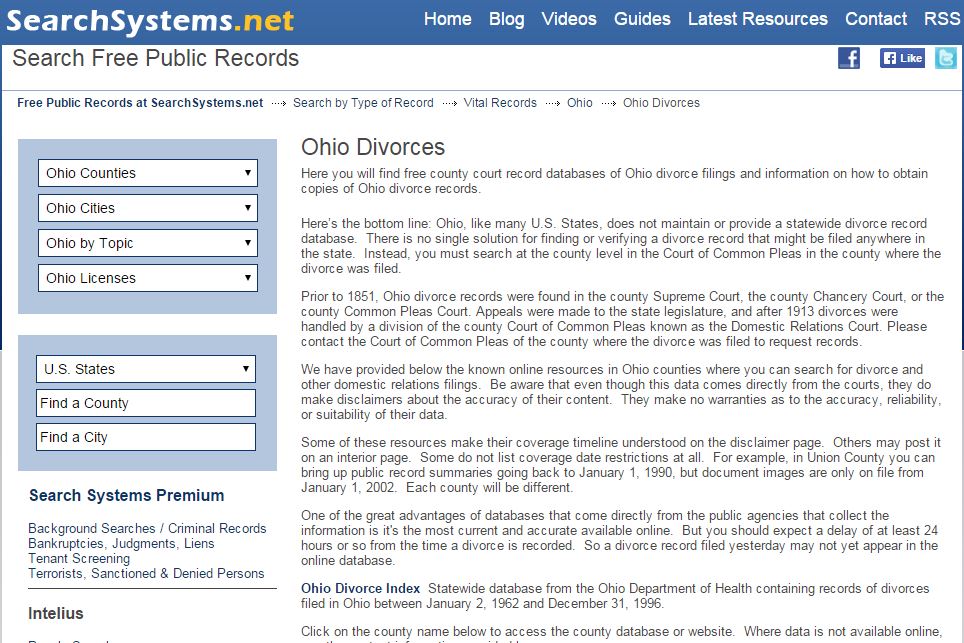 Nearly 12 million German genealogy records are newly searchable on Ancestry.com! You’ll find these in more than 30 databases of civil registrations of birth, marriages, residences and deaths between 1874-1950.

Here are some of the highlights:

Click here for a full description of these records, with direct links to each dataset. Happy hunting for your German roots!