Great news for those searching for ancestors in Canada and Mexico! FamilySearch has partnered with Library and Archives Canada (LAC) to publish the 1926 Census of Prairie Provinces, available to search for free online now. Also new this week are massive updates to Ancestry’s genealogical records collections for Mexico, including vital records and Catholic church records.

Genealogy Giant FamilySearch has recently announced the online launch of the Historical Canada 1926 Census of the Prairie Provinces. From the press release:

“FamilySearch International and Library and Archives Canada (LAC) have partnered to publish online the 1926 Canadian census of the Prairie provinces. The free database provides a searchable index of 2 million names linked to 45,000 digital pages of the historical regional Canadian census. Search the census now at FamilySearch.org.

LAC provided the digitized images, and FamilySearch created the index. People with Canadian roots can now easily find information about their ancestors who might have lived in the provinces of Manitoba (639,056), Saskatchewan, (820,738) and Alberta (607,599). 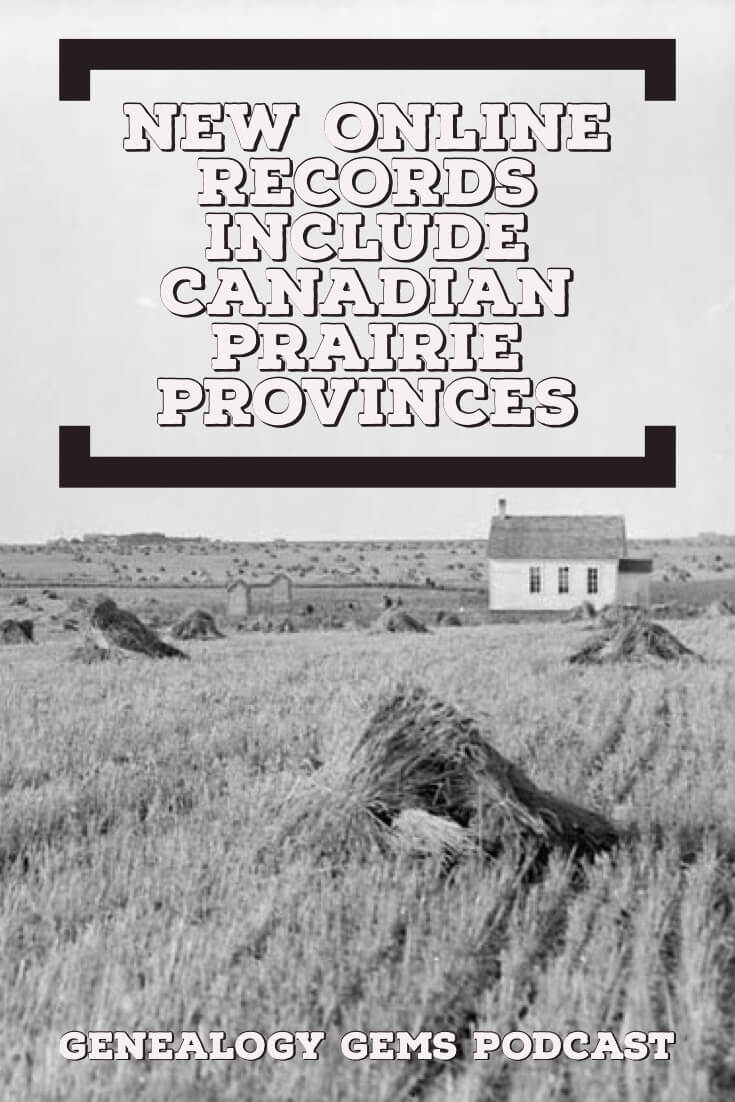 About the 1926 Census of the Prairie Provinces
Since 1871, a Canada-wide census has been held every 10 years. However, during the early part of the 20th century, the population of the Prairie provinces expanded rapidly, so there was a need for more frequent population counts in those provinces. It was decided to conduct a census of Manitoba, Saskatchewan, and Alberta in June 1906 (between the Canada-wide censuses), and every 10 years thereafter.”

My Great Great Grandfather Found in Saskatchewan!
We’ve long known that my great great grandfather Harry Cooke immigrated to Canada in 1912, however the trail grows cold quickly from that point. This new collection offered a new chance to track him down in North America. A quick search of this new online database delivered the goods!

Stay tuned to the Genealogy Gems Podcast to hear how to get even more out of the data included in this fabulous collection!

Ancestry.com has made massive updates to their genealogical records collections for Mexico, listed here by location:

More on researching your Hispanic ancestors

If you have Hispanic heritage — anywhere from Mexico to Chile to Spain — you’re in luck: More resources for tracing their immigration are available more readily than ever before. In this special research collection from Family Tree Magazine, get eight resources to trace your Hispanic heritage for one low price! You will learn important historical dates and timelines, Spanish naming traditions, where to find records of immigration by ship, plane and train, and much more! Get the Hispanic Heritage Research Collection for just $24.99 – a $70.96 value! 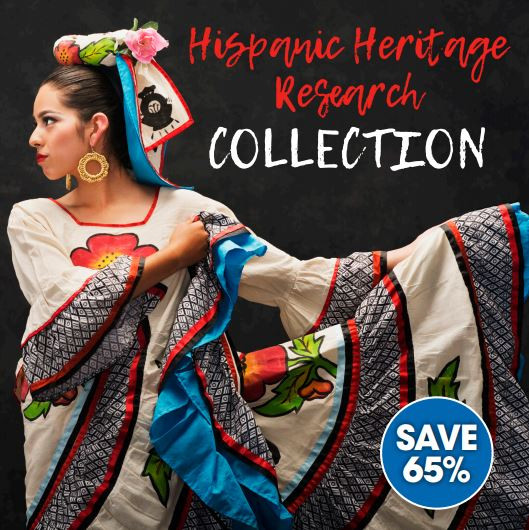 Find your Abuela (the Spanish word for Grandma) in a wide variety of Catholic Church records for Mexican genealogy at FamilySearch. Also in new and updated genealogical records, collections from Norfolk, England; Victoria, Australia; and Quebec, Canada. 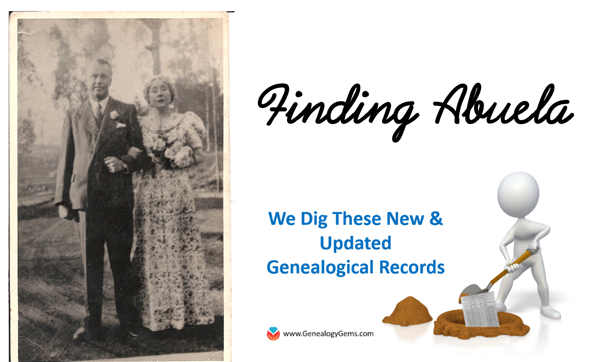 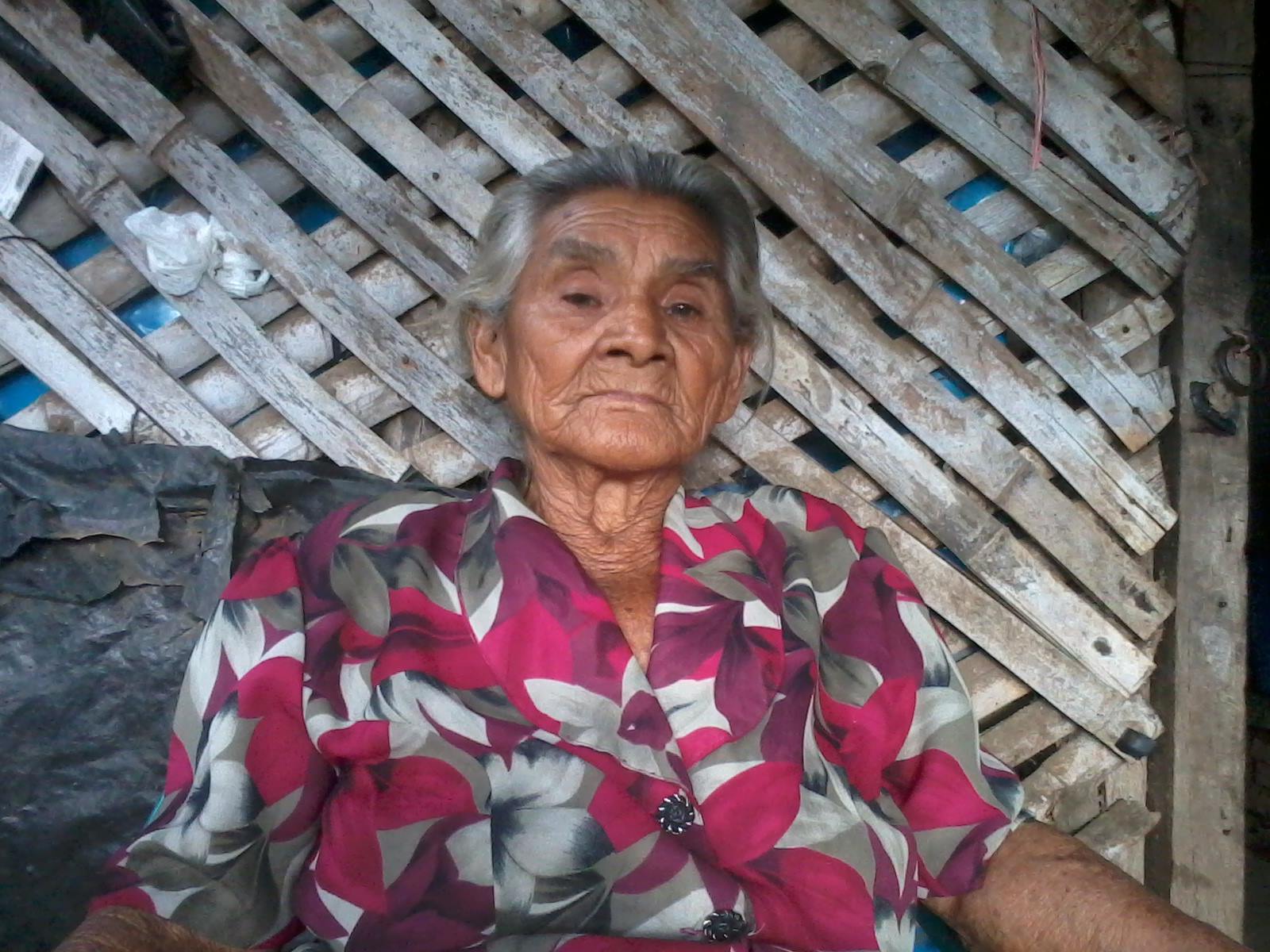 Abuela Francisca Ramos. Photo used with permission from the family.

FamilySearch has updated and added thousands of new Catholic church records in their Mexican genealogy databases. These church records cover many areas of Mexico, but in particular, the Hidalgo, Puebla, Jalisco, and Guanajuato databases have all reached over 1 million records. The years covered will vary, but the earliest records are from the 1500s and as recent as the 1970s.

These Catholic church records include baptismal records, marriage records, deaths, and other miscellaneous records that may contain valuable genealogical data for your ancestors. Check out the following databases for Mexican genealogy below:

Several collections for Norfolk, England have been updated at Findmypast this week. Among them are first, Norfolk Bishop’s Transcripts Baptisms 1685-1941. Norfolk Bishop’s transcripts for baptisms contain over 647,000 records. Each entry includes an image of the original document and a transcript of the vital details. The amount of information found in the transcript will depend on the age and condition of the original document. Most will include a name, baptism year, baptism place, and the names of parent’s. Images may reveal additional information such as your ancestor’s birth date, father’s occupation, and the name of the officiating minister.

The second database is titled, Norfolk Bishop’s Transcripts Marriages 1685-1941 and contains over 157,000 records. Each record includes a transcript and may include the birth year, date of marriage, place of marriage, and the name of their spouse as well as an image of the original document.

Thirdly, the Norfolk Bishop’s Transcripts Burials 1685-1941 collection will allow you to search over 434,000 Bishop’s transcripts of Norfolk burials to discover your ancestor’s final resting place. Transcripts will also reveal when they died and their age at death. Images of original documents may reveal additional information such as the name of the minister who performed the ceremony, your ancestor’s date of death and, occasionally, their cause of death.

Finally, the Norfolk Electoral Registers 1832-1915 containing over 4.5 million records may be just want you are looking for. Electoral registers were first created in 1832. Every year, a new electoral register was created to list the name of every individual eligible to vote. Voting was closely linked to the possession of property; therefore, the registers described the type of property owned or rented by the individual.

Electoral registers are an invaluable resource to trace your ancestors between the census years. Each entry in the Norfolk Electoral Registers 1832-1915 will include an image of the original register and a transcript of the facts listed. Transcripts will list your ancestor’s name, the place they registered, the district and the year they were registered. Images will provide additional information such as you’re their address and the type of property they owned or rented.

Also at Findmypast, over 104,000 records have been added to the Victoria Births collection. These civil registration records may reveal your ancestors birth place, birth year, parent’s names and registration number. The entire collection now contains over 1.9 million records spanning the years 1837 t0 1917.

Over 1.6 million articles and 13 brand new titles have been added to Findmypast’s collection of historic British Newspapers. The new additions cover the North West and South East of England, a number of Scottish counties, Nottinghamshire, and Bournemouth. The new Scottish titles include the Haddingtonshire Courier, Linlithgowshire Gazette, Ross-shire Journal, Rothesay Chronicle, Kinross-shire Advertiser, Peeblesshire Advertiser, and the Scottish Referee.

The Drouin Institute has been in the genealogy business for over a hundred years. The Drouin Collection, which is available on Ancestry as well as on GenealogyQuebec.com, was microfilmed in the 1940s and digitized in the 2000s by the Institute. The Drouin Collection contains the civil copy of all parish registers (baptism, marriage, and burial records) from Quebec from 1621 to the 1940s. It is just one of many of the collections you will find from the Drouin Institute. 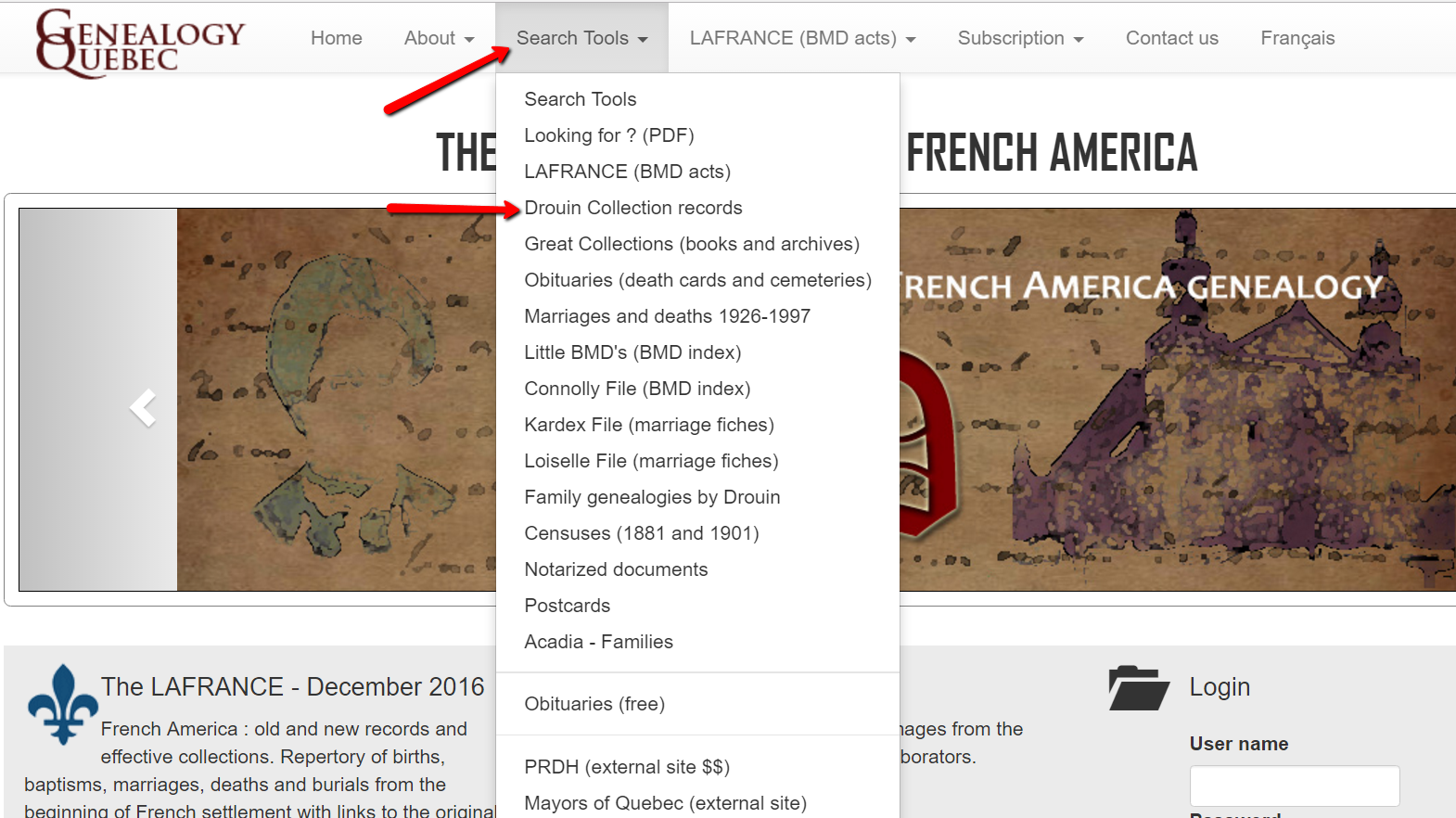 In total, GenealogyQuebec.com offers many databases to research and reaches near 43 million images and files.

To access the Drouin Institute record collections, you will need to visit GenealogyQuebec.com. It is subscription based website. Subscription information can be viewed here.

LAFRANCE
The LAFRANCE is the most popular and comprehensive tool available at GenealogyQuebec.com. It is a very detailed, high quality index of the Drouin Collection, and also provides the original document. Here is an example of what the LAFRANCE looks like from our users’ perspective: 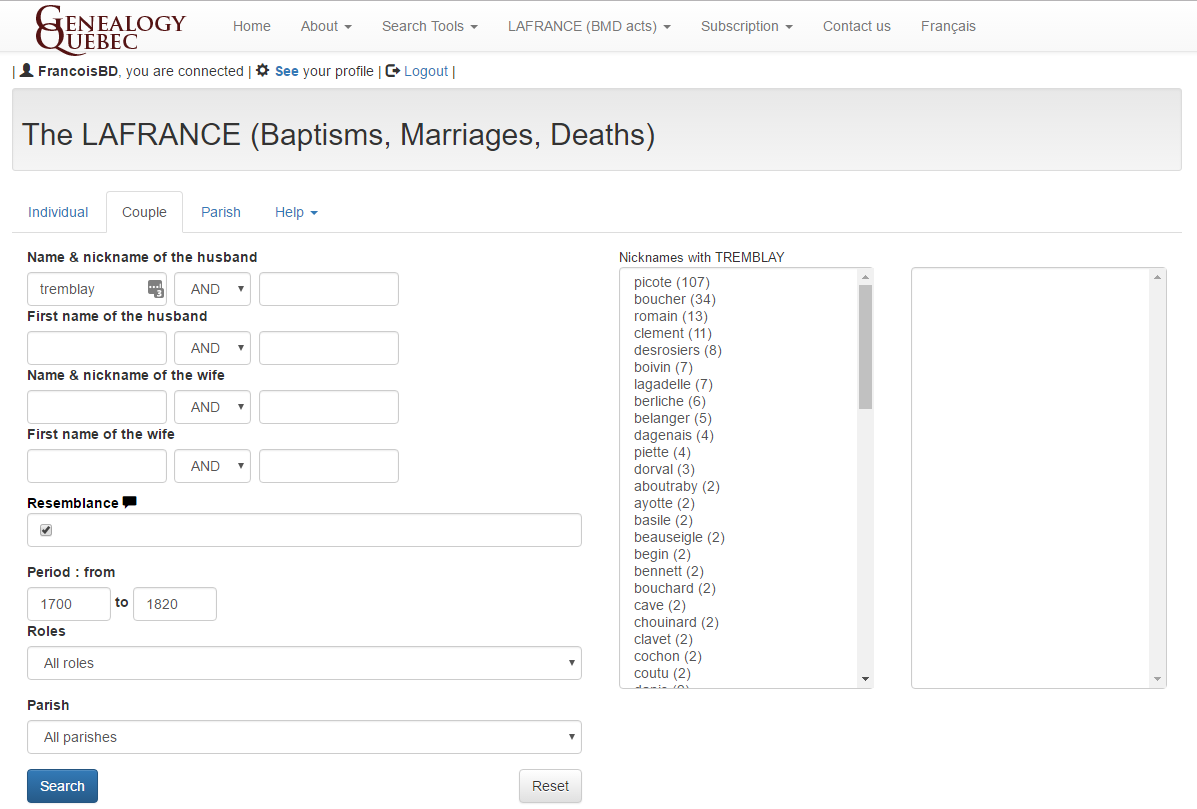 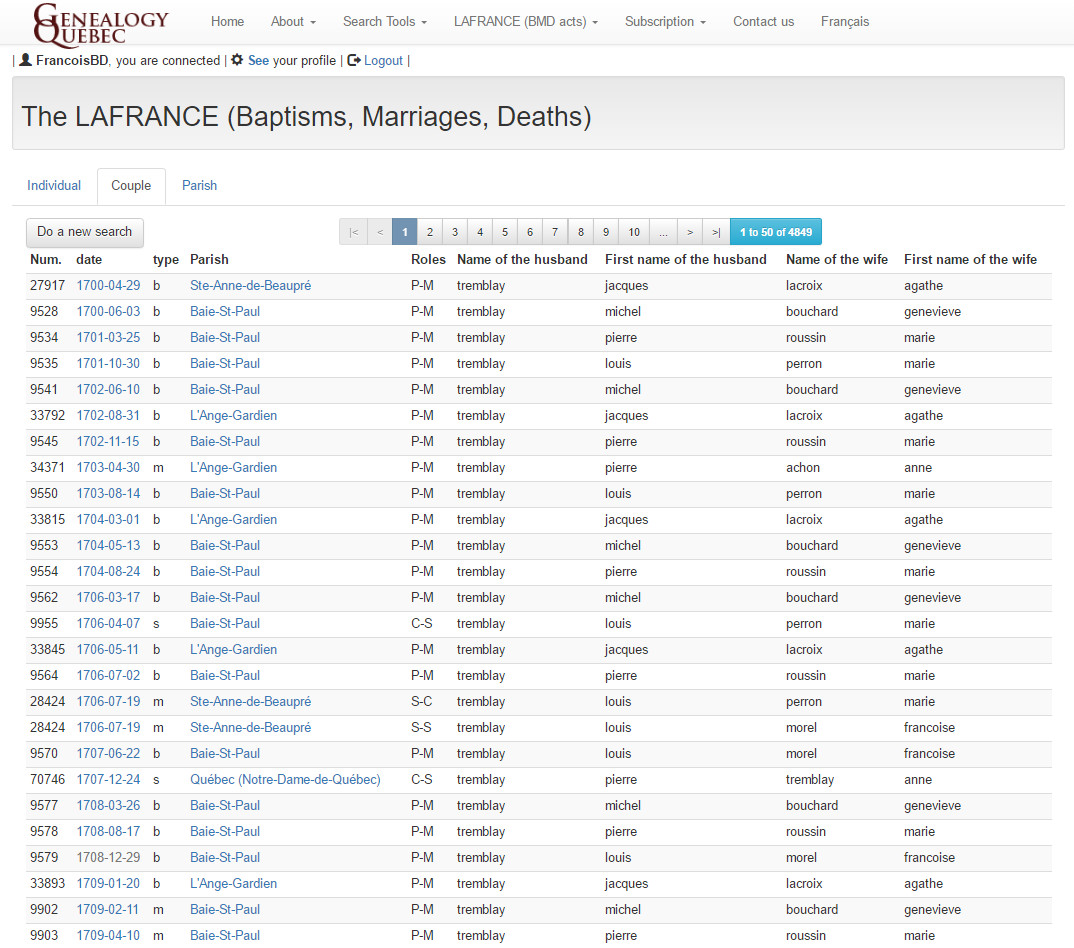 The LAFRANCE’s index is particularly valuable and appreciated by English speakers, as it negates the need to read and understand French in order to obtain all the relevant information from a record.

The Library of Congress has launched a comprehensive portal to its extensive WWI holdings. This one-stop portal is designed to help you search WWI subject material with ease. Search things like propaganda posters, letters, diaries, newspapers, and more. It is a wonderful site for not only the genealogist, but the avid historian as well.

The Mexican Genealogy Guide by David A. Fryxell from Family Tree Magazine will help you discover the bounty of records in Mexico. This digital download will help you understand naming practices, pinpoint ancestral whereabouts, and how to best navigate church records there.

MEXICO CHURCH RECORDS. FamilySearch also just updated their Mexican church records by the millions, from Aguascalientes to Zacatecas. The biggest updates are for the Distrito Federal (Mexico City) and Pueblas. Search these here for free.

SOUTH DAKOTA SCHOOL RECORDS. Nearly 3 million indexed names have been added to this free collection at FamilySearch. According to the database description, “School records, including teacher’s term reports, school census and attendance records located at the South Dakota State Historical Society in Pierre. Records are generally arranged by county, year and school district number.” It looks like this is a work-in-progress and more indexed records will be added.

US ALIEN CASE FILES. Nearly half a million In 1940, immigrants in the U.S. who had not naturalized had to register and be finger printed. Case files resulted! Nearly a half million indexed records from all over the U.S. are part of this new FamilySearch collection. (Residents of Guam; Honolulu, Hawaii; Reno, Nevada; and San Francisco, California are not part of this collection.)

US CENSUS RECORDS. Updates, corrections and additions to their U.S. federal census collections have been posted recently by both FamilySearch (1790 and 1800) and Ancestry (1880 and 1920 as well as the 1850-1885 mortality schedules). No additional detail was provided about specific changes to the collections. We blogged a few months ago about why FamilySearch was re-indexing part of the 1910 census; read it here.

Sign up for our weekly newsletter, and this weekly round-up of major new record collections will be among the “gems” you find in it! With your sign-up, you’ll receive a free e-book on Google search strategies for genealogy. Simply enter your email address in the box in the upper right-hand corner of this page. Thank you for sharing this post with anyone else who will want to know about these records (and this weekly blog post.)