We all have cookbooks in our kitchen, many of which were handed down to us by our mothers and grandmothers. In addition to be overflowing with delectable recipes, they are often brimming with family history. Today I’d like to share with you a recipe mystery that followed me for years, and the bit of genealogical serendipity that solved it. 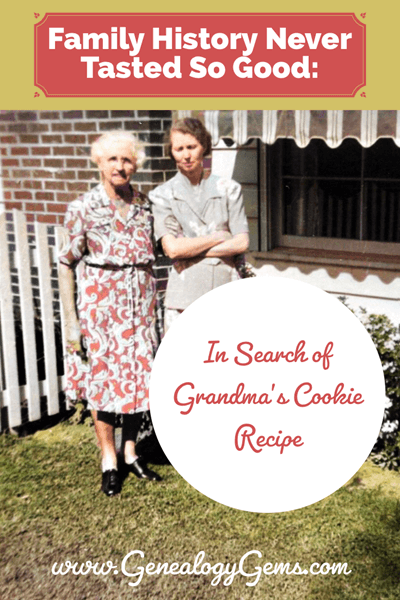 I once gave a presentation called Inspiring Ways to Capture the Interest of the Non-Genealogists in Your Family at a local genealogical society. (Genealogy Gems Premium Members can log in and watch this vide class as part of their membership here.)

In it, I gave an example of some items I had found on Ebay from my husband’s Larson family. If you listen to the Genealogy Gems Podcast then you have heard me mention the Larson family. They hailed from Winthrop Minnesota and owned a hardware store and lumber business there for many years.

While I was taking questions toward the end of the presentation a woman in the front raised her hand. Her name was Harriet, and she said she was sure that she had a cookbook from Winthrop, Minnesota in her collection of books at home. She offered to send it to me and I gladly gave her my email address so we could connect.

Considering that Winthrop is such a small town, it make her statement surprising indeed! To provide perspective: Winthrop is about 1 square mile and the population hovers somewhere around 1300. So, I was surprised indeed to have someone in Pleasanton, California telling me that she had a cookbook that dated back to the early 20th century from this little town.

As promised, Harriett followed up with me by email. She asked for my address and told me that the book “looks a little worn but all of the pages are there. I hope it can be of some use to you. My sister taught either first grade or kindergarten there during World War 2 and that’s how it came in to her possession.”

The Cookbook Filled with Family History

Harriett was a woman of her word because about a week later the 340 Home Tested Recipes cookbook compiled by members of The Ladies Aid of the First Lutheran Church of Winthrop, Minnesota was in my mailbox. 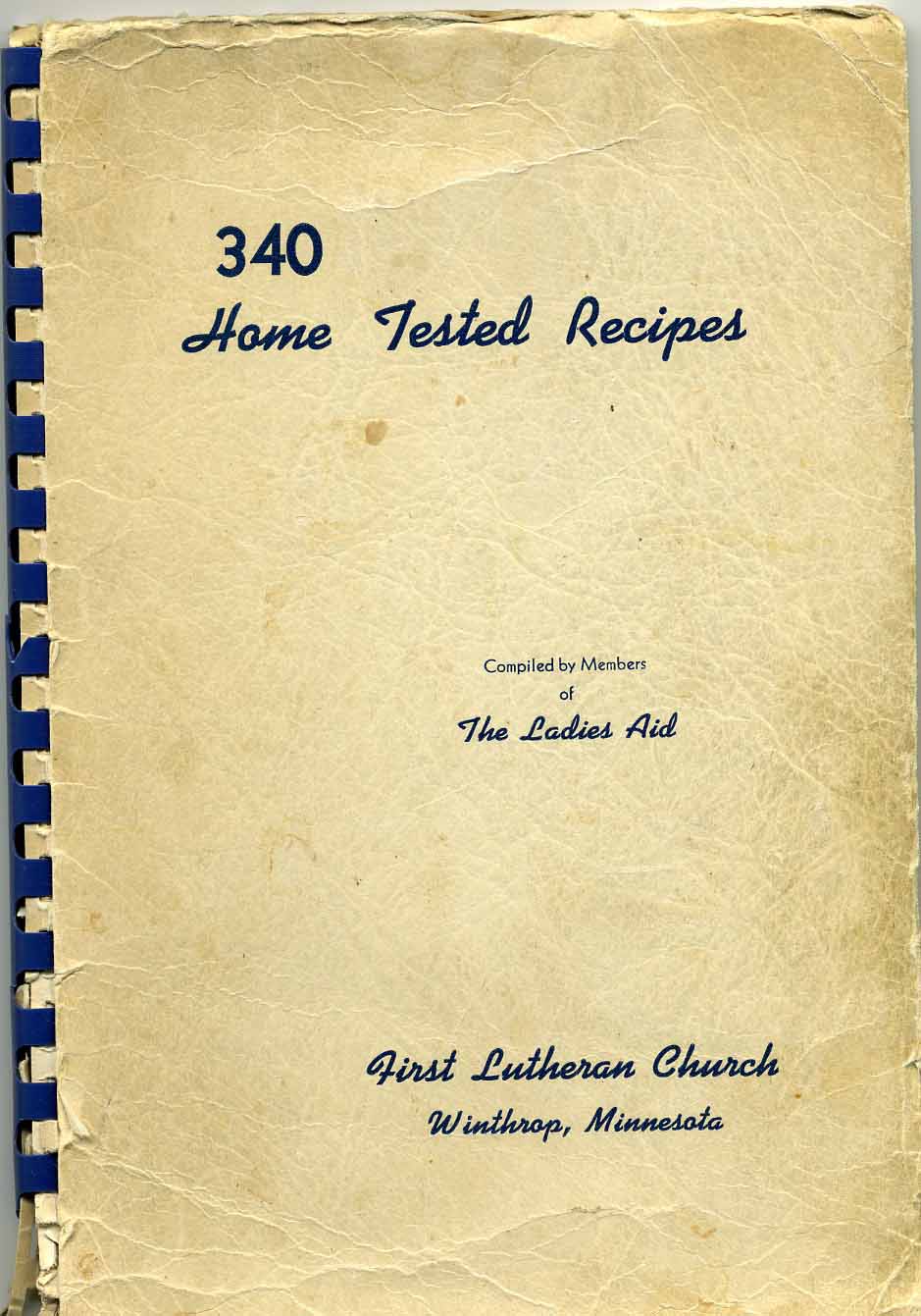 It continues to amaze and delight me how powerful just putting your family history “out there” is. By regularly mentioning real people and places in your own research, it so often leads to information and items that just seem to be waiting to be found. It’s what we call “genealogical serendipity” in genealogy circles.

But the genealogical serendipity didn’t end there. Not only did my husband’s ancestors contribute recipes to this little community cookbook, which of course I was thrilled to find – but there was a recipe in there that I had been in search of for over 25 years.

You see, when Bill and I got married, he shared his fond memories of a sour cream cookie his grandmother used to make. I’m an avid baker, so I checked with his mom to see if she had the recipe. Sadly, she didn’t.

Over the years I have tried to find a recipe for sour cream cookies in an attempt to recreate them. Every time I found one, I whipped up a batch. Bill would take a bite and shake his head saying they’ were good, but they weren’t like grandma’s cookies. 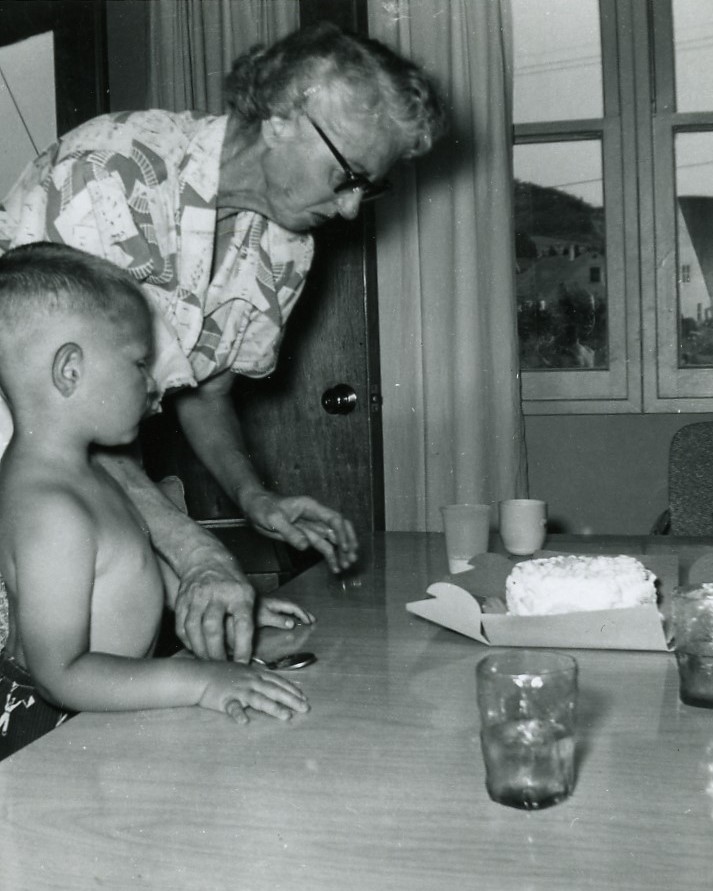 So as you can imagine, the first thing I looked for when I received this cookbook from the town where Bill’s grandma was born, was a recipe for sour cream cookies. There were many yummy-sounding treats to comb through like Pecan Sticks, Victoria Cookies, Father and Son Favorite Cookies, and Sorghum Cookies.

I got excited as I came across names I recognized from the family tree including Mrs. Sheldon S. Larson, the mother of a cousin we had the good fortune to finally meet two years ago when I presented a genealogy seminar in Minnesota at the Swedish Genealogical Society.

But the real thrill came when I made my way to page 42. There I found a recipe for Sour Cream Drop Cookies: 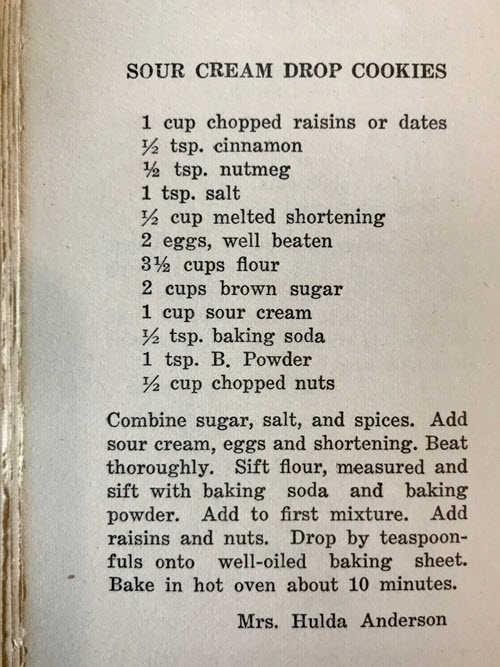 Surprisingly, the recipe wasn’t contributed by Bill’s grandma Helen (Larson) Mansfield or anyone named Larson. Instead it was submitted for inclusion in the cookbook by Mrs. Hulda Anderson. That fact didn’t deter me from trying it out. In a small town like Winthrop, recipes likely were regularly swapped and handed down through various families.

I immediately baked a batch and served them up to Bill. I’ll never forget his eyes as they lit up in excitement! He took a bite, and was ecstatic to once again be tasting Grandma’s sour cream cookies!

It may sound like a small victory in the scheme of thing, but for me it was a thrilling one, none the less!

I emailed Harriet and told her the good news and thanked her profusely.

I got a reply from her husband George. He wrote:

“I thought I would add a little amusement to the coincidence of the Sour Cream cookies. My father, George Anderson, Sr., was a salesman for American Steel and Wire, subsidiary of U. S. Steel, from the 1920s to the 1960s, traveling to every hardware store and lumber yard in southern Minnesota to sell fence, posts, nails etc. I don’t have any record of it, but I’m sure he would have called on your family’s hardware store in Winthrop. He knew all of his customers by first name, no doubt your in-laws included.”

A Genealogical Look at the Cookbook

I looked through the book carefully for a publishing date but none was to be found. However, there were several clues including the name of the church and the pastors name: 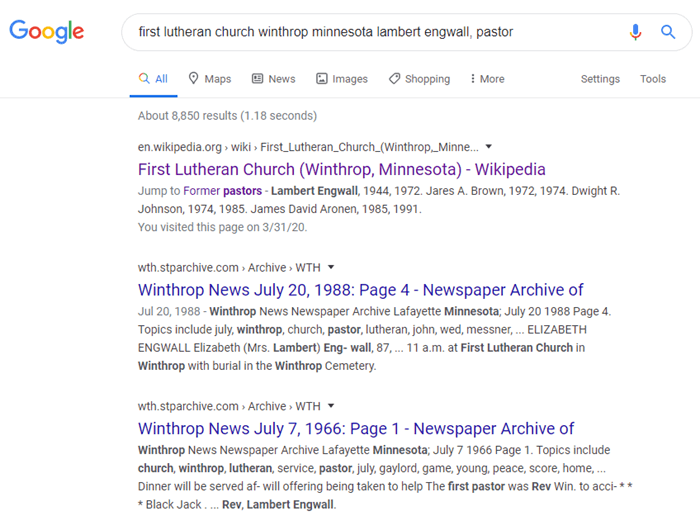 Googling the church, location and pastor

The first result was just what I needed. The link to me to a Wikipedia page about the church:

The church in Wikipedia

It was a fairly comprehensive page, and I was specifically looking for a list of pastors who had served at the church. To save time, I used Control + F (PC) to trigger a find on page search bar. I searched for “pastor” and was immediately take much further down the page to exactly what I wanted to know. 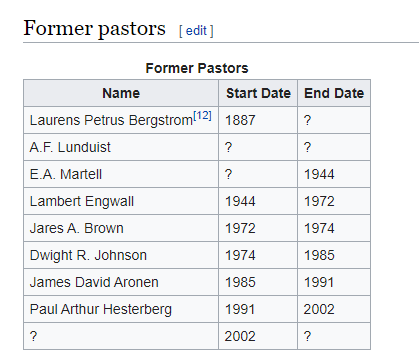 I quickly learned that Lambert Engwall served at this church in Winthrop, Minnesota from 1944 to 1972. Given that Harriett through it hailed from the World War II era when her sister lived there, and from the condition and style of the book, I feel confident it was published closer to 1944.

The next steps to learn more about the relationship between the Andersons and Larson include could include:

Have you experienced glorious instances of genealogical serendipity in your own family history quest? Do you have a cookbook that has been handed down to you that you treasure? Please leave a comment below and share your story!