Read this genealogy mystery from a Canadian family with French and Irish roots. You’ll see the value of considering varied surname spellings, watching for other relatives in census records, using church records, and compiling clues from several sources to get a better picture of the past.

Thanks to Carolyn Tolman, Project Manager at Legacy Tree Genealogists, for this guest post. 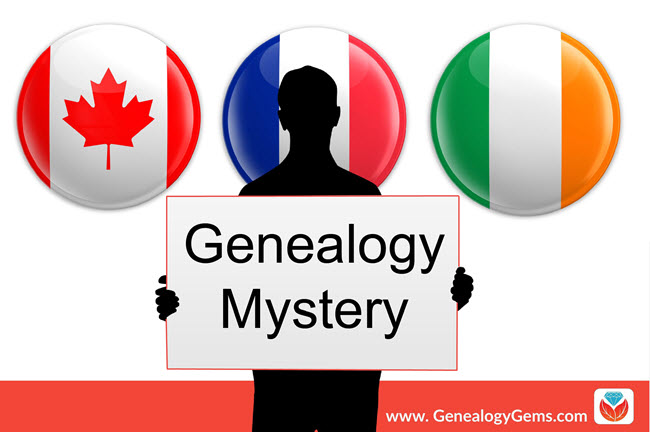 Recently we were contacted by a client who requested we begin researching her direct paternal ancestor. This ancestor was named John Lucy, of Ontario, Canada, and was of alleged Irish heritage.

Our client explained that her father had recently died and that he would have loved to know the history of his name. She had been trying to trace the Lucy line herself and was not having success.

Though she wished she had begun the research before he passed, she felt this was a way for her to honor her father’s life. She was also planning a trip to Ireland soon and hoped to visit her ancestral towns.

She said “I would be so happy to just make the first connection back to the UK. That is what my father always wanted to know.”

Unraveling a genealogy mystery: Methodist or Catholic? Irish or French?

A survey of Canadian censuses between 1871 and 1901 established that John Lucy was born in Cumberland, Ontario in the early 1840s, and was Wesleyan Methodist by way of religion. However, neither John Lucy nor any of his children appeared in the Wesleyan Methodist baptism records in the Cumberland area. At this point, research temporarily halted as we had reached the end of a project.

In the meantime, the client located a Wesleyan Methodist marriage index entry for a John Lussiers and Ann Hannah who married in Cumberland on 22 August 1864, and she requested that we recommence researching the Lucy family.

In the marriage record, John was reportedly born in Cumberland and was the son of “E[xe]brus and Delia Lussiers.” The name “E[xe]brus” was obviously a poor transcription of an unknown name, as we knew these marriage registers were the result of several subsequent handwritten copies.

An immediate concern with correlating John Lucy and John Lussiers was the apparent French spelling of his surname. We knew from previous research that John Lucy’s ethnicity was consistently identified as Irish after 1871. However, learning this new possible spelling and ethnicity led us to recognize John in the 1861 census:

Fourteen-year-old John Lucier lived in the R.P. Lindsay household.[1] They lived in Cumberland – the same place John Lussiers listed in his marriage record.

We were surprised to see that John Lucier was identified as Roman Catholic, unlikely for someone who would only three years later be married in a Wesleyan Methodist Church.

Upon closer inspection, we developed a hypothesis that would explain the apparent conflict. John was listed as one of three non-family members in the household of a Church of Scotland minister. This young boy may have been taken in by Rev. Lindsay when his parents died or were otherwise unable to care for him.

So, although John Lucier was a baptized Roman Catholic, he was living in a house where everyone else was a member of the Church of Scotland. He would have become familiar with and was probably following the Presbyterian tradition.

John may have had mixed ancestry, with his father having been French and his mother Irish. He may have then chosen to more closely identify with his Irish roots, particularly since his wife was Irish.

To test this hypothesis, we turned to John Lucy’s children and found that they indeed frequently identified themselves as having French lineage. By analyzing the later records concerning two of John Lucy’s children, we gathered evidence that the family likely had both French and Irish heritage. This supported our hypothesis that John Lucy was also known as John Lussiers and that he married Ann Hannah in 1864.

The next chapter in this genealogy mystery: Finding John’s mother in the census

A search for John Lucy/Lussiers in the 1851 census did not yield any positive results, most likely because the surviving 1851 census is not complete, so we returned to the 1861 census for more clues.

Interestingly, there were two Lucier families in 1861 in Cumberland. The families of Frances Lucier and Baptist Lucier appear next to each other in the census. Of note, Frances Lucier’s wife was named Adelaide and they had a daughter, Delia.[2] The similarity of Adelaide to John’s mother’s name – Delia – was compelling.

Moving to French Catholic parish records, we discovered the baptismal record for a John Lucier, son of Francis Lucier and Adelaide Dirmont/Diamond, born in Cumberland on 30 August 1844 and baptized on 12 November 1844 at the parish St. Gregoire-de-Nazianze in Buckingham, which is just across the river from Cumberland.[3]

The Catholic Church records of Quebec and some areas of Ontario are a fantastic collection. The French-Canadian church records served as civil registration records until the beginning of the twentieth century. Copies of all the church records were thus sent annually to the appropriate courthouse.

In the 1940s, L’Institut Généalogique Drouin (The Drouin Genealogical Institute) microfilmed these records at courthouses across Quebec and in other areas with high French-Canadian populations. [Click here for an update on the Drouin Collection online, and click here for an article on Catholic church records in Quebec.]

In addition to this Drouin collection, an extensive, seven-volume genealogical reference was developed by Father Cyprien Tanguay in the late nineteenth century. The Genealogical Dictionary of Canadian Families from the Foundation of the Colony to the Present Day, also known as the Tanguay Collection, is considered one of the most comprehensive resources for French-Canadian genealogy. [Ancestry.com has indexed images of this collection.]

Our client was thrilled. Of her father, she said, “I know he would be ecstatic.” She continued, “I am so impressed with the level of work that you have done. That cannot have been easy at all but it looks like we made a breakthrough this time. That is so exciting.”

There is nothing more satisfying than breaking through genealogical brick walls and helping our clients realize their heritage, perhaps especially when it is different than the family always believed. Our client may not be able to visit the Lucy ancestral village in Ireland this summer, but they may now be considering adding a stop in Paris!

Need help with your genealogy mystery?

If you’ve hit a brick wall in your research and you’re ready for professional research help, we’re proud to recommend Legacy Tree Genealogists! Their team of experts are hand-picked, tested and trained on how to find the unfindable.

They are based near the world’s largest family history library and also work with researchers around the globe. They are experts at everything from tracking down rare international records to analyzing DNA test results. Click here to learn more and set up a free consultation. Exclusive Offer: Save $100 on select genealogy research projects with code GGP100.