NEW! Updated Tips for Using Your iPad for Genealogy 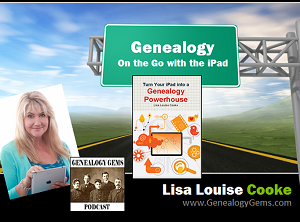 Are you using your iPad for genealogy? Or a tablet computer? You should! There are SO many family history-friendly apps out there! And the list of what you can do with your iPad or tablet just keeps getting longer.

That’s why I’ve updated my Premium Video, “Genealogy on the Go with iPad.” The iPad is built for hitting the road and is ideally suited for family history due to its sleek lightweight size, gorgeous graphics and myriad of apps and tools.

In this class I teach you “the tablet mindset,” the best apps for the tasks that genealogists want to accomplish, and my updated Top 10 list of iPad Tips and Tricks. By the end of class you will be able to turn your iPad into a family history powerhouse!

If you’d rather read a book on this topic, check out one of my best-selling books, Turn Your iPad into a Genealogy Powerhouse.

Search for more posts on apps, iPad, mobile genealogy and related topics on my home page. Just search by topic in the lower left corner!

Among these millions of records are “major collections of births, marriages and deaths covering America, Australia, and Ireland,” according to a FamilySearch.org press release. Millions more records from about 600 additional collections are yet to be added. findmypast hopes these records will help current subscribers and allow the company to expand to non-English-speaking markets.

The FamilySearch press releases describes the overall purpose of the collaboration as delivering “a wide range of projects including digital preservation, records search, technological development and the means to allow family historians to share their discoveries.”