California in the 1940 Census

Archives.com and other community project partners recently announced the release of the California 1940 census index, and have provided a neat infographic highlighting California in 1940.

I was particularly thrilled to see the searchable California index released because my parents and all my grandparents were in the state , working farms and just a year away from going to war and building ships for the cause.

Old maps can tell us a lot more than just where our ancestors lived: They put events into geographic context, reveal surprising genealogical clues, and can be incorporated into Google Earth for analysis and storytelling.

It used to be pretty difficult to find old maps to use in your family history research, but it is a lot easier these days. Libraries and archives are digitizing them and putting them online.  And in the newest episode (#92) of the Genealogy Gems Premium Podcast I’ll tell you about a terrific example of a website that has set the goal of have every image they possess (allowable by copyright) digitized and on their  website by early 2013

Also in this episode I’m going to tell you about something pretty shocking that happened to me recently while speaking at an international genealogy conference. I was really taken by surprise, and received some unexpected questions. I will share those with you as well as some solid answers.

It’s another packed episode. If you are a member sign in now to start listening.

Not a Genealogy Gems Premium Member yet?

There’s never been a better time to join!  You will get access to videos of my most popular classes, and as of today 92 Premium episodes providing hours of genealogical education and fun. 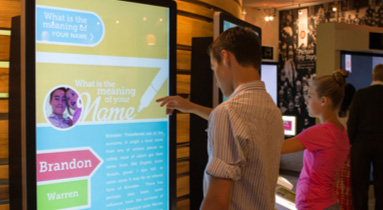 Wouldn’t it be great if you could bring your loved ones to a state-of-the art, museum-quality interactive exhibit that introduces them to their own family history?

Now you can! A “prototype” FamilySearch Discovery Center was unveiled yesterday in downtown Salt Lake City in conjunction with RootsTech 2015. Visitors are handed a tablet computer and sent around to seven stations. At each they dock their tablet, which has their FamilySearch login programmed, and experience different aspects of history with their own family history data.

You can see your family’s international migration through the generations; superimpose yourself in historical costumes from several nations; check out the history and popularity of your first and last names; and enter a “time machine” with 3D historical re-creations of ancestral kitchens throughout the years. One of my favorite stations was one I almost skipped: the personal history interview in a private booth. You choose your life season, from child to senior, and a virtual interviewer appears on the screen and asks you a series of questions, which are recorded. All the data is later buy medication canada sent to you through your FamilySearch/email accounts.

For now you can only experience this in Salt Lake City. But this exhibit is meant to be replicated in major venues, and indeed has been booked for at least two so far in Seattle and Philadelphia, says FamilySearch CEO Dennis Brimhall. He chatted with me as I toured and confirmed that they are experimenting with this exhibit in different sizes and scales. He hopes to see versions of the FamilySearch Discovery Center one day in museums, libraries, archives, and heritage centers around the world. “We haven’t done a really good job of bridging the general public into family history,” he admitted. This exhibit concept is a big step toward changing that.

As for myself, I love what they’re doing. I would love even more to see them customized for regional audiences, which it sounds like is part of the plan. If you’re in Salt Lake, it’s absolutely worth checking out. Just bring your relatives–preferably the ones who are now the LEAST interested in family history!