Italian civil records at FamilySearch have been updated for five specific localities. Births, marriages, and deaths are just a few of things you will find in these collections. Also this week, Netherlands, Sweden, Australia, and Alaska. 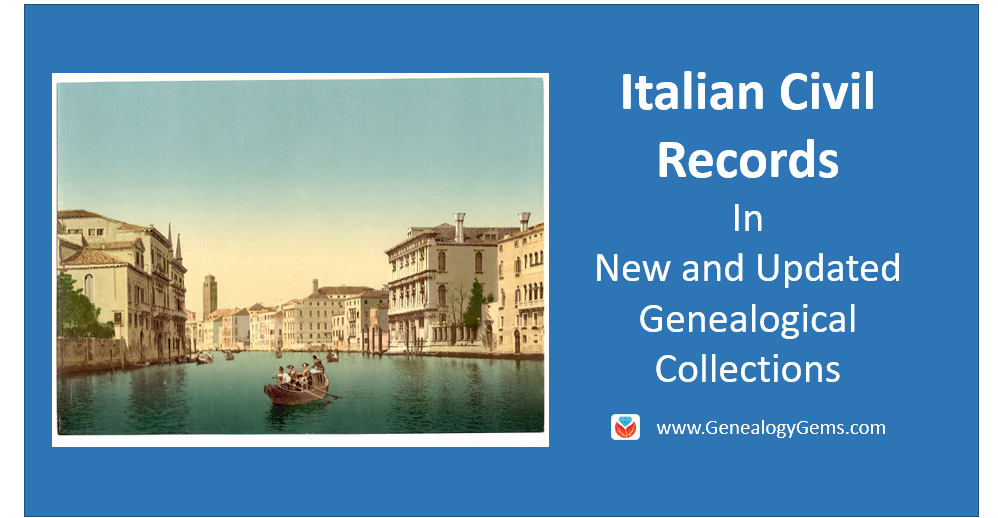 FamilySearch has added to their Italian genealogy records this week. Five specific locales in Italy have Civil Registration records online. Civil registrations include such things as births, marriages, and deaths. They can also include marriage banns and ten-year indexes. Of course, availability of records will depend on the time period and the location.

This collection may include the following records:

The second collection titled Italy, Mantova, Civil Registration (State Archive), 1496-1906 covers several centuries. Images for this collection had been mistakenly made available to the general public who registered at FamilySearch. However, because of the agreement signed 30 June 2011, the publication rights of images belongs to the Italian National Archives (DGA) who publishes them freely to all on their Portale degli antenati: http://www.antenati.san.beniculturali.it/. Though you can see a transcript of the civil record at FamilySearch, you will have to visit the Il Portale Antenati to see the digital images. Some fees may apply.

Again, these civil records for Mantova will include such things as birth, marriage, and death records and in some cases, marriage banns and 10-year indexes. 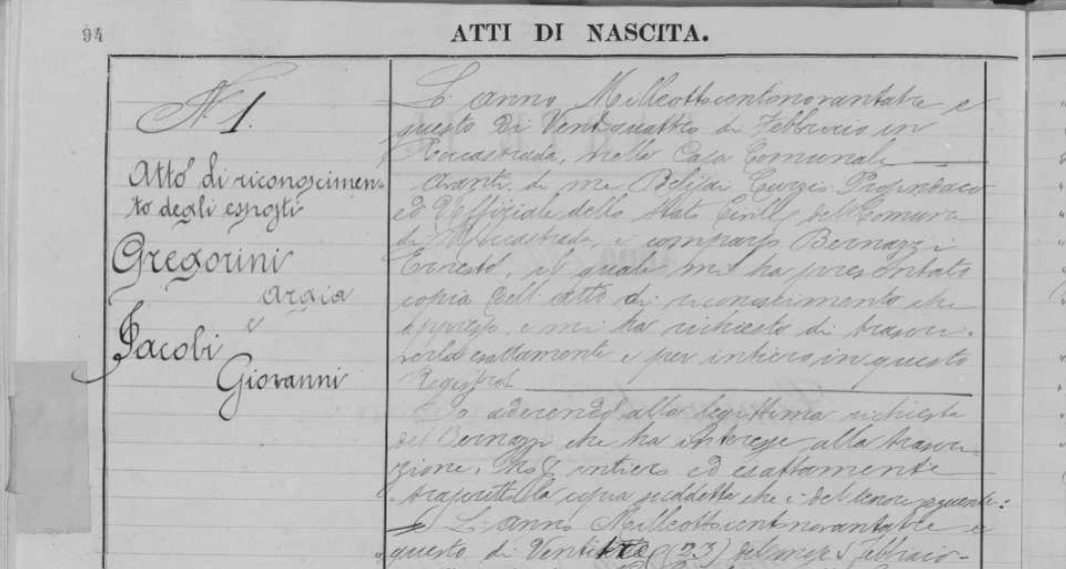 The third collection is titled Italy, Grosseto, Civil Registration (State Archive), 1851-1907. These records will again cover birth, marriages, and deaths in the Grosseto locale. These records, like the others, are written in Italian. In this case, you are able to view many of the digital images online at FamilySearch without having to use the Portale Antenati.

The fourth collection titled Italy, Rieti, Civil Registration (State Archive), 1840-1945 covers the years between 1840 and 1945 of this specific locale. The records held in this collection will largely be the same as the others, but there is something special that these Rieti records hold. They include Catholic parish registers of Poggio Fidoni (Frazione of Rieti) for the years 1768-1860.

Lastly, a fifth collection titled Italy, Enna, Civil Registration (State Archive), 1866-1944 has also been added with lots of birth, marriage, and death records for the vicinity of Enna.

For more details about the contents of all these record sets, their history, and help using them, see the wiki article: Italy, Civil Registration (FamilySearch Historical Records).

Also at FamilySearch, records have been added to the Netherlands, Archival Indexes, Miscellaneous Records. These miscellaneous records include indexes that cover many record sources, such as civil registration, church records, emigration lists, military registers, and land and tax records. These records cover events like birth, marriage, death, burial, emigration and immigration, military enrollment, and more.

Sweden, Norrbotten Church Records, 1612-1923; index 1658-1860 is a recently updated collection at FamilySearch as well. Church records from the county of Norrbotten contains indexes to births, marriages, deaths and images to clerical surveys, registers of birth, marriage, death, move-in and move-out lists, confirmations, and church accounts. Notice that this collection has some index-only items and there are some other items that offer a digital image of the record. Covering such a lengthy period of time, records will vary given the time frame.

The records are handwritten in narrative style and may be difficult to research for beginners.

This week at Findmypast, we bring your attention to Australian Capital Territory Marriages. Each record result contains a transcript of the original record. The information available will vary, but information typically  includes:

Wills and other probate records are a fantastic resource for genealogists. They often contain names of heirs and prove relationships. Findmypast has updated the collection titled Victoria Wills & Probate. In this collection of mostly indexed records, some search results will also include an image of the original probate documents. Records cover the years 1841 to 1989 and may include the following information:

The Victoria Divorce Cause Books 1861-1938 collection at Findmypast may offer you answers to the reason your ancestors parted ways. In Victoria, the Public Records Office Victoria (PROV) holds divorce case records up to 1940. If you are interested in more recent divorce cases, you will need to contact the Supreme Court of Victoria. It’s important to also know that up until 1975, divorce cases in Victoria were heard by the Supreme Court. 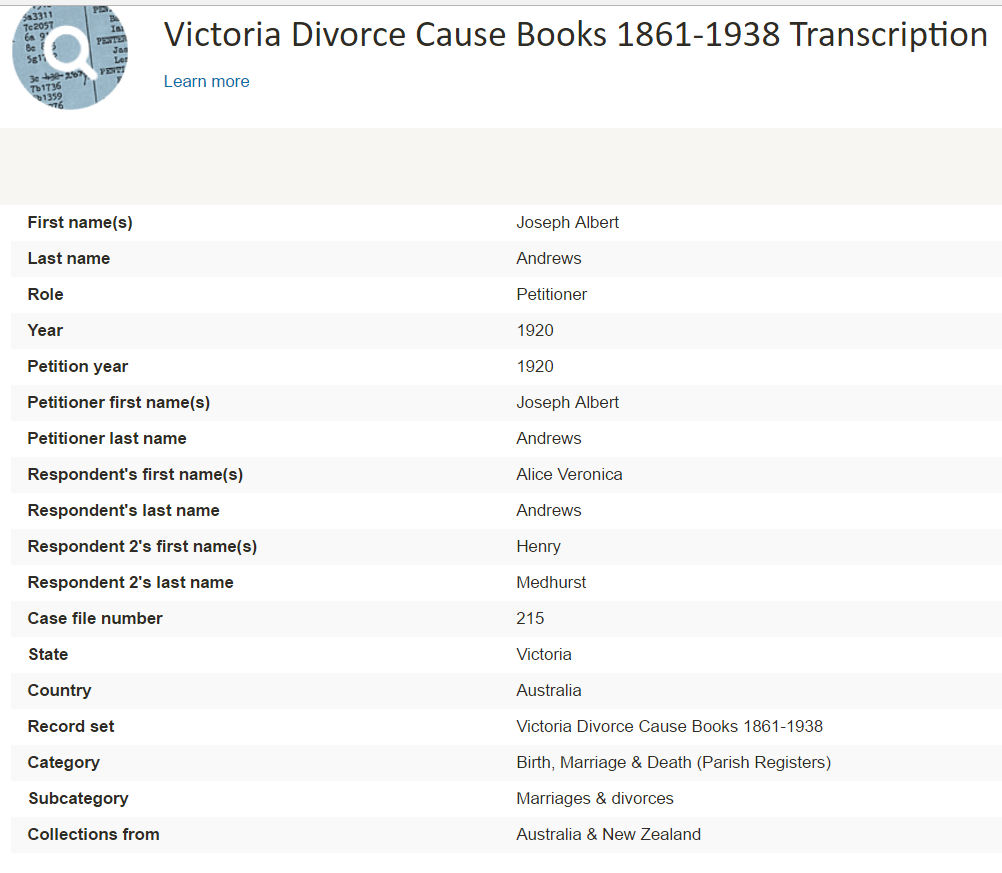 These records will likely provide you with the first and last names of couples, petition date, who filed for divorce, and a case file number.

Did you know that this year is the 150th anniversary of the Alaskan Purchase? We have some great tips for Alaskan genealogy research coming up here on the blog in the next couple of weeks. In the meantime, get started on researching your Alaska ancestors with the FamilySearch collection titled Alaska, Vital Records, 1816-1959.

Mary Tedesco of Genealogy Roadshow (on PBS in the US) talks about doing the show and her tips for doing Italian genealogy research on our Genealogy Gems YouTube Channel. Watch the clip below and be sure to subscribe to our channel so you don’t miss any of our helpful tips and tricks. Thanks for watching, friends.