Adding Source Citations is our third post in the Inherited Genealogy Files series, and in this post, we answer a listener’s question. 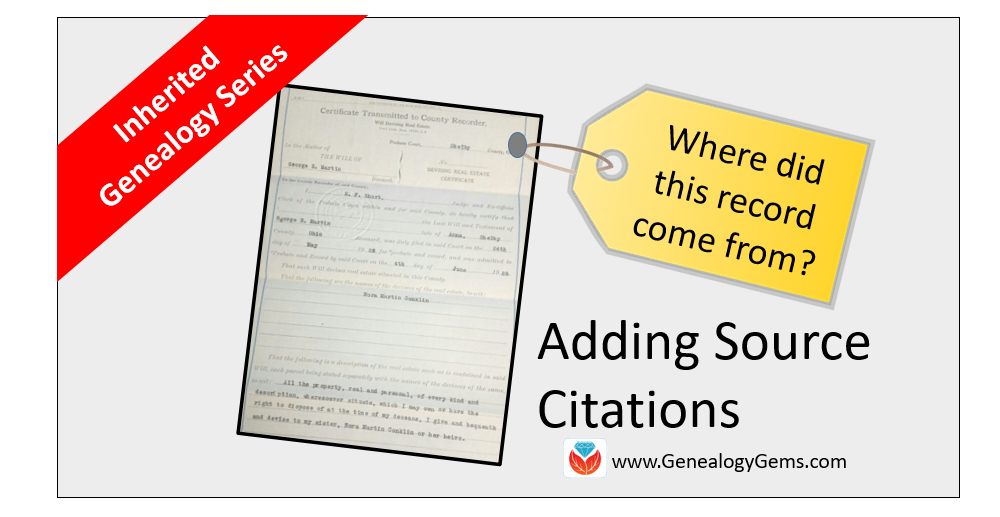 We recently received this letter from a Genealogy Gems Podcast listener, Cristy. She says:

Thank you for your tip about starting from the present and working backwards. I was having a hard time knowing where to start. I had inherited a tree passed from my mom and my great-grandmother, that when combined with the information my husband’s aunt gave me [I had a] tree with almost 1200 names. But the information from my great-grandmother and my aunt does not have any sources and all of my mom’s sources got lost in our various moves over the years. She only had her old school database that just had the facts and no sources.

I determined that a genealogy book my mom used as a source for one of our lines [had been] copied [from] an older genealogy line that has been proven incorrect. So, my goal has been to re-find my mom’s sources and document everything. I didn’t know where to start. I have now made a second tree in my database keeping the original as a place to start and only putting what I have proved using actual sources and attaching the documentation as I go. Your episode on the Genealogical Proof Standard was really helpful. It will be a big help as I clean up my tree.

Let’s first give a brief definition of source citation.

Source Citation: the information that tells your reader where you obtained a particular piece of genealogical data. 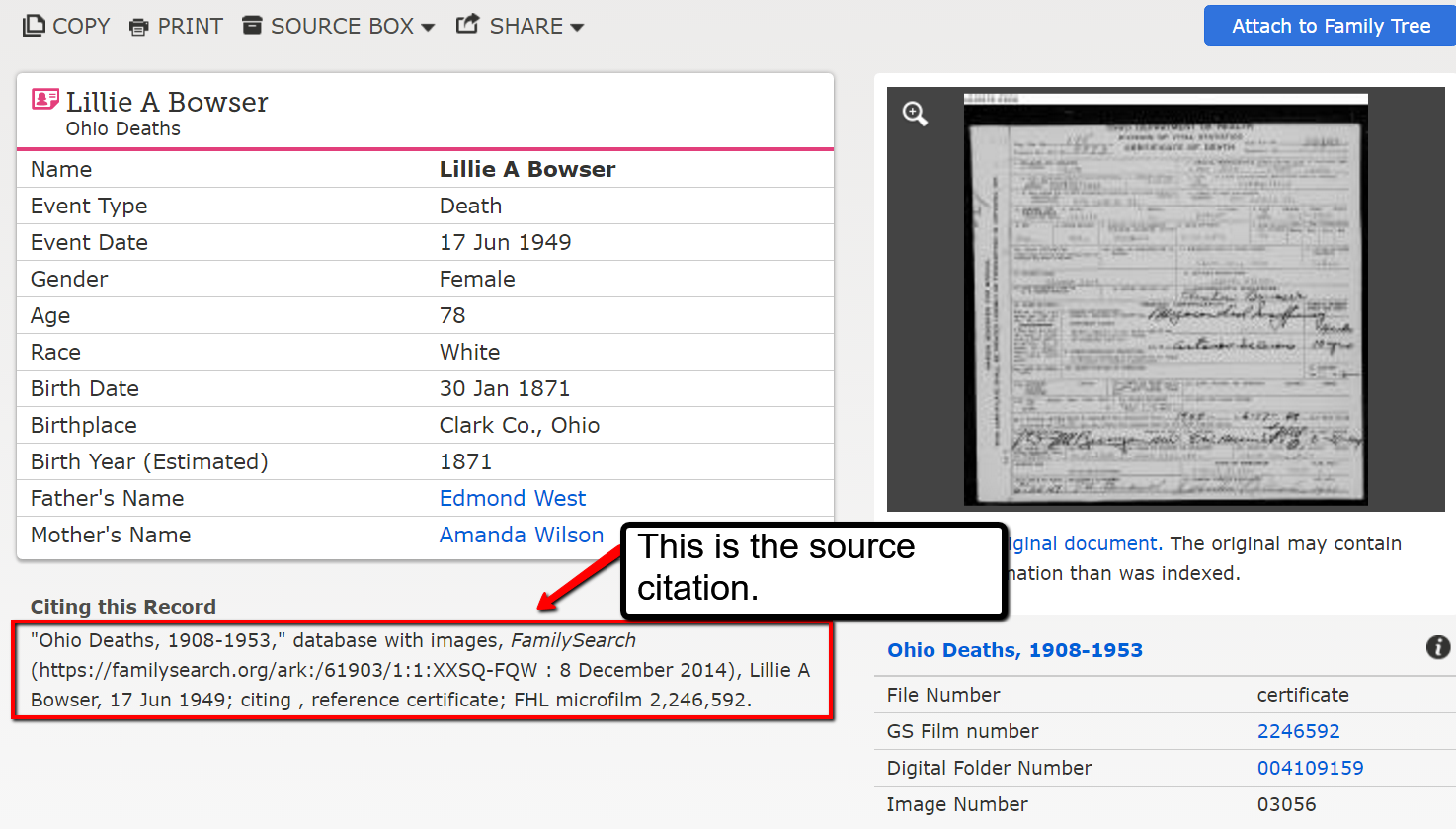 You can highlight the source citation text and copy it into your genealogy software. A bonus is knowing that FamilySearch is free and easy to use.

As I mentioned above, you can take the source citation you found on FamilySearch and copy and paste it into your genealogy software. RootsMagic is the genealogy software we here at The Genealogy Gems Podcast use (and we are proud that they sponsor our free Genealogy Gems Podcast.) It is an easy-to-use and effective software for both PC and Mac users. (To learn more about using RootsMagic, read here.)

Using RootsMagic, let’s add a source citation to an event in a family tree: 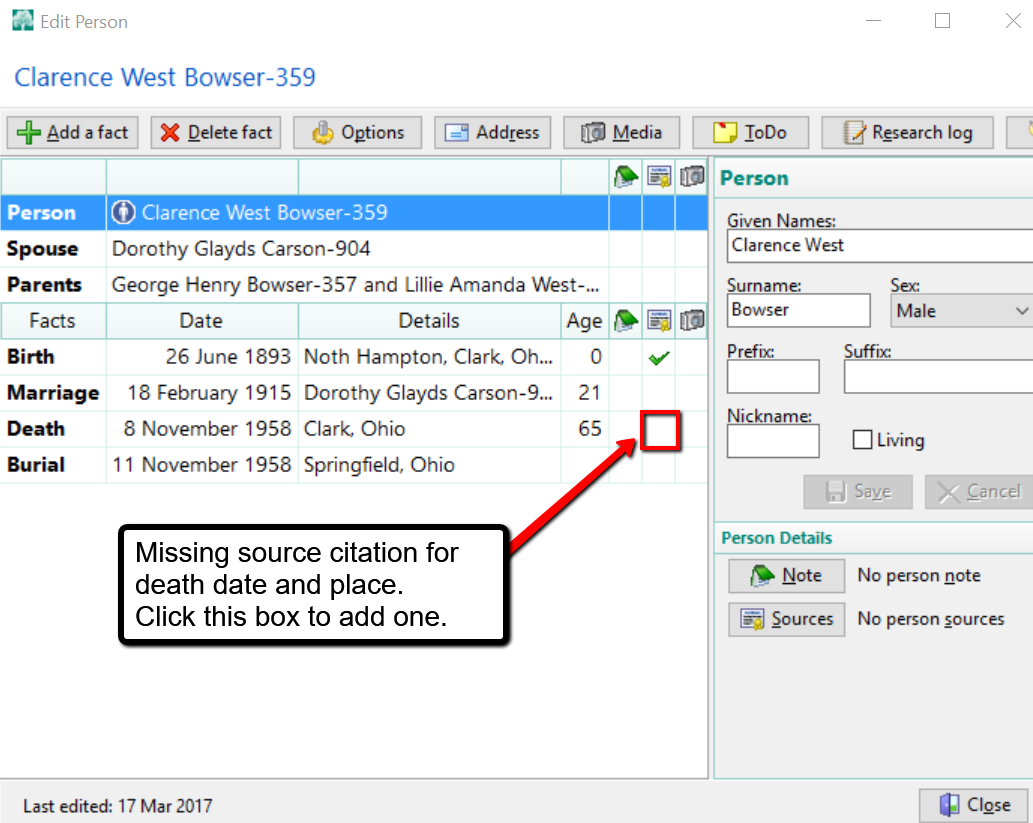 At the pop-up window, we click Add new source and from the options, choose Free Form and click OK. 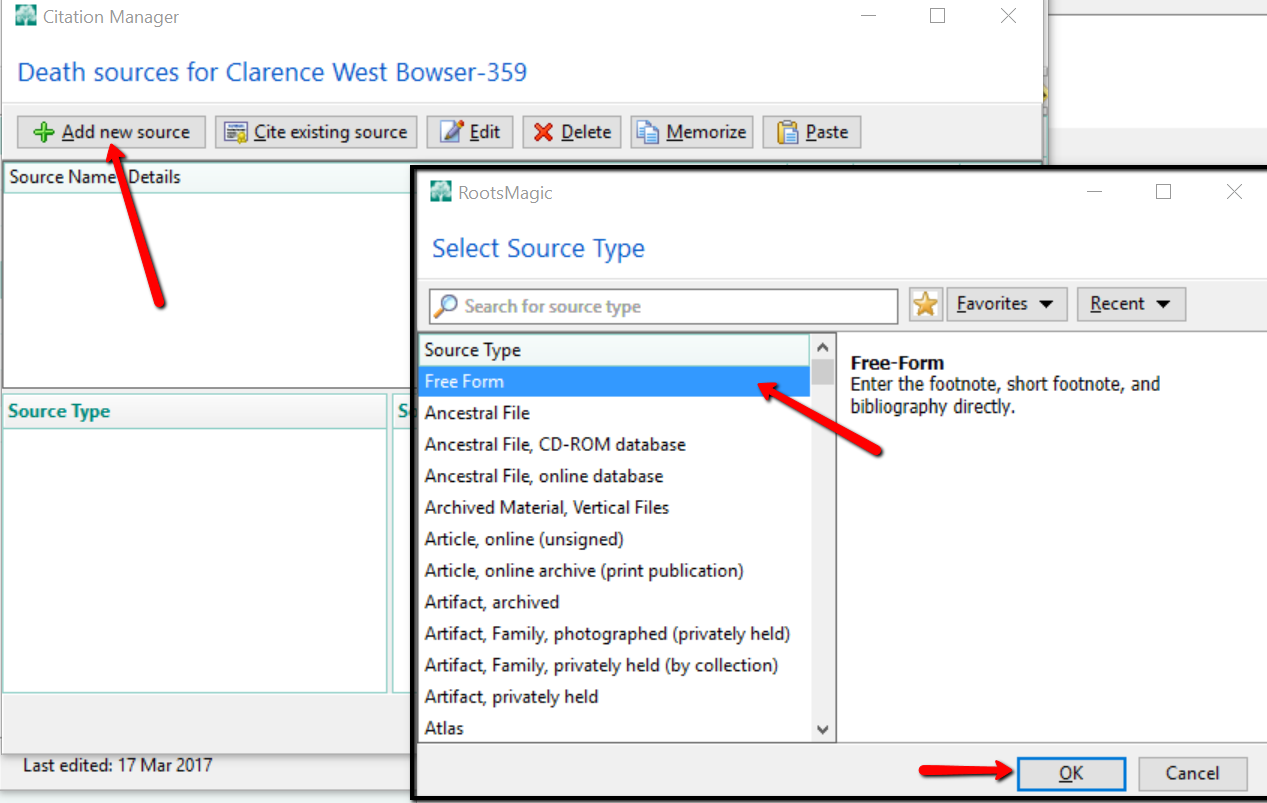 Now, let’s assume you copied the following source citation from a record you found at FamilySearch.org: 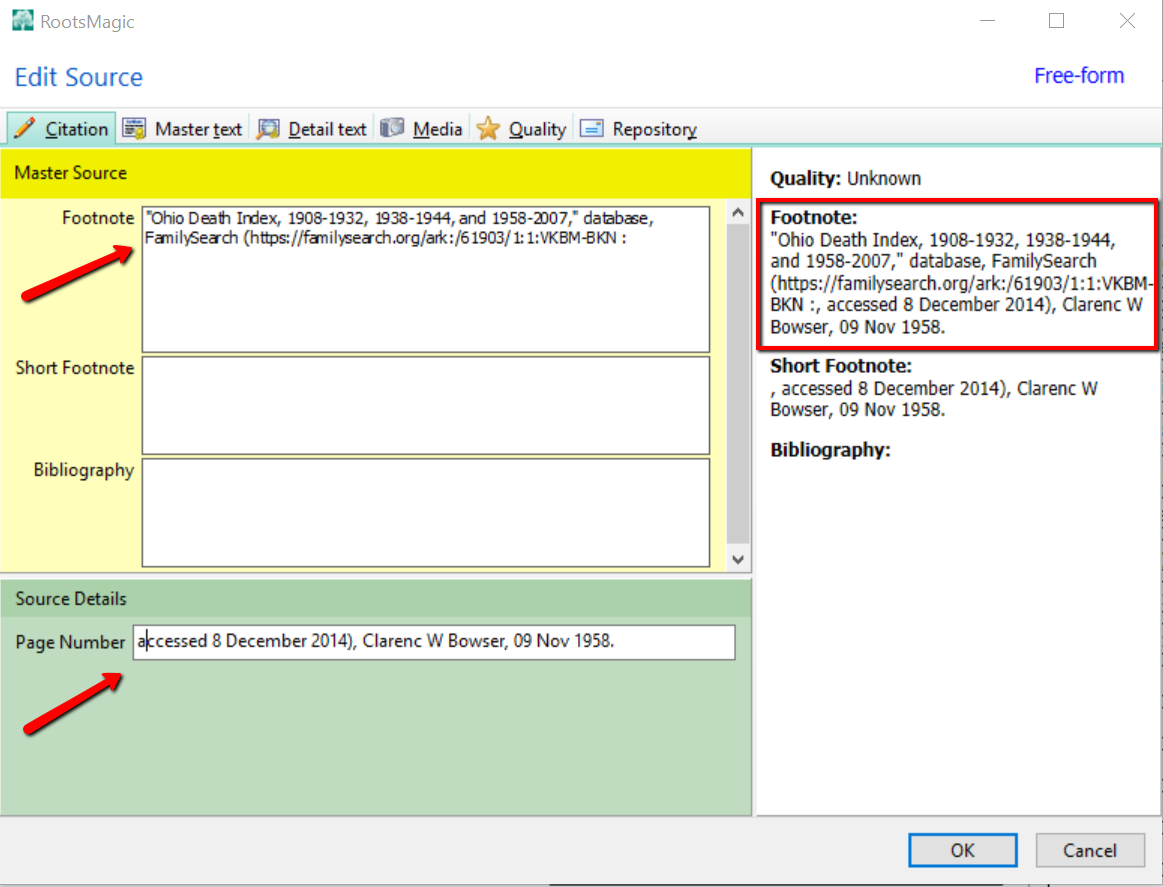 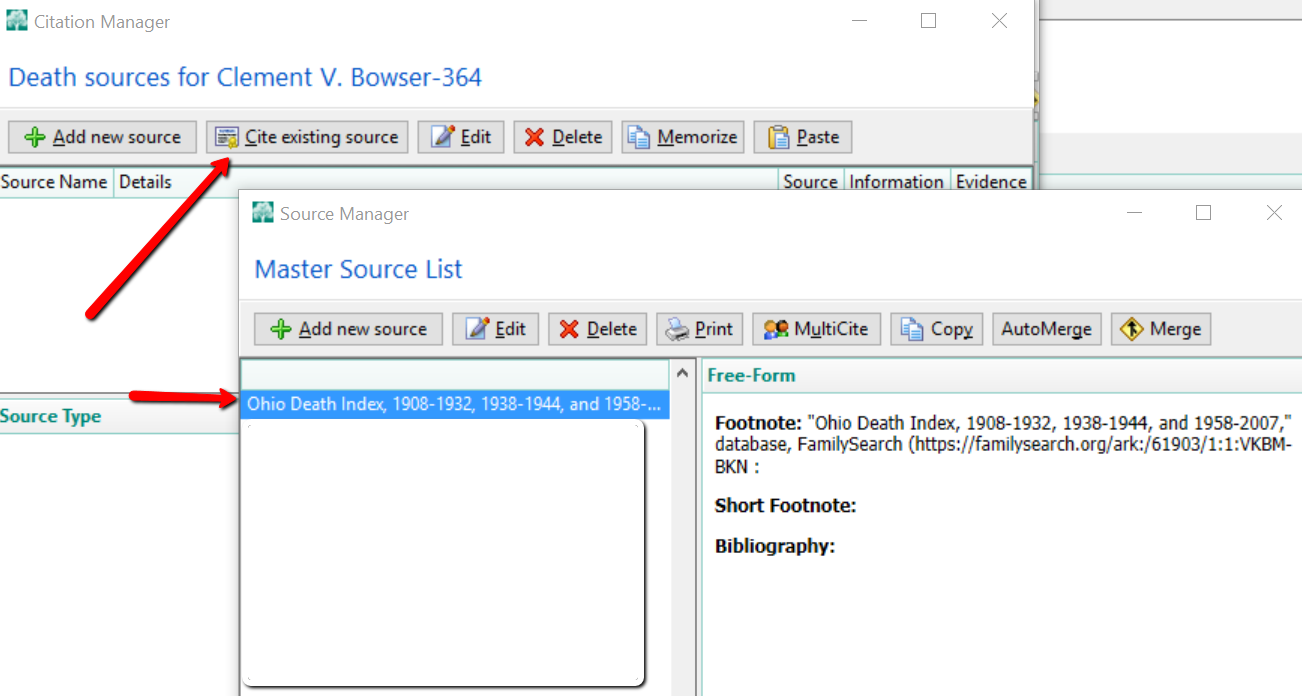 At the next screen, the Footnote field will already be filled out for you. All you need to do is fill in the Page field with the back-half of the new source. 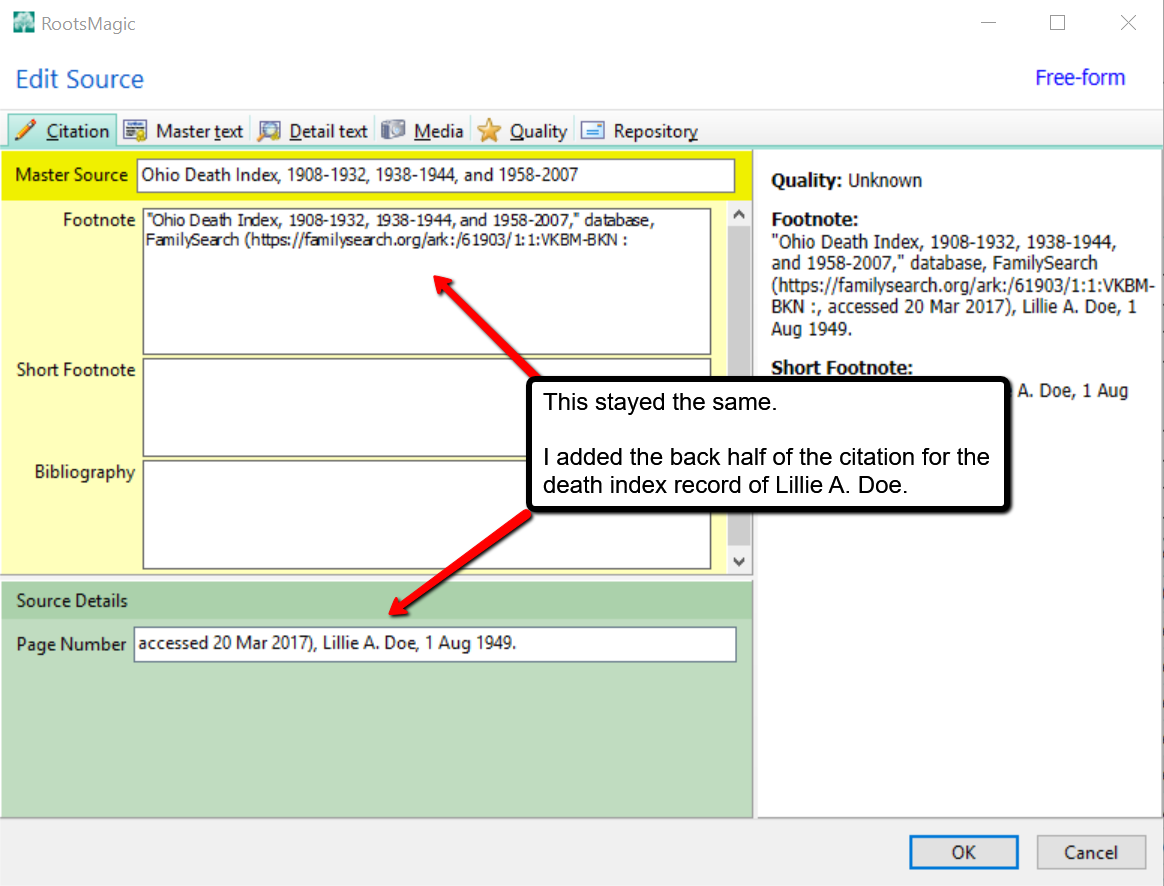 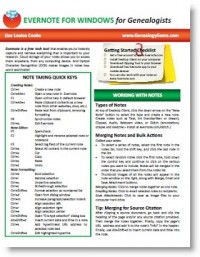 In addition to keeping your source citations on a genealogy software program, you may wish to clip the citation and add it to Evernote. Lisa Louise Cooke explains just how to do this in her article titled, “Cite Your Sources from FamilySearch with the Evernote Web Clipper.”

You can get loads more tips and tricks in our helpful Evernote for Windows for Genealogists quick reference guide (also available for Mac users). Also, get a quick overview about this amazing product from this video clip on our YouTube Channel. 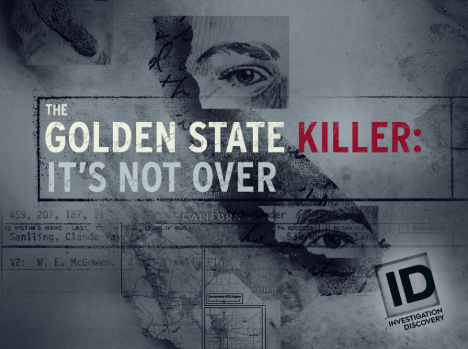 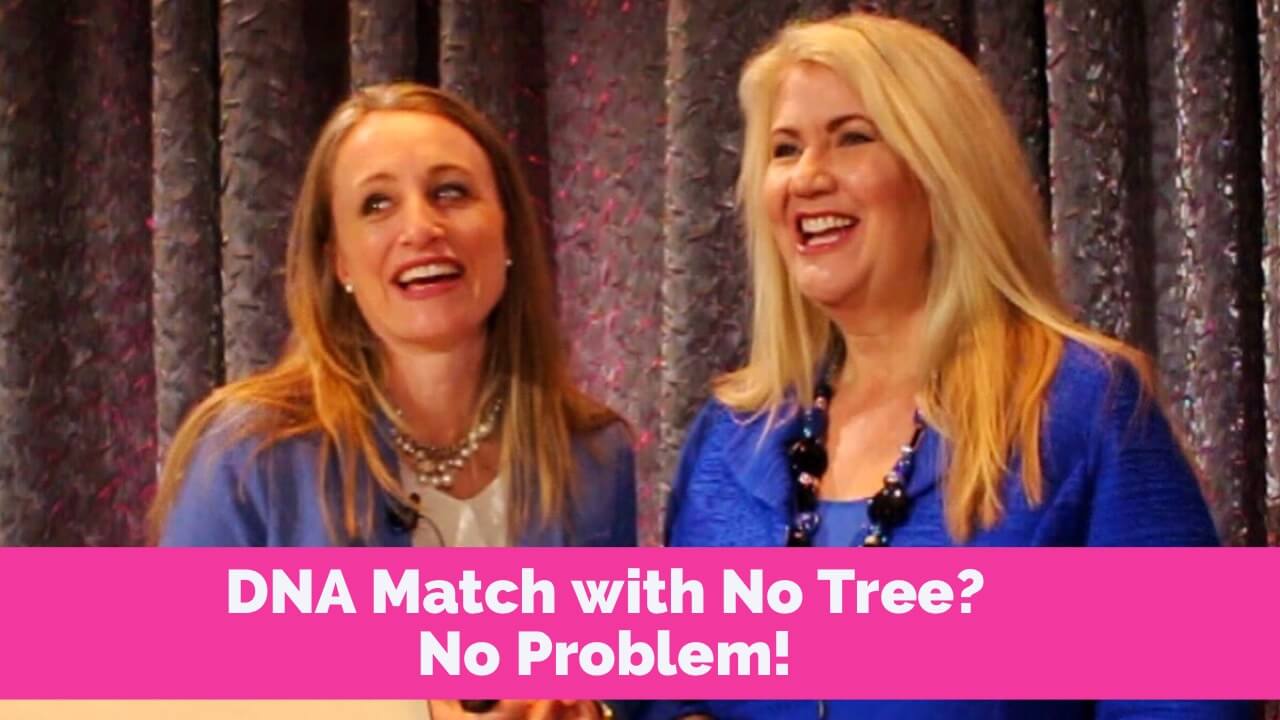 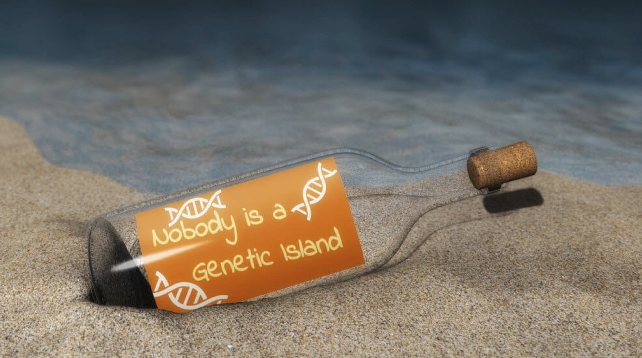