3 Sources for Historic Maps that May Surprise You

Old maps are an essential tool for discovering more about your family’s history. If you have exhausted more traditional sources, here are three places to find maps that may surprise you.

You’re probably aware that the David Rumsey map collection website is a terrific source for old maps. But you may be surprised by the variety of maps, some which you likely don’t come across every day. Here’s a fun little tactic I took today to see what it may hold in store beyond typical maps. A search of the word neighborhood reveals that their holdings go well beyond traditional maps. Here’s an example from San Francisco showing a neighborhood in its infancy: 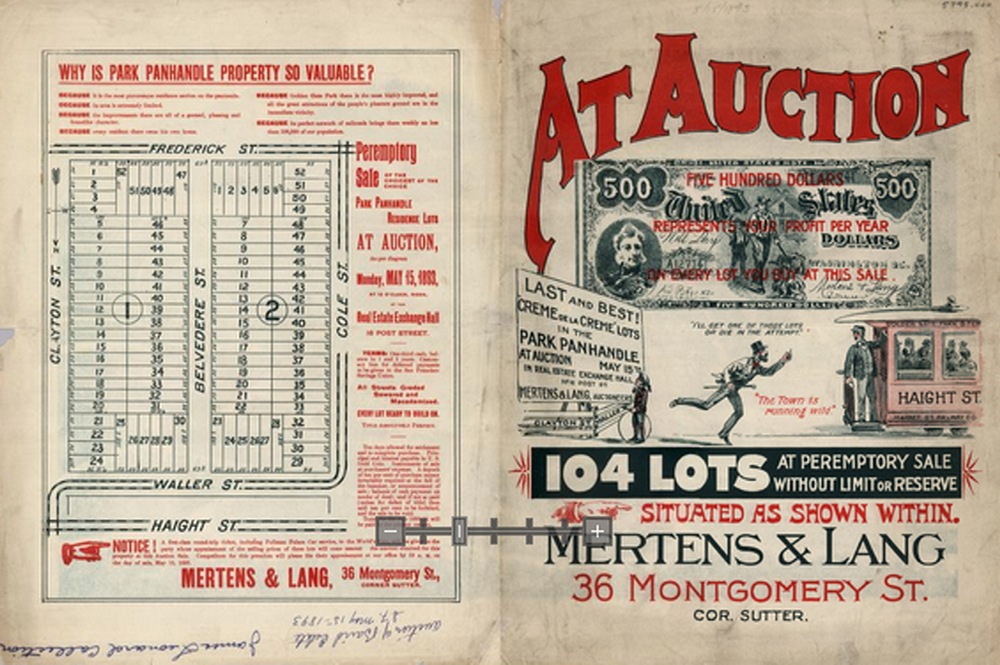 And the image below depicts the Country Club district of Kansas City in the 1930s. If your family lived there at that time, this is a real gem. 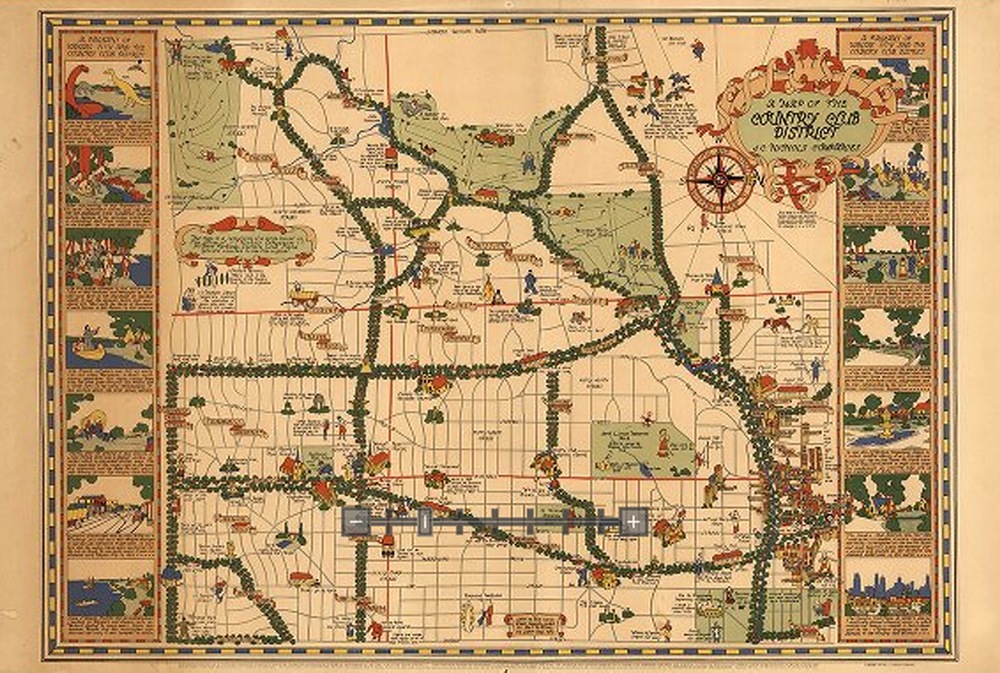 If you think Google Books is just books, think again. Historic maps, often unique and very specific, can often be found within those digitized pages. Try running a Google search such as: neighborhood map baltimore.

Click the MORE menu and select BOOKS. Then click the SEARCH TOOLS button at the top of the results list, and from the drop down menu select ANY BOOKS and then click FREE GOOGLE BOOKS: 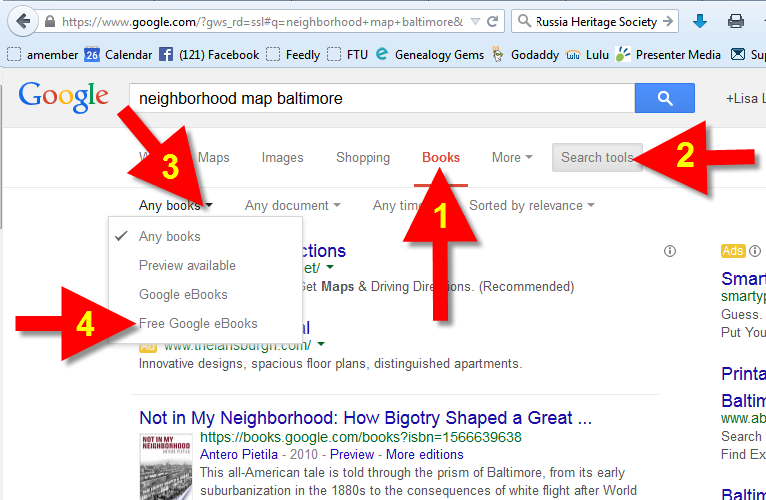 Select a book that looks promising. Then rather than reading through the pages or scanning the index, save loads of time by clicking the thumbnail view button at the top of the book. This way you can do a quick visual scan for pages featuring maps! 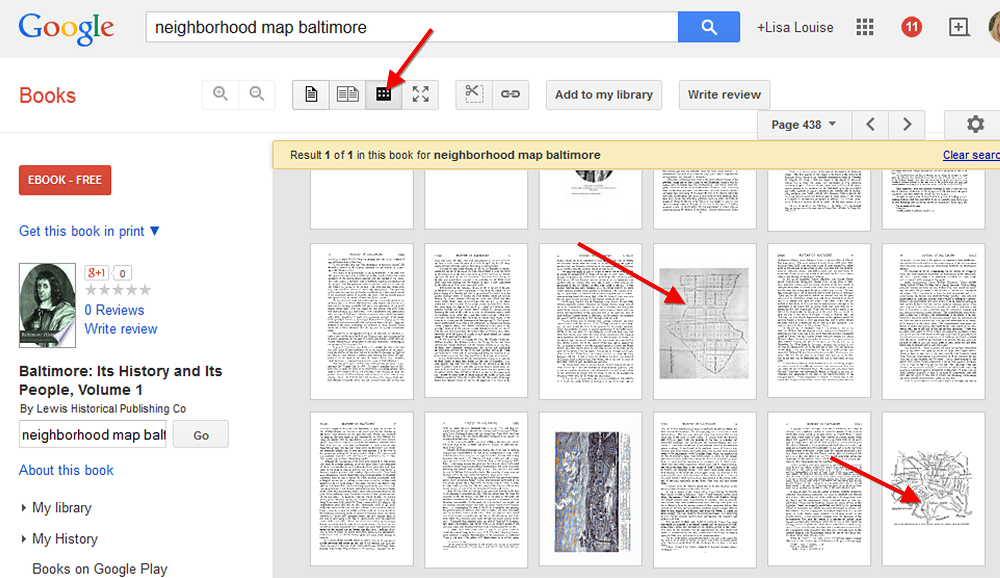 When you find a page featuring a map, click it display it on a single page. You can now use the clipper tool built right in to Google Books to clip an image of the map. Other options include using Evernote (free) or Snagit ($). 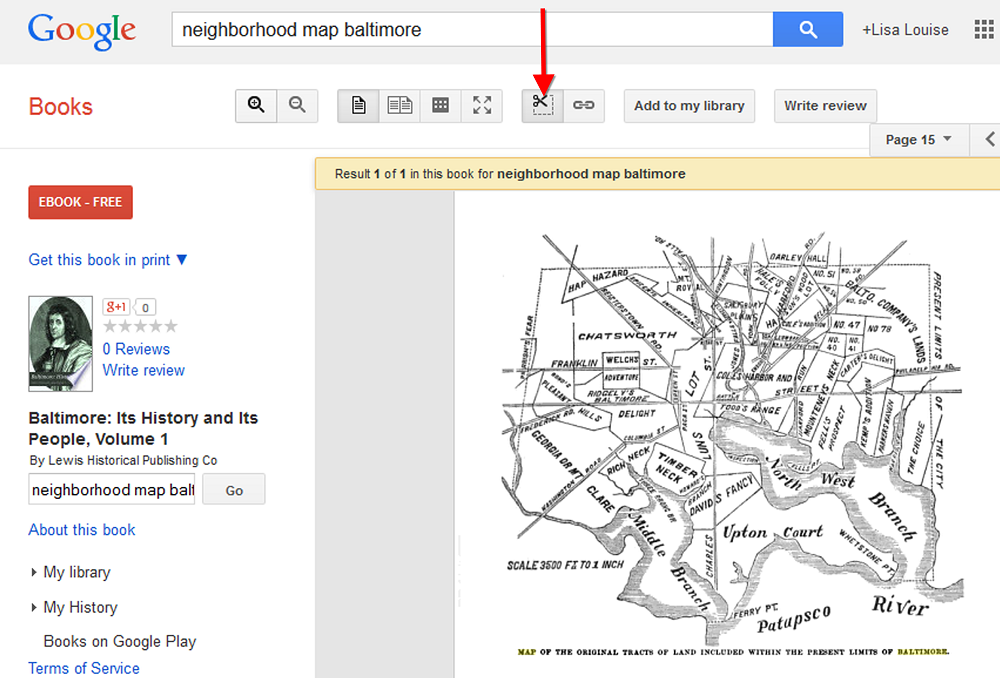 Like Google Books, the digitized pages housed at the Chronicling America website contain much more than just text. Old newspapers printed maps to help readers understand current events like the progress of war or the effect of a natural disaster. This map from The Tacoma Times in 1914 shows a map of Europe and several quick facts about the “Great War,” World War I: 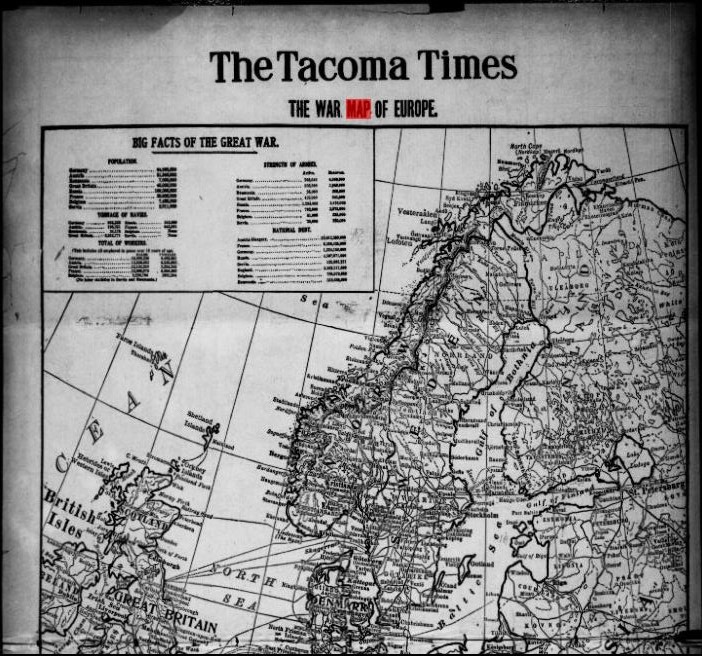 Here’s one more example below. A search for “San Francisco earthquake” at Chronicling America brought up this bird’s eye view of San Francisco at the time of the major 1906 earthquake. Articles below the map explain what you’re seeing: 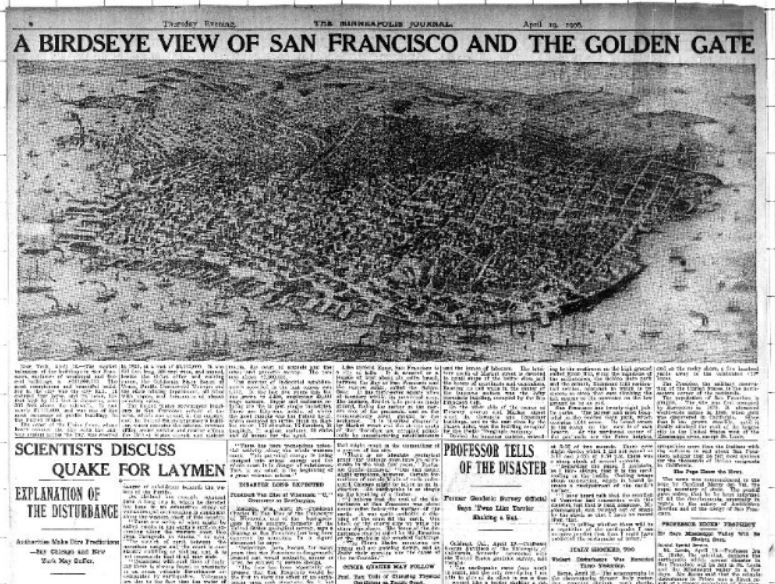 The Minneapolis Journal, April 19, 1906. Image at Chronicling America; click on image to see it there.

Learn more about using newspapers to understand your ancestors’ lives in my book, How to Find Your Family History in Newspapers.

Want more inspiring ideas for finding historic maps? Below is my FREE 8-minute video on using Sanborn maps. This is an excerpt from my Genealogy Gems Premium video, “5 Ways to Enhance Your Genealogy Research with Old Maps.” (Premium membership required to watch that full video along with others like “Best Websites for Finding Historical Maps.”)

“Mama arrived with 4 year old Martha gripping her hand tightly.  She said she looked feverishly around for Papa, and spotted him across the room.  She ran to meet him and gave him a kiss, which she normally would never have done in public!”
That was the scene my Grandma described as Louise and Gustaf reunited near a wooden column outside the Registry Room at Ellis Island aptly known as “The Kissing Post.”  Many public displays of affection took place there after long journeys across the ocean.
Approximately 12 million immigrants were processed through Ellis Island between 1892 and 1954.  It seems like only yesterday that the long dilapidated buildings were finally restored and reopened to the public.  They have become one of the most popular tourist destinations in New York City, welcoming over 35 million visitors to date.
This month marks the 20th Anniversary of the Immigration Museum at Ellis Island which first opened on September 10, 1990.
According to a recent Ellis Island press release , “Just half a mile from the Statue of Liberty in New York Harbor, the museum’s exhibits highlight the growth of America during the peak immigration years of 1880-1924. The galleries illustrate the Ellis Island immigrant reception process, the immigrants’ arrival and settlement throughout the United States and feature their “Treasures From Home” – the cherished personal objects, photographs and papers they brought with them from their homelands. And the American Immigrant Wall of Honor® celebrates the immigrant experience with the inscription of the names of over 700,000 individuals and families who have been honored by their descendants.”
Of special note is the Ellis Island Oral History Archive, which was created by the Foundation and contains the reminiscences of over 1700 individuals who either immigrated through or worked at Ellis Island during its heyday as the country’s largest immigration processing center.   If you are lucky enough to visit in person, you can listen to excerpts from these oral histories through the museum’s popular audio tour.  You’ll walk the corridors vividly reliving the immigrant experience as if you were a “new arrival.”
If an in-person trip is not on your horizon any time soon, don’t fret.  More than 1,700 first-hand life story audio recordings of Ellis Island immigrants are now available online for the first time free at Ancestry.com.
“As immigrants created new lives in the U.S., the stories of their homelands and their remarkable journeys to America were often lost,” said Christopher Tracy, senior vice president of global content for Ancestry.com.  “We are thrilled to offer people the opportunity to hear the voices of their ancestors sharing stories of their lives.”
The oral histories were originally recorded by the National Park Service starting in the 1970s, and contain first-hand accounts recalling the lives these immigrants left behind, their reasons for leaving and their incredible and often-trying journeys to America.  In addition to oral histories from immigrants, the collection also includes recordings from former Ellis Island/Statue of Liberty workers, and military personnel who were stationed on Ellis Island.
“To our family it is important that we in the U.S. know the origin of the people who came to this country, settled here and made it what it is today. It makes us very proud to know that our mother was part of this,” said Yvonne Rumac, daughter of oral history participant Estelle Belford, who immigrated to the United States from Romania via Ellis Island in 1905.
And if you are interested in learning more about your own immigrant ancestors here are some resources for you:
Ancestry boasts the world’s largest online collection of U.S. immigration records. www.ancestry.com/immigration.
(Comprised of more than 170 million records, the Ancestry.com U.S. Immigration Collection includes lists of passengers who immigrated by ship to America between 1820 and 1960, including those who came through Ellis Island; more than 7 million citizenship and naturalization records; border crossings, passport applications and more to help reconstruct our ancestors’ journeys and early lives in America. Ancestry.com has also added nearly 2 million new U.S. naturalization record indexes.)
The FamilySearch Wiki
A brain trust of some of the best researchers out there, the FamilySearch Wiki allows you to search on keywords to learn more about a vast array of topics including immigration.  Much of the information comes from the experts who work at the Family History Library in Salt Lake City.  You get the benefit of their immigration research knowledge from the comfort of your own home.
https://wiki.familysearch.org/en/Main_Page  Then search for the records themselves on the free FamilySearch Beta website
http://beta.familysearch.org/
Stephen P. Morse’s One Step Pages
http://stevemorse.org/
If your search at the EllisIsland.org website doesn’t retrieve your ancestors head on over to Stephen Morse’s One Step Pages.  There you will find  dozens of links to search resources including the Ellis Island Gold Form for arrivals between 1892 and 1924.  Even the folks at Ellis Island refer researchers to Morse’s site.  Listen to my interview with Stephen Morse on Genealogy Gems Podcast episode #10
http://www.genealogygemspodcast.com/genealogy_gems_episode_10
Family History: Genealogy Made Easy Podcast Episodes on Immigration and Naturalizaton
Genealogist Steve Danko covers immigration and naturalization in depth in episodes 29, 30, and 31.  Steve even offers up some little known tips about deciphering some of the crytic notes researchers often find on passenger lists.
29 – http://personallifemedia.com/podcasts/415-family-history/episodes/45846-immigration-naturalization-part
30 – http://personallifemedia.com/podcasts/415-family-history/episodes/46854-immigration-naturalization-part
31 – http://personallifemedia.com/podcasts/415-family-history/episodes/47994-immigration-naturalization-part