Family History in the Annual Christmas Letter? What a Great Idea!

Why not share the gift of family history story in this year’s Christmas letter or holiday cards?

Genealogy Gems podcast listener Catherine just sent in this fantastic idea about including family history in her annual Christmas letter. I thought I’d share it while it can inspire those whose holiday cards or letters are still on their “to-do” list. (Already done? Think about it for next year!) Here’s what she wrote:

“I’ve always been intimidated by the idea of writing [family history]: where to begin, what to write about, what to include, how to say it. When it was time to sit down and write the family Christmas letter and not having much to report, it struck me.  Why not write a family history letter to the cousins about our common maternal Grandfather?

It may not be an original idea but it was new to me, so, deep breath, I took the plunge and the result was a letter that I truly enjoyed writing. I included some fun facts from immigration records and census information, family pictures, a couple of stories and even Google Earth pictures from my Gramp’s birthplace in ‘the Old Country.’ I sourced the letter and added webpage links in case I hooked someone into wanting to know more.”

Thank you Lisa for speaking about Google Earth Pro and my new best friend, Evernote for Genealogy! I can’t wait to see what the family reaction will be. I’m planning some follow up letters and may even go for the big one (gulp)–a blog! I was so inspired I even made two of your wreaths, one for my mother-in-law and one for my best friend, also a genealogy junkie.”

Wow, I love to see how Catherine has taken what I’ve been teaching–from keeping track of sources in Evernote to making wreaths–and RUNNING with it! She says, “Thanks for the great ideas, inspiration and support,” but I want to thank HER for writing in with her enthusiasm and clever ideas. I LOVE the idea of adding the gift of family history–complete with crowd-pleasing Google Earth pictures and proper citations–to your annual Christmas letter. That’s on MY list for next year!

Take These Ideas and Run with Them Yourself with These Helpful How-Tos: 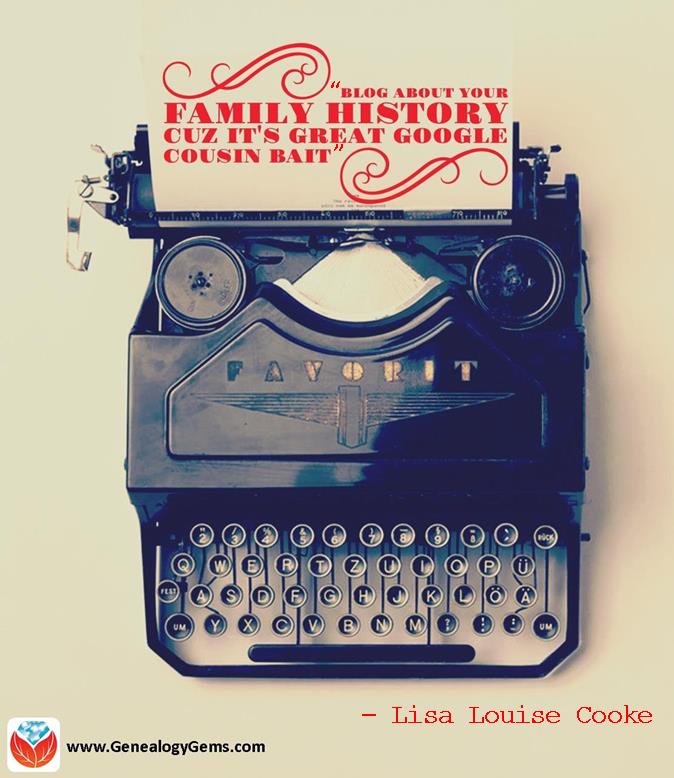 How to Start a Family History Blog

How Genealogists Can Prep for the 1940 Census Release

Genealogy records are about to expand online.  It’s still about 9 months away, but in the time it takes to bring a new descendant into the world the National Archives will be delivering the 1940 US Population Schedules to the public. There are a couple of guys who have been on the forefront of this event: none other than Steve Morse and Joel Weintraub. (You’ll remember hearing from Joel from his past appearance on the Genealogy Gems Premium Podcast.)

Of course family historians are chomping at the bit to dig into the 1940 census even though there won’t be an index when it’s first released. However, the guys have put out a press release about what you can do now to get ready to search:

“It will not be name indexed, so it will be necessary to do an address search in order to find families. Address searching involves knowing the ED (enumeration district) in which the address is located.. The National Archives (NARA) earlier this year indicated they had plans to make available in 2011 the 1940 ED maps of cities and counties, and ED descriptions, but their recent move to consider having a 3rd party host all the images may have appreciably set back this timetable.

The only website that currently has location tools for the 1940 census is the Steve Morse One Step site. There are several such tools there, and it could be overwhelming to figure out which tool to use when. There is a tutorial that attempts to clarify it and an extensive FAQ.

We are announcing the opening of another educational utility to help people learn about the different 1940 locational search tools on the One Step site, and information about the 1940 census itself. It is in the form of a quiz, and should help many, many genealogists quickly learn how to search an unindexed census by location. The new utility is called “How to Access the 1940 Census in One Step“. Not only is it informative, we hope it is entertaining.”

Entertaining it is – at least to those of us passionate about family history! Now you can get started preparing to get the most out of  the 1940 population schedules right away.

There’s another way to prep for the big release. Learn more about the 1940 enumeration process by watching the National Archives YouTube channel’s four short videos created by the US Census Bureau prior to 1940. These films were used to train enumerators on their general duties and responsibilities, as well as the correct procedures for filling out the 1940 census.

Though family historian tend to focus on the population schedule, there were several different schedules created and the films describe the main ones including the population, agriculture, and housing schedules. (Learn more about the various census schedules by listening to Family History: Genealogy Made Easy Episode 10 featuring Curt Witcher.)

The films also cover the duties of the enumerators, highlighting the three major principles they were instructed to follow: accuracy, complete coverage, and confidential answers.

You can watch the first film, The 1940 Census Introduction here and then check out the 1940 census playlist at the national Archives channel at Youtube.

These family history video ideas and comments/questions sent in by Genealogy Gems listeners can inspire your own short videos. See how they script their stories, find royalty-free music soundtracks and more. Then visualize yourself in the director’s chair—what kind of...

In this episode you’ll discover the best places to locate records that can substitute for the lost 1890 census. You’ll learn: