I admit, I dream of a future technology so precise that it pinpoints the locations of ancestors and defines our exact relationships to others. While we are not there yet, many have experienced a genetic test’s power to obliterate previously-held beliefs about relationship and heritage, and create new intricate and personal relationships where before there were only blank spaces. In this sense, genetic genealogy can be viewed as a kind of police force of the genealogy world, righting wrongs and taking names. But I digress.

For now, the ideal must remain a seamless transition between genetics technology and traditional research results, so that the two so completely complement each other that we can’t see where one stops and the other begins. Yet the two worlds are often separated by a chasm of misunderstanding and just plain ignorance. Of the three testing companies, two are making mediocre efforts at best to try to help you incorporate your genetics into your genealogy. They are basically dishing out a serving of genetics, offering a vending machine of genealogy snacks and calling it a full meal.

AncestryDNA has put genetic and genealogical integration at the forefront of its product.  They are the only company making a serious effort to integrate your genetics and your genealogy. To be successful, they need two things: tons of people and their genealogy. The more people test, the better the database becomes. Not just in terms of the matches you find, but also in terms of statistics and the power that numbers have to solve complex problems, like relatedness.

So, how do they get more people interested in genetic genealogy?

This reminds me of my early days at Relative Genetics, one of the first genetic genealogy companies.  I was fresh out of college and tasked with training our CEO, CFO, QA director, and marketing director about what exactly it was that we did as a genetic genealogy company. None of these men had any experience in genetics or genealogy. In those meetings as we were trying to figure out ways to grow our company in an unknown industry, I felt like I was the constant downer to the party.  As a scientist I had been trained that there are no absolutes. Whenever we talk about outcomes it is always in terms of “most likely” or “less likely” and to never, ever say “always.” So when they would get excited about an idea and propose wording for an ad campaign, I was always reining them in.

After reading a recent announcement by AncestryDNA, I feel like their marketing department had a meeting on the day their scientific advisor was out sick and without his or her corralling, they started a stampede.

Which, of course, was exactly what they wanted.

In their press release, Ancestry’s Dr. Ken Chahine, SVP and GM of AncestryDNA said, “It is effectively a shortcut through time—you take the test today and we tell you who your ancestors were, for example, in the 1700s. You don’t need to research records or build a family tree — AncestryDNA now transports you to the past.”

Which is exactly what people want to hear, especially non-genealogists who are curious about their past, but don’t have the tools or know-how or interest in doing the actual genealogy work.

But is it true? Is genetic genealogy a short cut through time?

“Sometimes, and that depends on factor A, and factor B and situation C and…” say the scientists.

And they are both right. The trick is to hear them both as you review these kinds of new advances in genetic genealogy.

What makes the “absolutely” true is that one of the dreams of genetic genealogy is to use the DNA of living people today to actually reconstruct the genetics of our ancestors. So that their actual DNA profile is known. Then it will be easy to identify their descendants as we will be able to see immediately what part of our DNA came from which of our ancestors. Ancestry has demonstrated their ability to do this in a large scale study of the descendants of a 19th-century American and his two successive wives.

Now, time for the “Sometimes.” This full genome reconstruction hasn’t been done yet for your grandparents, or great grandparents. Right now the best we can do is use your DNA to link you to living individuals, then rely on your traditional genealogy to help you find your common ancestor. Ancestry is trying to help you do that using their DNA circles, and now with their New Ancestor Discoveries.

Remember that to be included in a DNA circle you have to have a “ticket” to the party, meaning both your genetics and your genealogy match with at least two other people in the database and a circle is created around the host of the party, who is your common ancestor.

With New Ancestor Discoveries, we are letting those with just a genetic ticket into the party. Meaning that if you share DNA with two or more people in a DNA Circle, the host of that circle is named as an ancestor who might be on your pedigree chart.

Did you notice how I said “might?” That this newly discovered ancestor MIGHT be in your pedigree chart?

As an idea, New Ancestor Discoveries is VERY EXCITING, don’t you think? To be able to find out using both genetics and genealogy that a particular person living 100 years ago might just be the one who belongs in that blaring blank space on your pedigree chart? And it will be. But right now, Ancestry needs to work out some bugs, starting with a stronger acknowledgement that the ancestor listed in the Discoveries is by no means an absolute, but just a hint.

In coming posts I will share with you how I am using the New Ancestry Discoveries to discover more about my genealogy, even if it isn’t exactly in the way Ancestry intended. For now, learn more by reading my recent posts: from the left side of the Genealogy Gems home page, search on the category “DNA.”

And click here to visit my website and learn more about how I can help you navigate the exciting world of genetic genealogy.

One of the most important things we do as genealogists is share! We share research findings, family stories, trees, heirloom photos and more. These days, sharing online is often the way to go. It’s fast, it’s relatively organized, it gets things into the hands of those who want them and (often) it’s free!

To wrap this series of blog posts on collaborating, I offer 4 ways to share genealogy online (in addition to Dropbox and Evernote, which we discussed in previous posts).

1. Attach scanned documents, photos and stories to your online tree.  Whether you keep a tree at MyHeritage, Ancestry, FamilySearch or another site, beef it up with everything you have. That only enriches the body of knowledge out there and gives others a leg up on the next bit of research. You can also include links to applicable notes in Evernote.

2. Post gravestone photos and other burial information at online cemetery sites. BillionGraves and Find A Grave are the two big ones, of course. These sites provide searchability and a platform for collaboration between descendants.

3.  Post meaty queries that show what you know and what your questions are. RootsWeb and USGenWeb are two enormous sites, organized by location and topic, where you can post questions about people, places and more. Check out this page on how to write a good query and this Cyndi’s List portal to various message boards. TIP: Remember to include all important related keywords, name and location spellings, and dates  in your messages so they are easily found by your long lost cousins using Google!

4. Publish your research. Genealogy newsletters, magazines and journals of all levels (from the local to the national and beyond) want your well-researched, well-written research. What’s a chunk of research you could share? Look for publications that are indexed in PERSI, the Periodical Source Index, because other genealogists are most likely to find your work when it’s indexed there. Of course, family history websites, blogs and books are all great ways to publish your research, too. Just get it out there!

As the online genealogy community continues to grow, our opportunities to grow bigger, better family trees also grow. So my question to you is: What do you have to share? And have you begun? 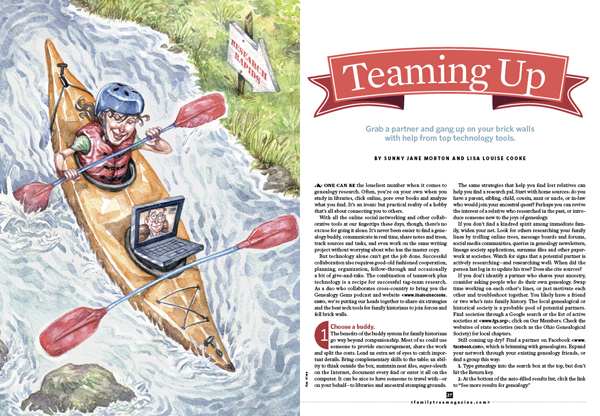 Check out the magazine article that inspired this series of posts on collaborating. It’s “Teaming Up,” and it appears in the December 2013 issue of Family Tree Magazine. Sharing genealogy files is just one topic we cover. The article itself was a cross-country collaboration between myself and Genealogy Gems Contributing Editor Sunny Morton. To write it, we relied on a lot of the same tips and tools we recommend!

Finally, check out my previous blog posts in this mini-series on collaboration:

Tips for Collaborative Genealogy: Research with a Partner