How to Delete and Merge Duplicates in Ancestry Family Tree

Does your online family tree suffer from duplicate leaves? If so, you’re not alone. Hundreds of people seem to have this problem, based on the popularity of a YouTube video tutorial by The Barefoot Genealogist. This tutorial teaches you how to trim extra foliage from your online Ancestry.com family tree or in Family Tree Maker. 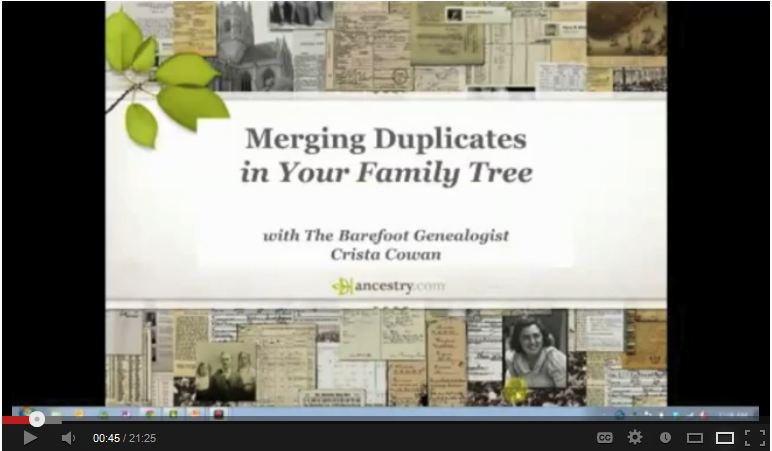 First, presenter Christa Cowan describes how we often end up with duplicates on the family tree. Sometimes people attach records buy anti worm medication for humans incorrectly to individual profiles in Ancestry.com—she shows how to do it correctly, without accidentally creating someone new. And, bonus: she shows how to attach records to more than one person at a time (you want everyone in the household to have that 1920 census record attached to their profiles)!

Watch this video to learn how to look for unwanted duplicates and then use the “merge duplicates” feature to clean up any mess or confusion.

Ancestry.com has improved the ability of AncestryDNA to find good matches for Jewish, Hispanic and other ancestries that maybe weren’t so precise before. Here’s the lowdown, quoted liberally from Ancestry.com’s press release:

The problem: Predicting genetic relatives among customers of Jewish and Hispanic descent and some other groups. “In DNA matching, we are looking for pieces of DNA that appear identical between individuals,” says the release. “For genealogy research we’re interested in DNA that’s identical because we’re both descended from a recent common ancestor. We call this identical by descent (IBD). This is what helps us to make new discoveries in finding new relatives, new ancestors, and collaborating on our research.”

“The challenge in DNA matching is to tease apart which segments are IBD, and which ones are IBS….Most Jewish customers find that we predict them to be related to nearly every other Jewish customer in the database….Detecting which cousin matches were real and which ones were bogus has always been a challenge for these populations.”

First step toward a solution: “By studying patterns of matches across our more than half a million AncestryDNA customers, we found that in certain places of the genome, thousands of people were being estimated to share DNA with one another–likely a hallmark of a common ethnicity. Our scientific advancements… have allowed us to effectively “pan for gold” in our matches–by throwing out matches that appear to only be IBS, and keeping those that are IBD.”

“While the problem was more pronounced in customers of Jewish and some Hispanic descents, we observed this problem across all ethnic groups.  So, all customers will see increased accuracy of their DNA matches, and significantly fewer ‘false’ matches.”

AncestryDNA results with better matches found by this method “will be available in the coming months,” says the release. They plan to email existing customers when results are ready.

Here’s a cool website about ancient civilizations. It’s TheAncientWeb.com, and it looks like a fun and easy way to get up to speed on history.

As the title hints, this site is all about deep roots. It covers ancient societies in all parts of the world: North and South America, Europe, the Near East, Africa, Asia and Oceania. You’ll find history and images of artifacts on peoples ranging from Arabians to Vikings!

This is a great interactive tool for brushing up on ancient history. Check it out with your kids or grandkids who are exploring these topics in school or because they’re reading books like the Percy Jackson & the Olympians Series

(based on Greek and Roman mythology).

But this is also a helpful resource if you’re looking to learn more about your “deep ancestry” as identified by DNA tests. You may never know if you descend from a famous (or infamous) warlord, ruler or explorer. But genetic tests are becoming more specific about deep geographic roots. So maybe it’s worth checking out a little Viking warrior fashion or learn about the ancient empire of the Mandingo on this site!