File Search Trick, and Prepping for an Archive Visit

Podcast Listener Joan wrote me recently:  “I get to spend a day at the National Archives. What should I do to prepare to take full advantage of the visit? I checked their website, but it was not as helpful as I hoped. Any suggestions?”

While this first resource is from the National Archives in the UK, it’s applicable to archives in other countries as well.  Check out their video series called Quick Animated Guide.

Another good approach is to search for presentations on archive visits using Google.  By conducting a ‘file type search’ in Google you can uncover presentations posted on the Web that are geared to doing research at the National Archives. 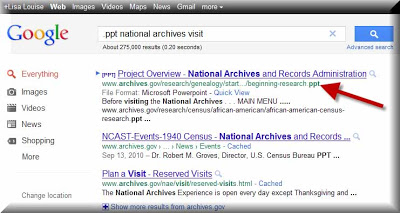 You may not be able to get out to genealogy conferences very often, but some creative searching may bring up presentations that cover topics that interest you right from your home computer. That’s a little gem you need to add to your search toolbox for sure!  For more search gems check out my book The Genealogist’s Google Toolbox.

Great question Joan and have a wonderful time! Happy hunting everyone!

We Dig These New Genealogy Records Gems every Friday!

Every week, we see so many new genealogy records posted online! We highlight major resources in individual blog posts. But sometimes smaller or

regional collections catch our eye, too. We’ll round these up for you in a post like this on Fridays.

Watch for the genealogy records that your ancestors might appear in–but also watch for the kinds of records that may be out there for your kin, which might help you break down your family history “brick walls.”

CEMETERY HEADSTONES. The Canadian Headstone Photo Project is now also searchable at FamilySearch.org. The original site with over a million headstone photos isn’t new. But some people don’t know about the site, and its search interface isn’t as pretty or flexible. So we think it’s nice that FamilySearch is hosting that data, too. According to FamilySearch, the collection is still growing. “This collection will include records from 1790-2013. The records include a name index of headstone inscriptions, courtesy of CanadianHeadstones.com, which is a family history database of records and images from Canada’s cemeteries.”

HISTORICAL PROPERTIES MAP INTERFACE. The state of Delaware in the United States has launched an updated version of its CHRIS (Cultural and Historical Resource Information System) GIS tool. Use this interface to explore houses, districts and National Historic Landmarks in your ancestor’s Delaware neighborhoods. Maybe a place they lived, worked, shopped, worshiped or attended is still standing!

Not sure how to find record sets like these for YOUR family history? Here’s a tip! Use the “numrange” search operator in Google to locate records from a particular time period. Do this by typing the range of years to search (first and last year) into your Google search box, with two periods in between (no spaces). For example, the search “Kingston Penitentiary” 1900..1920 brings up the ledgers mentioned above.