Who Do You Think You Are Separated From By Six Degrees? 1/3/11

Last night I finally found time to curl up in front of the fireplace and read the biography of a favorite actor of mine, Claude Rains. (Image left) My daughter Vienna gave me the book, as we regularly get together and watch his old movies recorded on DVR.

As I made my way through the tales of the years of his youth in London, I came across a name that had surfaced during my Cooke family history research a few months ago:  renowned British actor and theater producer Herbert Beerbohm Tree.

Rains got his start in early 20th century theater working for Tree at his Her Majesty’s Theatre as a page and call boy, and was soon promoted to prompter. At the same time, London actress Roberta E. Munns (born 1876) was a hit on the London stage – specifically Herbert Beerbohm Tree’s Her Majesty’s Theatre stage.  According to Grandfather Cooke’s unpublished autobiography, his Aunt Roberta had become quite famous, most notably starring in the lead in The Eternal City.

Based on these accounts, the Six Degrees of Separation between a film buff (me) and Claude Rains emerges:

Actually that may just be Four Degrees.  The Invisible Man appears in the Cooke Family History!

Are there Six Degrees of family history separating you from a famous figure or someone you admire?  Post your comments here!

Genealogy Gems is the only genealogy podcast to enter the app market, and we’re thrilled at the overwhelming response from our listeners:
Susan H. wrote on Facebook: “Wow, you granted my wish! Lisa, you are awesome! Going to install it right now. Thanks for the early Christmas present.”

And Mary L. emailed exclaiming, “The Genealogy Gems Podcast is now on my Droid phone! It was very easy to download and install, and, it works like a charm! Best $2.99 I’ve spent in a long time. Thank you for making this available.”

The Genealogy Gems Podcast App for Android allows genealogists to stream the entire catalogue of podcast episodes (which has just topped 100!) as well have exclusive access to bonus content such as videos, pdf files and much more. The new app is compatible with OS 1.6 or later.

Downloading this little gem is easy as going to the Android Marketplace and doing a quick search on Genealogy Gems Podcast. Or check it out at the AppBrain website.

Harnessing emerging technology for genealogy is my passion, and I’m committed to staying on the cutting edge. My hope is that our iPhone and Android apps will help genealogists around the world find it even easier to listen to the show so they can stay up to date on the latest genealogy news, research tips, interviews and project.

It starts out so innocent.

You and your spouse decide you want to take the family out for a day of enjoying the great outdoors.  The climb up the local mountain is challenging and exhilarating. Now it’s time to head home, back down the mountain.  But as darkness starts to fall the trail becomes dim.  Things aren’t looking like they did on the way up.  The kids are cold and tired, and all of a sudden it’s not so much fun.

That’s exactly what happened to a family that made the trip up  Mount Tzouhalem in British Columbia, Canada recently.  They called for help on their cell phone, and Cowichan Search and Rescue was on the case.  But how would then narrow down where to look for the stranded family?  Pull up Google Earth of course!

According to the article “Search and Rescue Uses Google Earth to Find Missing Family” from the BCLocalnews.com website, searchers reviewed the terrain in Google Earth looking for landmarks, buildings, and fences described by the weary travellers.  They were brought home safe and sound.

Sometimes looking for ancestors can feel a bit like being lost in the wilderness.  Thankfully, you can use the same strategies employed by this innovative search and rescue team to locate the lost.  That’s what my DVD series Google Earth for Genealogy is all about!  After I was able to identify the exact location where a 100 year old family photo was taken with Google Earth, I knew the genealogical potential for this free program was limitless

Check out these videos to see what you’ll learn!

Yabba Dabba Do!!!!
Today is the 50th anniversary of The Flintstones, everyone’s favorite modern stone-age family!

Fred, Wilma, Barney and Betty debuted before I did, which means I can’t really remember a time without them on the family tube.  In fact, as a budding genealogist, I insisted on a visit to the Flintstone’s “village of origin” when I was just a girl in pigtails… 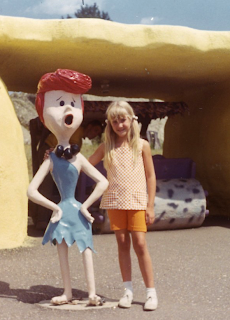 Back in 1971 our family jumped in our Valiant and headed to Bedrock City in Custer, South Dakota.  After a long trip in the non-air-conditioned ‘family outing mobile’ (as my friend Cindee fondly referred to it) we unstuck our sweaty thighs from the green plastic-like upholstery and jumped back in time to an earlier mode of transportation: 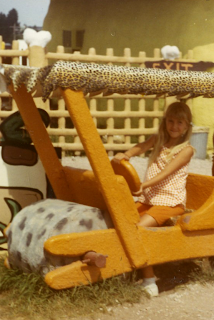 Good times, good times…Happy Anniversary Flintstones!
Check out Google’s tribute to the Flintstones by going to www.Google.com – if you’re an iGoogle you’ll need to sign out for a moment to get the effect.

“Mama arrived with 4 year old Martha gripping her hand tightly.  She said she looked feverishly around for Papa, and spotted him across the room.  She ran to meet him and gave him a kiss, which she normally would never have done in public!”
That was the scene my Grandma described as Louise and Gustaf reunited near a wooden column outside the Registry Room at Ellis Island aptly known as “The Kissing Post.”  Many public displays of affection took place there after long journeys across the ocean.
Approximately 12 million immigrants were processed through Ellis Island between 1892 and 1954.  It seems like only yesterday that the long dilapidated buildings were finally restored and reopened to the public.  They have become one of the most popular tourist destinations in New York City, welcoming over 35 million visitors to date.
This month marks the 20th Anniversary of the Immigration Museum at Ellis Island which first opened on September 10, 1990.

Learn more about the Museum by watching this video: (you can check email while the ad runs at the beginning!)

According to a recent Ellis Island press release , “Just half a mile from the Statue of Liberty in New York Harbor, the museum’s exhibits highlight the growth of America during the peak immigration years of 1880-1924. The galleries illustrate the Ellis Island immigrant reception process, the immigrants’ arrival and settlement throughout the United States and feature their “Treasures From Home” – the cherished personal objects, photographs and papers they brought with them from their homelands. And the American Immigrant Wall of Honor® celebrates the immigrant experience with the inscription of the names of over 700,000 individuals and families who have been honored by their descendants.”
Of special note is the Ellis Island Oral History Archive, which was created by the Foundation and contains the reminiscences of over 1700 individuals who either immigrated through or worked at Ellis Island during its heyday as the country’s largest immigration processing center.   If you are lucky enough to visit in person, you can listen to excerpts from these oral histories through the museum’s popular audio tour.  You’ll walk the corridors vividly reliving the immigrant experience as if you were a “new arrival.”
If an in-person trip is not on your horizon any time soon, don’t fret.  More than 1,700 first-hand life story audio recordings of Ellis Island immigrants are now available online for the first time free at Ancestry.com.
“As immigrants created new lives in the U.S., the stories of their homelands and their remarkable journeys to America were often lost,” said Christopher Tracy, senior vice president of global content for Ancestry.com.  “We are thrilled to offer people the opportunity to hear the voices of their ancestors sharing stories of their lives.”
The oral histories were originally recorded by the National Park Service starting in the 1970s, and contain first-hand accounts recalling the lives these immigrants left behind, their reasons for leaving and their incredible and often-trying journeys to America.  In addition to oral histories from immigrants, the collection also includes recordings from former Ellis Island/Statue of Liberty workers, and military personnel who were stationed on Ellis Island.
“To our family it is important that we in the U.S. know the origin of the people who came to this country, settled here and made it what it is today. It makes us very proud to know that our mother was part of this,” said Yvonne Rumac, daughter of oral history participant Estelle Belford, who immigrated to the United States from Romania via Ellis Island in 1905.
And if you are interested in learning more about your own immigrant ancestors here are some resources for you:
Ancestry boasts the world’s largest online collection of U.S. immigration records. www.ancestry.com/immigration.
(Comprised of more than 170 million records, the Ancestry.com U.S. Immigration Collection includes lists of passengers who immigrated by ship to America between 1820 and 1960, including those who came through Ellis Island; more than 7 million citizenship and naturalization records; border crossings, passport applications and more to help reconstruct our ancestors’ journeys and early lives in America. Ancestry.com has also added nearly 2 million new U.S. naturalization record indexes.)
The FamilySearch Wiki
A brain trust of some of the best researchers out there, the FamilySearch Wiki allows you to search on keywords to learn more about a vast array of topics including immigration.  Much of the information comes from the experts who work at the Family History Library in Salt Lake City.  You get the benefit of their immigration research knowledge from the comfort of your own home.
https://wiki.familysearch.org/en/Main_Page  Then search for the records themselves on the free FamilySearch Beta website
http://beta.familysearch.org/
Stephen P. Morse’s One Step Pages
http://stevemorse.org/
If your search at the EllisIsland.org website doesn’t retrieve your ancestors head on over to Stephen Morse’s One Step Pages.  There you will find  dozens of links to search resources including the Ellis Island Gold Form for arrivals between 1892 and 1924.  Even the folks at Ellis Island refer researchers to Morse’s site.  Listen to my interview with Stephen Morse on Genealogy Gems Podcast episode #10
http://www.genealogygemspodcast.com/genealogy_gems_episode_10
Family History: Genealogy Made Easy Podcast Episodes on Immigration and Naturalizaton
Genealogist Steve Danko covers immigration and naturalization in depth in episodes 29, 30, and 31.  Steve even offers up some little known tips about deciphering some of the crytic notes researchers often find on passenger lists.
29 – http://personallifemedia.com/podcasts/415-family-history/episodes/45846-immigration-naturalization-part
30 – http://personallifemedia.com/podcasts/415-family-history/episodes/46854-immigration-naturalization-part
31 – http://personallifemedia.com/podcasts/415-family-history/episodes/47994-immigration-naturalization-part
Page 269 of 271« First«...102030...267268269270271»