Show Notes: Learn how to resolve conflicting evidence in your ancestors’ birth dates. 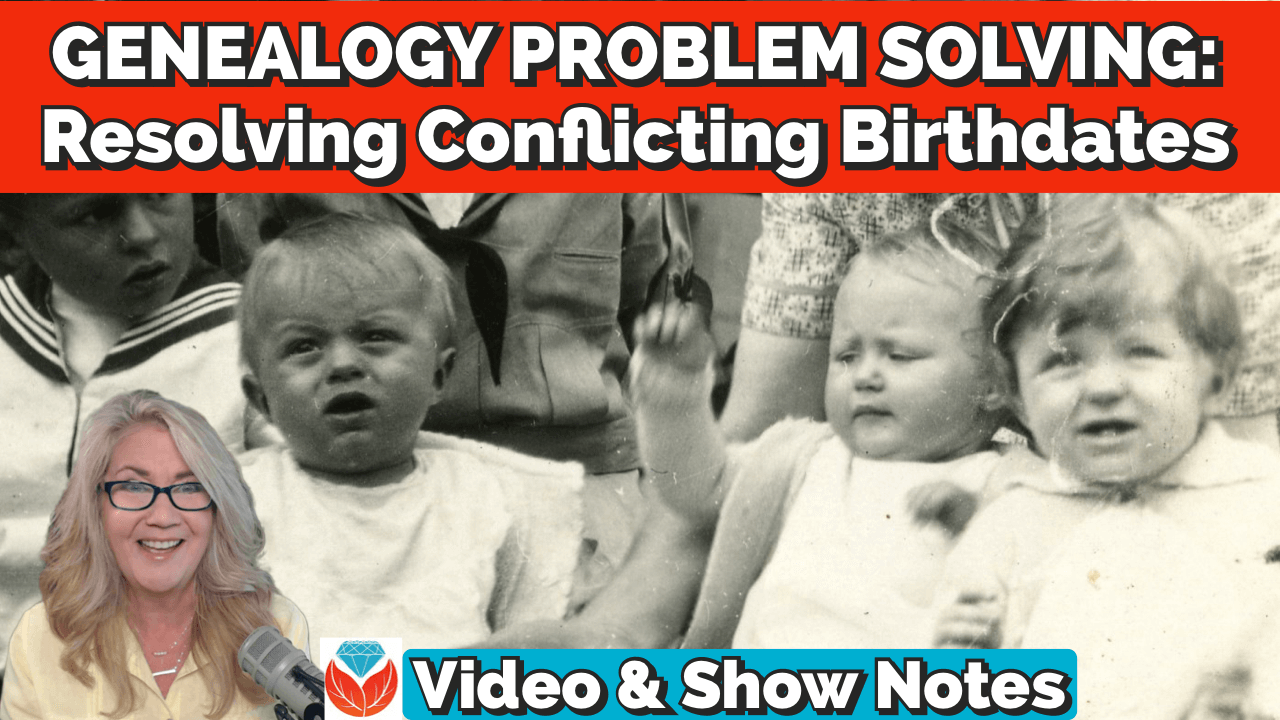 In this Article and Video:

Reasons for Birthdate Discrepancies in Genealogy

5 Questions You Should Ask About Conflicting Birthdates

Have you ever been frustrated by finding conflicting birth dates for your ancestor? The article called Birthday Wishes appears in the July/August 2020 issue of Family Tree Magazine tackles this challenge. The article’s author, professional genealogist Lindsay Harner is here to share five questions that you should ask yourself when you are comparing birth dates across a variety of genealogical records. These questions will help you get a little closer to the truth.

Reasons for Birthdate Discrepancies in Genealogy

Lisa: What are some of the possible reasons that we might come across birthdate discrepancies when we’re looking at a variety of different genealogical records?

(01:08) Lindsay: We’re talking about vital records, birth, marriage and death records.  I think birth records tend to be a little different sometimes, because marriage records would be recorded by churches and in civil records for many, many years and often reported in the local newspaper. Death dates are often carved on headstones. But with the birthdate, nobody can remember their own birth date, right? So, in the days before documentation, a lot of times people had to rely on what they were told by maybe a parent or a relative in terms of what their actual birth date was.

5 Questions You Should Ask about Conflicting Birthdates

Let’s jump into your five questions, because I think they will help us find the truth. What is the first thing that we should ask ourselves when we’re seeing a discrepancy?

Question #1: When was the birthdate record created?

(02:16) Lindsay: The first question you should ask yourself is, when was the record created?

Records tend to be more reliable the closer they were created to the actual event. People tend to remember events better when they’re fresher in their minds. We tend to remember things better that happened last week than, say, 10 years ago.

Question #2: Who was the source of the birthdate?

(02:52) The next thing you’re going to want to ask is who was the source of the birth information? Was it someone who could have been present at the birth?  They’re going to be the most reliable sources of information. People such as a parent, grandparent, aunt or uncle, maybe an older sibling who would have been old enough to remember, an attending physician or midwife if you’re lucky enough to find a record from one of them. People like that would be much more reliable than, say, the person’s child who of course, couldn’t have been present at the birth.

Lisa: A death certificate is a good example. It will often tell the birthdate of the person who died. However, you then look at the informant, and you realize that guy certainly wasn’t there when the person was born and certainly heard about it second or third hand. So that’s what you’re talking about, deciding how much weight to give it?

Question #3: Can the birthdate be corroborated?

(04:00) The next question you’re going to want to ask is whether or not the birth date can be corroborated with other records. For example, if you have three records that report one birthday, and then you find another record that gives a completely different birthday, chances are the record that differs from everything else is probably not accurate, if you can’t find anything else that matches it.

Lisa: So, you’re saying if one thing stands out as different while everything else seems to be lining up, then we give it less weight. That makes sense. And I imagine that there are some dates out there that just don’t make sense, right?

Question #4: Is the birthdate plausible?

(04:50) You’re going to want to take into consideration everything that you know about the person when you have conflicting information. Look at all of the records you have related to them in their immediate family. That should clue you in on whether or not a certain birthday is even plausible or makes sense.

For example, if someone is listed in the 1860 census, they couldn’t have been born in 1861 or later. Or if they had an older brother who was born in 1875 their birth date would have to be at least nine months after the older sibling’s birthday.

Lisa: That sounds logical. When you’re in the heat of a research challenge, sometimes it’s easy to lose sight of those very simple discrepancies. What else should we be asking ourselves?

Question #5: Is the birthdate inaccurate on purpose?

(06:00) Lindsay: The last question that I recommend you ask yourself is, in this situation, is there a reason that the source would be dishonest? There are a lot of reasons why someone may have lied about their age. I’m sure most of us have heard about boys claiming to be older than they actually were in order to be eligible for military service.

Some people may have lied just for the sake of appearances. For example, I can think of an instance in my own family tree where I have a female ancestor who was about seven or eight years older than her husband. Once they were married, all of a sudden her birth year in census records became much later because she apparently didn’t want people to know she was so much older than her husband, or they just assumed that they were closer in age. So that’s one reason why someone could be dishonest.

Another possible reason for dishonesty could be that they had a financial incentive. My grandfather got his driver’s license when he was 15. He lied about his age for many years. His driver’s license never had the right age on it.

There are all sorts of reasons that people lie. So, you’ll just want to ask yourself, is there a reason? Did they stand to gain something from being dishonest?

Lisa: That’s a very good point. It makes me think back to my first job. If anybody ever finds my first job application, they will find a bit of a discrepancy on the age because I was really anxious to get to work. I was 15, and you had to be 16 to work. But I don’t do that anymore!

When we’re looking at these kinds of records, and you were talking about finding additional records to corroborate what we’re finding, what are some of the birth records substitutes that we could be looking for?

(08:15) Lindsay: Yes, fortunately, even in the years before state issued birth certificates, there are a lot of other sources that we can turn to that would give a birth date. Probably the best sources out there would be a family Bible or a baptismal record.  Chances are, they were created very close to the birth, or not very long after.

If your ancestor lost a parent at a young age, there may be guardianship records that would record their birth date.

If your ancestor served in the military, there could be various military records, enlistment records, pension records, or World War One World War Two draft registration cards that would record birth dates. They’re both available on Ancestry.

Older headstones are another source. They might not record a birth date, but I’ve seen many where they’ll record the death date and give the person’s very specific age in years, days and months. And so even if it doesn’t record the actual birth date, you can calculate it.

There are also death certificates and obituaries. There are also many records that we record a person’s age at the time that the record was created. Census records are of course a big one, and marriage records. You can use those to help calculate a range of when their birth may have occurred.

Lisa: As you list those records, I think of so many others too, like a passport application. I know I’ve seen them on Ancestry.com. There are lots of different opportunities to come up with some additional records to help determine the true birthdate.

In your article in Family Tree Magazine, you provided a great case study. I always think it’s so interesting when we take the theory behind what we’re doing and really apply it to something. Tell us about the case study dealing with these discrepancies in birth records.

(10:41) Lindsay: I came across this situation a few times in my research, but probably the most interesting and perplexing case is the one I shared in the article. It’s about my great, great, grandfather, named Thomas H. Higgins. He was born in Pennsylvania in the 1850s which was many any years before Pennsylvania started issuing birth certificates. Pennsylvania didn’t start until 1906.

Fortunately, his life is very well documented. I have many records that record a birth date for him. Unfortunately, very few of these records match. I actually found six different birth dates for him. I went through each record and evaluated it based on the questions that we just talked about.

However, as I continued to research him, I started to find many records that did not match that birthday and that made me start to question the accuracy of the 1856 birth date. I started to find quite a few records that said that he was born more than a year earlier in August 1855. Initially, I didn’t put much stock into some of these records, because quite often he was the source of the information. He actually was not a very reliable source because I also know that he had a history of lying about his age!

As I mentioned previously, quite often, young boys would claim to be older to enlist in the military. But in his case, he actually claimed to be about 15 or 16 years younger than he was in order to be able to enlist in the military. He was in his 60s during World War I, and he claimed to be in his 40s in order to enlist. So, I was skeptical of any record where he was the source. I wasn’t sure whether or not to believe him.

STRATEGY: Collect as many birth records as possible

Then I started to find other records. I found an additional birthdate buried in his mother’s Civil War pension application. I then found a baptismal record. They both corroborated the August 1855 birthdate. And, of course, if he was baptized in March of 1856, he couldn’t have been born in December 1856.

What was the reason for these multiple birthdates? Well, it turns out his parents weren’t married until April 1855, about four months before the August 1855 birth date. So, I believe that he was actually born in August 1855 and his mother fibbed about that in order to hide the fact that he was only born a few months after their marriage.

Lisa: That’s a great example of a reason why somebody might fudge things a little bit.

STRATEGY: Chart out the conflicting birthdates and sources.

I also really liked in the article how you shared a chart, almost like a timeline, but really charted out all the different items. It really helps you see the whole picture of all these conflicting dates, where they’re coming from, when they were created, all those things that you mentioned so that we can try to make a final determination.

The article is called Birthday wishes and it appears in the July / August 2022 issue of Family Tree Magazine.

About Author and Genealogist Lindsey Harner

Where can we learn more about what you’re up to these days?

(15:55) Lindsay: I focus on Pennsylvania and New York research primarily in the 19th and 20th centuries. I’m always busy working on that. And you can find me on my website Lindsay’s Histories. I also have a blog there that you can check out and read more about my research.