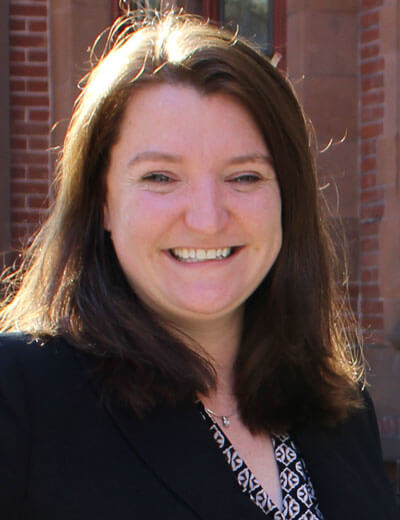 In this episode we head back to 17th century New England with Lindsay Fulton of  the New England Historic Genealogical Society and AmericanAncestors.org

Lindsay Fulton is with American Ancestors and New England Historic Genealogical Society where leads the Research and Library Services team as Vice President. She is a frequent contributor to the NEHGS blog and was featured in the Emmy-Winning Program: Finding your Roots: The Seedlings, a web series inspired by the popular PBS series “Finding Your Roots.”

Watch the video and follow along with the show notes below as we cover how to get started researching our early American ancestors. Lindsay will also provide her top genealogical resources.

Getting Started with Colonial-Era Research

During this period of American history, New England includes:

To get started in Colonial-Era genealogical research, Lindsay says the first thing you need to do is put your ancestors into an historical context:

Significant dates and events at this time include:

Turn to the book The Expansion of New England, The spread of New England Settlement and Institutions to the Mississippi Rover 1620-1865 by L. K. Mathews. Published in 1909 this important book includes 30 to 40 historical maps.

Book: Genealogists Handbook for New England Research, 5th Edition. Edited by Michael J. Leclerc. This book includes important detailed information on towns, cities, and states. It will help you determine where to look for records during a given timeframe.

Finding Aids provide a comprehensive list of all the available records for a person / family.

The first place to look for people settling in New England prior to 1700: New England Marriages Prior to 1700 by Clarence Almon Torrey. This book includes scholarship prior to 1962. Learn more about it here.

The next place to look: Founders of Early American Families by Meredith Colkert. Scholarship goes a little further than 1962 and ventures beyond New England. This book covers 1607-1657.

The next place to look: New Englanders in the 1600s, A Guide to Genealogical Research Published Between 1980 and 2010 by Martin E. Hollick. At the beginning of the book there is a key to all of the original sources. For example, TAG refers to The American Genealogist.

From Lindsay: “The thing about 17th century research, like a said at the beginning, the most studied people on the planet. So, don’t reinvent the wheel, don’t drive yourself crazy trying to find all of this information on your own. You have to stand on the shoulders of those who have come before you. There are all of these people who have done all this research before. Please look at first. Always look at with a little bit of hesitation because there’s always possibilities that mistakes were made. But at least take a peek at what’s already been done first!”

The first example that Lindsay provided of a study project for early American ancestors is the Great Migration Study Project (searchable online database at AmericanAncestors.org)

Those who are included in the study project:

There are millions of compiled genealogies available for early American ancestors. Lindsay discussed three publications (available in book form) that are state specific: 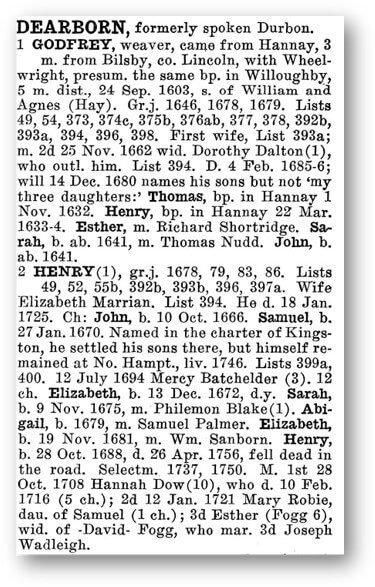 These can be searched on AmericanAncestors.org: Database Search > Select the Category Journals and Periodicals, and then scroll through all of the available items. They are fully searchable. You will be able to see the actual record. You can download and print the items.

The Silver books and the Pink books done by the General Society of Mayflower Descendants. It’s looking at those passengers with known descendants. These are only available currently in book form. If you are interested in applying to the Mayflower Society, they accept these as original records. You can cite the pages. (Learn more about Mayflower related resources at American Ancestors.)

If you click Mayflower Families Fifth Generation Descendants, 1700-1880, it will take you to a search page where you can search by names and years, or search by volumes. It will bring up all of the available records.

Usually you’ll be looking at the town level. This is why you must know where your ancestors were living, and what the place was called at that time, and what the borders were.

Be sure to check out 17th-Century New England Research page at the American Ancestors website for more New England tips, tricks and strategies.

You can schedule a consultation with an expert genealogist on staff at NEHGS.
Length: 30 minutes to 2 hours
Conducted over Zoom or over the phone. A recording is provided.
Contact: research@nehgs.org
Fee: $85 (members) or $105 (non-member)

Answers to Your Live Chat Questions About Colonial American Genealogy

One of the advantages of tuning into the live broadcast of each Elevenses with Lisa show is participating in the Live Chat and asking your questions.

From Susan W: Is there a source for Rhode Island? (I’m not sure if she was thinking about one particular resource you mentioned or generally. Perhaps she just needs a RI finding aid?)
From Lindsay: Yes! American Ancestors-NEHGS has a fantastic guide to Rhode Island research, which you can access with a free guest membership here.

From Cindy A: What percentage of the items you showed would require a paid membership?
From Lindsay: The majority of the databases shown are included as a benefit of membership with American Ancestors-NEHGS, but if you are interested in Colonial American genealogy, you should consider membership. We have hundreds of databases that will help you to discover more about your 17th and 18th Century ancestry. You can learn more about these databases (and books in the library) with a free guest membership.

From Kathy M: Excellent. Can you comment on both land inheritance (i.e. did it follow English primogeniture) and on best sources for finding 1600 female ancestors’ family names.
From Lindsay: Alicia Crane Williams wrote a blog post about this entitled, Probate records: Part One, where she states, “for the most part, a testator could leave anything to anyone, unless they were dealing with colonies such as Virginia that followed the laws of primogeniture where all real estate was left to the oldest son. This did not apply in New England, although it was customary to follow the legal model of giving a double share to the oldest son. A legitimate heir who was left out of a will could potentially contest it in court, thus the bequests of one pound or one dollar to cover any claim that someone had been accidentally forgotten.” For more information about land inheritance in New England (and the U.S.), you should examine Wade Hone’s Land & Property Research in the United States. It is an excellent deep-dive into land records. As for female ancestors’ family names in the 1600s, I would recommend examining Torrey’s New England Marriages and Hollick’s New Englanders in the 1600s. Those are the two best places to start your search for the ladies in your family (I covered these in the episode too).

From Louann H: Suggestions for time period 1660-1776?
From Lindsay: Many of the resources discussed during the presentation covered the 17th century, and would be your best bet for resources for 1660-1700. You can learn more about these databases (and books in the library) with a free guest membership. After 1700, there are few compiled resources similar to the Great Migration Study Project; however, you could start with a search of the American Ancestors-NEHGS Library catalog. We have thousands of published genealogies that may cover your family history in the first half of the 18th Century.

From Jane C: This has been wonderful, doing Mayflower research. What are Notarial Records?
From Lindsay: Notarial records are a private agreement written by a notary in the form of a contract. Some of the most common ones are marriage contracts, wills, estate inventories, leases, and sales contracts. While they were not common record keeping practices in New England and New York, notarial records were plentiful in Quebec. You can learn more about them by watching our free webinar called Navigating Notarial Records in Quebec.

News You Can Use: Google Photos Update

Google Photos is currently the home of more than 4 trillion photos and videos of users around the world. According to Google, 29 billion new photos and videos are uploaded every week. They just announced that starting June 1, 20201 “all new photos and videos backed up in High Quality will count toward the free 15 GB of storage that comes with your Google account or any additional storage you may have purchased, the same way other Google services like Google Drive and Gmail already do.” 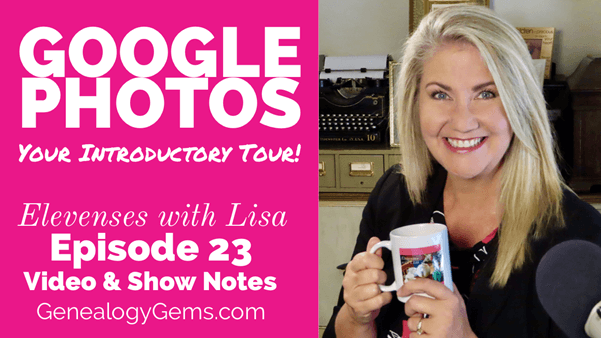 All “High Quality” content uploaded before June 1, 2021 is exempt from counting against your storage. On that date they plan to launch a new storage management tool that they say will help you easily identify items you’re currently storing that you may want to remove if they are low quality or otherwise unwanted. This will help you reduce the amount of storage you use.

If you don’t want to pay for additional storage, here are some tips:

Get My Free Genealogy Gems Weekly Email Newsletter
The newsletter is your guide to upcoming shows, articles, videos, podcasts and new Premium content.