Viewer Voices: Stories of Doll Houses, Risk-Taking, and Women Getting the Vote

Live show air date: September 17, 2020
Join me for Elevenses with Lisa, the online video series where we take a break, visit and learn about genealogy and family history.

In this week’s episode we’re celebrating both your unique genealogy path, and the one that we have taken together as a community. The Elevenses with Lisa show has really grown into a vibrant, caring family. Whether it’s something I’m teaching, or a conversation happening in the live chat, there’s always something new to learn!

So, I invite you to sit back and relax with your favorite cup of tea while I share some of your stories, answer some questions, and pretty much talk about whatever tickles our fancy. Click below to watch the video, and follow along here on this show notes page.

Cathy Gallaghers’s question: “I, like so many others, really enjoy listening to your podcasts and Elevenses!! I have learned a lot! I am having trouble with one concept.  I have a “new cousin” that I learned about through DNA. She is a great detective in finding people, places and information.

I want to have our family tree on Google docs so that we can share the family tree and we can start organizing all of our information. What I’m having trouble with is how do you put the tree in google docs? I cannot copy and paste from Ancestry.

I just cannot see HOW to make this large tree in google docs AND have a place to have the documentation…I really want to work with this cousin.”

My Answer: I think having everything in your database and saving the database to Google Drive is the way to go. If you don’t have a software database, I encourage you to get one that synchronizes with Ancestry.

Recommended Viewing: Premium Video How to Take Control of and Preserve Your Family Tree Information. (Click here to learn more about joining us as a Premium Member.)
I use and recommend BackBlaze cloud backup – learn more here. (Using this link supports this free show – thank you!)

Google Docs are contained in Google Drive, but Google Drive also can have files that you have uploaded from other sources, like videos, and photos. So, there’s really no point in recreating things in Google Docs. Google Drive gives you a place to store everything as well as collaborate.

As you’ll recall in Episode 22 I showed you ways to use Google Earth to research your ancestors’ neighborhood. Cathy shared how she used what she learned from that episode in her research. She writes,

“BTW – I downloaded Google Earth Pro and have had a blast putting people on the map. My grandfather wrote a book called, “Passeggiata” the story of his life. He talks about a time when he went to New Haven CT and he wrote down each street he turned down and which direction he went in.  I went to google earth and local maps but could NOT find this one street he talked about. When I got the map from David Rumsey and overlayed it – there was the street he talked about – JUST AS HE SAID. I was so excited!”

In episode 23 I gave you an introductory tour of Google Photos, and I shared how Google Photos uses facial recognition to find people in your photos. 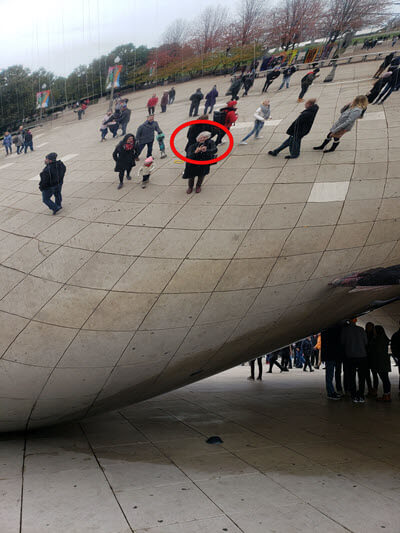 The First Woman to Vote in Florida

A couple of weeks ago on August 26, 2020 here in the United States we celebrated the 100 year anniversary of women securing the right to vote.

The House of Representatives passed the amendment on May 21, 1919. Two weeks later, the Senate did as well. The amendment was adopted when Tennessee became the 36th state to ratify on August 18, 1920. The 19th Amendment was formally adopted into the U.S. Constitution by proclamation of Secretary of State Bainbridge Colby on August 26, 1920.

It was a long road but finally women had the right to vote, and Elevenses with Lisa viewer Melanie Barton’s grandmother wasted no time doing so in 1920.

Melanie sent me her story, and I asked her to record it so I could turn it into a little video to share with all of you which you will see in this episode. (20:30 mark in the video.) 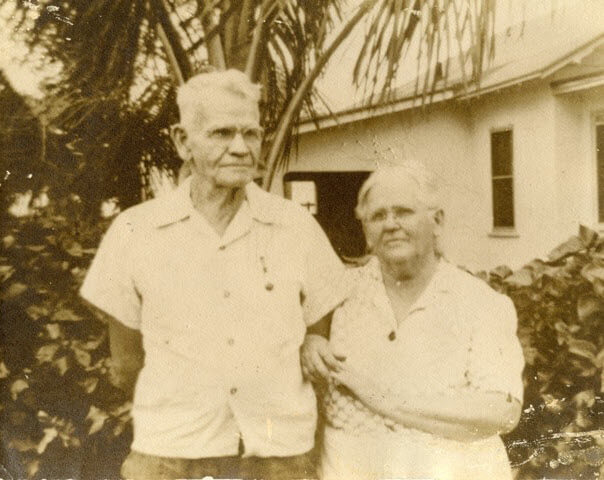 Epilogue: Shortly after voting Fay happily remarried. Here she is with her husband W.C. Bridges in Miami, FL.

Pamela Fane left a comment on Elevenses with Lisa Episode 20 on House History Research. She shared two wonderful stories about how the personal touch pays off when it comes to delving into house histories.

He was not overly friendly and asked me who that might be and when. I told him Thomas Fane lived there in 1761. 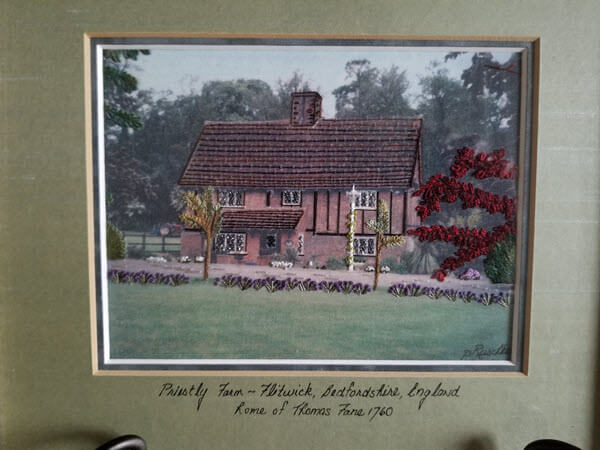 Oh, well then, he said, warming to his subject; when you finish with the front, go ’round to the back and make sure you get a photo of the wing that juts from the house because he built that and the man turned back to his tractor.  Now there is a man who knows the history of his house.

One of the pictures I took of the front of the house I turned into a stitchery which sits on my hall table.”

In her second story her husband got in on the act.

“On another trip I was leaning over a fence gawking at another ancestor’s property, also in Bedfordshire, England.

My husband was encouraging me to knock on the door.  I didn’t want to bother anyone; a photo would be good enough. Well, not good enough for my husband so he knocked on the door.

We were invited in and shown pages and pages of historical papers about the house.  The owners were very interested in the history of their house and wanted to know about the people who lived there in former times.  I was able to send them all sorts of information covering the 300 years my ancestors lived in the house.

That knock on the door was a win/win for both of us.” 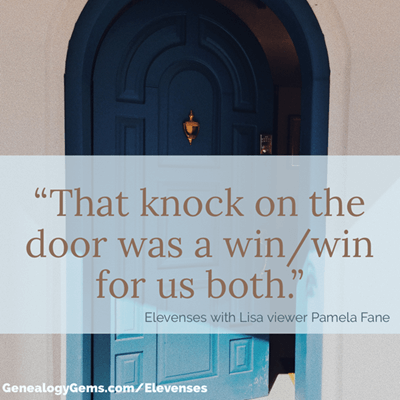 An Ancestral Home in Miniature

After watch the episodes on house history and Irish research, Anne was keen to share a very special house that once belonged to her Irish ancestors. She emailed me a story she had written for her new blog Annecestreeforest which she started in January 2020. She also included a PowerPoint presentation with photos.

As I reviewed it I could see the video that it should be in my mind. I asked Anne to record a bit of her story and a descriptive tour which she happily did. The next day I put it all together as a video.

Anne wrote: “It took my grandfather (Alan R Cassidy) a full year, working every day, to build the replica. During that time, unbeknownst to me, he was diagnosed with cancer, and died shortly after giving me the house.

He was a loving person, a strong believer in family heritage, a proud Canadian, honoured to serve as a Chief Petty Officer in our navy, and as a carpenter thereafter for the government.

The highest praise he could give someone was “he is a good man” and he was definitely that.

William and Jane’s descendants include nurses, pilots, lawyers, carpenters, farmers, and an Order of Canada honoree. Their legacy touches us all and is remembered each time I look at the little house.”

Let’s wrap up this episode with something really fun that’s not genealogy but is on topic because this show is called Elevenses with Lisa. The name comes from the fact that the traditional morning teatime / break time is 11:00.

Over the last 25 weeks I’ve shared my cups with you, and as you’ll remember Margaret shared her mother’s mix and match collection of teacups that it turned out were traditionally given at bridal showers.

Well, a few days ago Lindell Johnson sent me a little video she found about some exceptionally beautiful and innovative cups and saucers that bring a fresh perspective to driving tea, and art.

Variations of these cups and saucers are available online here: https://tinyurl.com/E-mirrorcups

Like the mirror cups and saucers, I hope that Elevenses with Lisa has brought you a fresh perspective of your genealogy and family history.

If you’re enjoying the show, you can help others benefit from it too by leaving a comment below. Your comments…

By leaving a comment (what you enjoyed, questions you have or what you’d like to see in the future) below this video after the show’s over or at the bottom of the show notes page if you’re watching on my Genealogy Gems website.