Live show air date: August 20, 2020
Join me for Elevenses with Lisa, the online video series where we take a break, visit and learn about genealogy and family history.

Please note: As is often the case with technology, sometimes things just don’t work like you think they will. As it turns out, items displayed clearly on my computer in Google Earth were not displaying in the live stream or captured on the video. Don’t worry, if you ever want to create a digital movie of your Google Earth maps, Google Earth has a video recording feature built in so this won’t happen. However, I did everything in this episode live and in real-time through live stream which apparently was at the root of the problem. Keep reading, because I have all the notes for you on what we covered, as well as screen shot images of everything that did not appear on the screen in the video!

It’s a beautiful day in the neighborhood, and we are going to have some fun exploring one of my ancestors’ neighborhoods. Along the way I think you’ll pick up some interesting ideas on how you can explore your ancestors’ lives in a deeper way by getting to know their neighbors.

While you may not find it worthwhile to create a project like this for every family in your family tree, it could prove very helpful for:

We see our ancestors’ neighborhoods when we review census records. But have you ever wondered what was life really like in their neighborhood? This project can answer questions such as:

The genealogy project I’m creating in Google Earth in this video is the neighborhood of my great grandparents who lived in San Francisco from 1900-1912. Now, don’t be discouraged if your ancestors were farmers. Remember, everyone has neighbors and a community. Every community has records.

All the techniques covered in this video are covered in detail in my book The Genealogist’s Google Toolbox available here.

The Census: The 1910 U.S. Federal Census tells us that they lived at 288 Connecticut Street, San Francisco, CA.

Most of their close neighbors, don’t appear on the same page with them. Instead, the neighbors of Connecticut Street appear on the previous page. Always look at the pages before and after the page where you find your ancestor. Often you will find other relatives, close friends, and other people with connections to your family.

For this project we will need the free Google Earth Pro software. Although Google Earth is available in a Web version and an app, these do not include all of the same tools. I always use the software. If you already have Google Earth, check to see if you have the most recent version.

You will also need an a good internet connection to operate Google Earth.

Follow along with the video with the notes below.

In the Layers panel, turn on Rumsey Historical Maps in the Gallery by clicking to check the box. Gold medallion icons will appear on the map. Hover your mouse over the icons to see the title and date. Click the select a map. In the pop-up box, click the thumbnail image of the historic map to automatically overlay it.

Videos before and after the great earthquake of 1906 (See Images) Add videos from YouTube to placemarks by copying the Share embed code and pasting it into the Description area of the placemark. 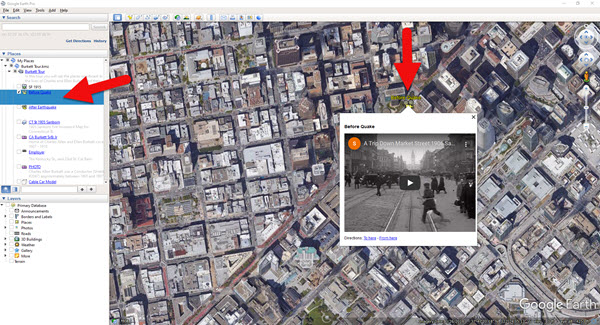 Click the box to activate items like the custom map overlay I created using the 1905 Sanborn Fire Insurance Map of Connecticut Street. Learn how to create map overlays in episode 6 of my Google Earth for Genealogy video tutorial series. 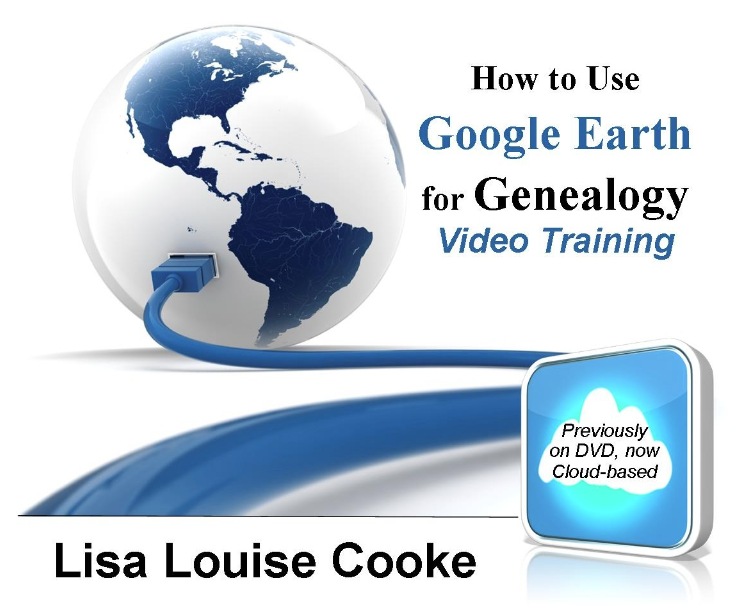 Search for addresses like 288 Connecticut, San Francisco in the search box in the upper right corner of Google Earth.

Set a placemark for a home by clicking the Placemark icon (yellow pushpin) in the toolbar the top of the screen.

Use Street View to Get a Closer Look

Visit the street up close and person with Street View. Click on the Street View icon in the upper right corner, drag it over to the map, and drop it on the blue line.

Photos can be embedded into placemarks, such as the photo of my Grandpa and his father (See Image) 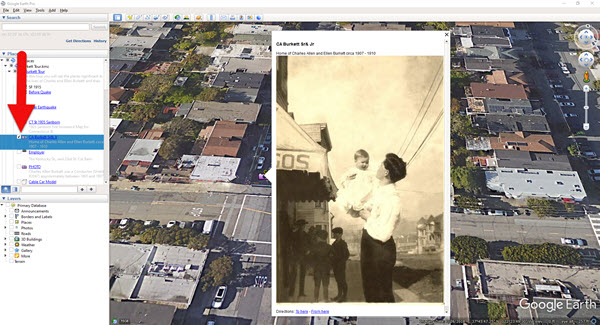 Photo of my grandather being held by his father displayed in a Google Earth placemark.

and the photo of my Great Grandfather next to his streetcar. (See Image) 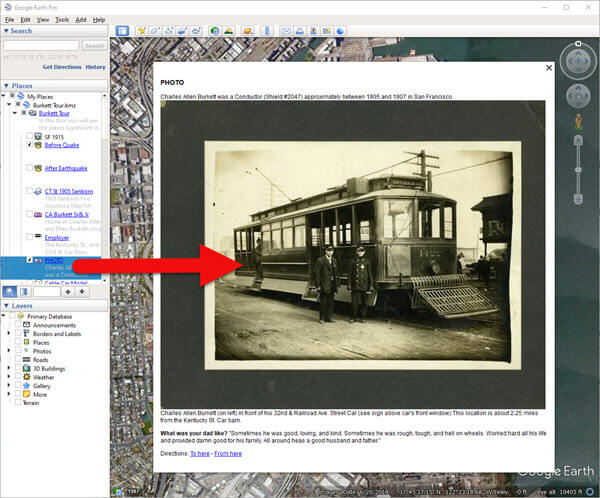 Search for each family address and mark the locations with placemarks.

3D models (like the streetcar I showed) are created by other Google Earth users and are available online. The HTML code is pasted into a placemark. (You can learn more about this in episode 13 of my Google Earth for Genealogy video tutorial series.

Search for the addresses of neighbors you find in the census and other records. 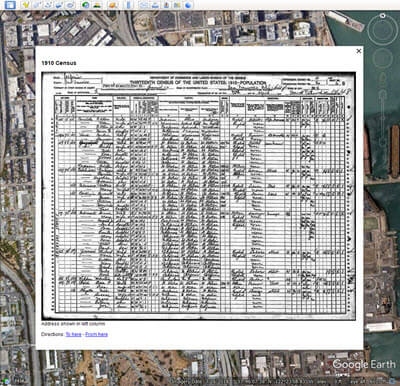 The census image displayed in a Google Earth placemark.

In this case I searched for the address I found for Bertin & Lenora Hall (293 Connecticut.) Bertin was a locomotive engineer, born in the United State, and they were renting their home.)

Add a Folder to the Google Earth Places Panel

You can add folders to help keep your items organized in the Places panel by right-clicking on MyPlaces, and selecting Add > New Folder. Name the folder as desired, and then drag and drop it to the desired location in the Places

Use Historical Maps from a Variety of Years

Comparing the locations with maps from various years helps you see the evolution of the neighborhood. Notice that some maps don’t line up exactly with the modern map. This is due to inaccuracies often found in old maps.

We can learn more about the makeup of the neighborhood by designating their country of origin. Some neighborhoods may be predominately filled with many people from the same country or even village. Others, like my Great Grandfather’s neighborhood, were quite diverse:

Use the Opacity slider to make a map overlay being displayed more transparent. Start by clicking the space just below the map in the Places panel in order to select it. Then click the Opacity button at the bottom of the Places Slide the slider to change the transparency.

Add Details to the Placemark Description

I typed information into the Description area of my placemarks such as their occupation, fully street address and country of origin. Typically the first two lines of text will be visible in the Places Click the placemark to open and read or add all of the information desired.

Explore old maps, city directories, county histories and other resources to locate possible places of employment. You can then mark each location with a placemark. I used the “wrench” icon to represent work.

Where did David Rutherford work? I searched for “Cannery San Francisco” and sure enough Google Earth found a site in the northern part of the city.

Let’s not forget the children – I marked the school attended by my grandfather and a photo of him with his classmates. (See Image Below) 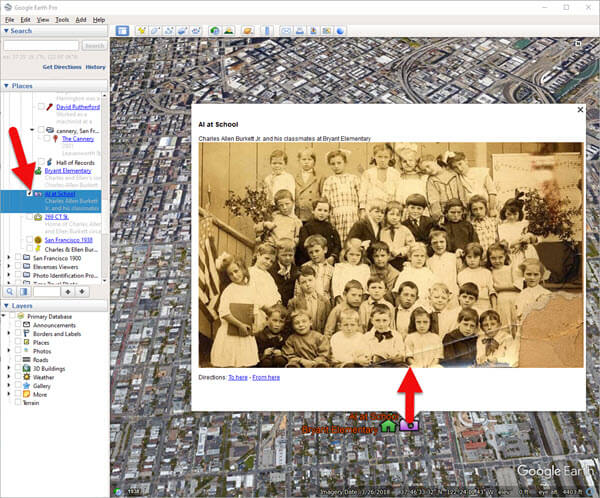 The Future of the Neighborhood

The neighborhood continued to grow well after they left as revealed by another David Rumsey historic map from 1938 found in the Layers Panel > Gallery.

Resources for this Episode