Here’s the latest news from MyHeritage:

As many genealogists already know, MyHeritage is the website of choice for international genealogy, particularly in Europe. It is also extremely useful for U.S. genealogists whose ancestors arrived in the U.S. from other countries. This strength comes from the fact that MyHeritage is translated into 42 languages and is the most popular genealogy website in most non-English speaking countries, as well as having millions of international users who built family trees found only on MyHeritage, exclusive global record collections, and unique technology for overcoming language barriers.

We are working constantly to improve the technologies on MyHeritage even further and today, we’re delighted to announce a significant innovation: our Global Name Translation Technology™ has been extended to apply to Record Matches as well! 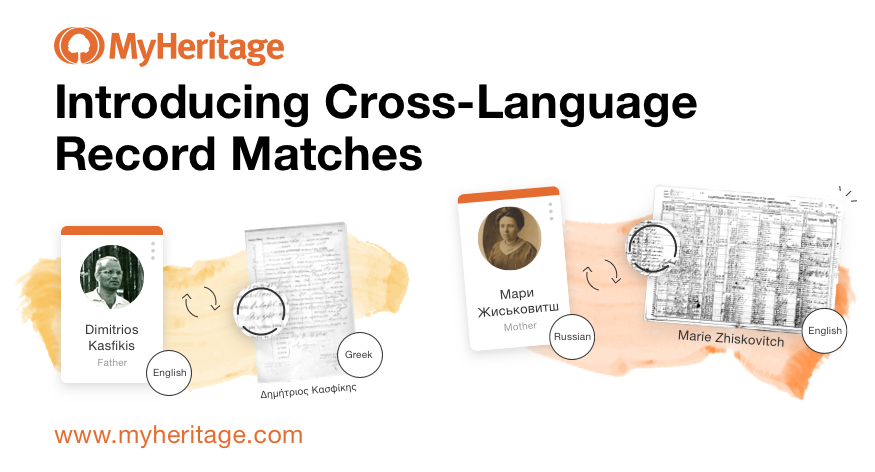 Individuals researching their heritage often face a language barrier when researching their ancestors who lived in another country. MyHeritage pioneered Global Name Translation Technology™ to help users overcome this barrier, by automatically translating names between languages. This unique capability, originally conceived by MyHeritage’s Founder and CEO, allows users to locate records that mention their ancestors in different and often unexpected languages (as well as in synonyms in each language). Initially, this was available in our search engine, SuperSearch™, and has now been extended to automatic Record Matches as well.

For example, if you search for an ancestor you know as Alexander, the algorithm may uncover a Spanish record where his name is listed as Alejandro (a Spanish version of Alexander), or a Russian record with the name written Александр in Cyrillic characters (the Russian way to write Alexander), or its common Russian nickname Саша (Sasha).

With this new addition, translated Record Matches are now calculated on an ongoing basis, and you’ll receive matches with historical records and family tree profiles in other languages.

When you view them, the names will be conveniently spelled out using your own alphabet. You may already have noticed some records from other languages appearing in your matches.

This feature will help you easily locate records that would otherwise have been very difficult for you to find.

This unique technology is only available on MyHeritage and works hand in hand with our huge database of international records.