With so many new records coming online, I’m going to focus today on collections that are new, or have had a substantial update. These records are from around the world, and offer excellent opportunities to expand your genealogical research. 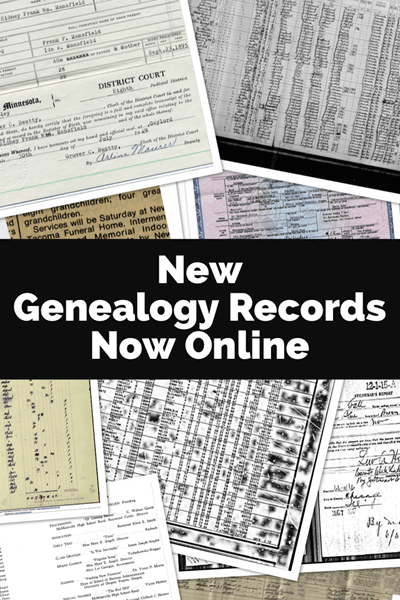 Keep reading here at Genealogy Gems for all the latest new records.

New indexed record collections offer new hope for genealogists yearning to bust a brick wall in their family tree. FamilySearch has recently launched several noteworthy new genealogical record collections. Some have substantial amounts of new records and some are just getting started. As always, they are free to access with an account. Here’s the latest:

MyHeritage, the leading global service for discovering your past and empowering your future, announced today the publication of three important Greek record collections:

This release constitutes the first substantial set of Greek record collections available on MyHeritage. All three collections have been indexed by MyHeritage and for the first time are now searchable in English, as well as in Greek. The total size of MyHeritage’s historical record database is now 12.2 billion records. This release positions MyHeritage as an invaluable genealogy resource for family history enthusiasts who have Greek roots.

“As the cradle of western civilization and a crossroads of continents and cultures, Greece is becoming a gem among MyHeritage’s historical record collections. The records in these collections are rich in detail and have pan-European, Balkan, and Mediterranean significance. The communities documented were shaped by Greek, Italian, French, and Russian influences, have been home to significant Catholic and Jewish communities, and represent some of the world’s most progressive systems of governance. These collections will prove valuable both to novice researchers and experienced genealogists,” said Russ Wilding, Chief Content Officer of MyHeritage.

The publication of these collections furthers MyHeritage’s commitment to providing new avenues for Greek family history research. In one of the company’s pro bono initiatives, MyHeritage Founder and CEO Gilad Japhet personally traced the descendants of a Jewish family that was hidden during World War II on the small island of Erikoussa, north of Corfu. The entire population of the island collectively gave refuge to the family, and saved it from death. His genealogical detective work, combined with MyHeritage’s extensive global database of historical records, culminated in recognition for the courageous people of Erikoussa, who were presented with the House of Life award by the Raoul Wallenberg Foundation. This was depicted in the books ‘When the Cypress Whispers’ and ‘Something Beautiful Happened’ by Yvette Manessis Corporon, whose grandmother was among those who saved the Jewish family on Erikoussa.

Japhet utilized his hands-on experience in Greek research to develop the enhanced method by which MyHeritage now handles Greek surnames in the new collections. In Greece, a woman’s last name is the genitive form of her father’s surname, or when she marries, of her husband’s surname. The new Greek collections on MyHeritage have been made gender-agnostic so that searches and matches will work to the fullest extent. For example, a search for the Jewish surname “Velleli” in the new collections on MyHeritage will also locate people named “Vellelis”. It is also possible to find these surnames by searching for “Belleli”, because the Greek letter beta is pronounced like the English letter V, but in some countries this distinction has been lost and Greek surnames are sometimes pronounced with the letter B, the way they are written in modern English. MyHeritage’s Global Name Translation Technology further ensures that when searching on MyHeritage in other languages, such as Hebrew and Russian, the results will also include names in the new Greek collections. No other major genealogy company has these Greek record collections, nor such sophisticated algorithms customized for Greek genealogy research.

The Greece Electoral Rolls (1863–1924) consist of 1,006,594 records and provide nationwide coverage of males ages 21 and up who were eligible to vote. They list the voter’s given name, surname, father’s name, age, and occupation. Each record includes the individual’s name in Greek, and a Latinized transliteration of the name that follows the standard adopted by the Greek government. MyHeritage translated many of the occupations from Greek to English and expanded many given names, which are often abbreviated in the original records. This new collection includes scans of the original documents and is the most extensive index of Greek electoral rolls currently available anywhere.

The Corfu Vital Records (1841–1932) consist of 646,807 birth, marriage, and death records. The records were collected by the civil authorities in Corfu and document the life events of all residents of the island regardless of their ethnicity or religion. Birth records from this collection may contain the child’s given name and surname, birthdate and place of birth, name and age of both parents, and the given names of the child’s grandfathers. A marriage record from this collection may include the date of marriage, groom’s given name and surname, age, place of birth, residence, and his father’s name. Similar information is recorded about the bride and her father. Death records in this collection may include the name of the deceased, date of death, age at death, place of birth, residence, and parents’ names. The indexed collection of Corfu Vital Records includes scans of the original documents and is available exclusively on MyHeritage.

The Sparta Marriages collection (1835–1935) consists of 179,411 records which include images of the couple’s marriage license and their listing in the marriage register. The records in this collection list the full names of the bride and groom, the date of marriage, their fathers’ names, the birthplace of the bride and groom, and occasionally the names of witnesses to the marriage. The images in this collection were photographed, digitized, and indexed by MyHeritage from the original paper documents, in cooperation with the Metropolis of Monemvasia and Sparta.

The new collections are available on SuperSearch™, MyHeritage’s search engine. Searching the Greek record collections is free. A subscription is required to view the full records and to access Record Matches.  Click here to start a 14-day free trial at MyHeritage.

Oregon, State Births, 1842-1917
These birth certificates will typically include the following information:

U.S., Pennsylvania, Grand Army of the Republic Membership Records, 1865-1936
These records are made available through a partnership with FamilySearch. The describe the collection as follows: “Index and images of membership records of the Pennsylvania Department Grand Army of the Republic that cover from the years 1865-1936. An organization of Union army and navy veterans of the Civil War. The collection consists of registers, lists, minute, account and descriptive books of local post (chapters) The descriptive books include town of residence, military unit, date of enlistment,date of discharge, age and birthplace. The collection was acquired from the Pennsylvania State Archives.”
Click here to search the collection.

Finland, WWII Military Casualties, 1939-1945
In this collection you will find details on Finnish soldiers killed during World War II. From Ancestry: “From the start of the war until 1944, Finland was involved in battles with the Soviet Union and from 1944-1945, Nazi Germany. Altogether, nearly 95,000 Finnish soldiers were killed or declared missing in action.”  The National Archives of Finland created these indexes. They are in Finnish, reflecting the original source material.
Click here to search this collection

Germany, Military Killed in Action, 1939-1948
Notes about this collection from Ancestry: “This collection is searchable using the search form, which among other things allows you to search by Last Name, First Name, Birth Date, Birthplace, Date of Death and Place of Death. Under “Browse this collection,” you can select the Box Number Range and Box Number of the cards desired.”
Click here to search the collection.

New York, Executive Orders for Commutations, Pardons, Restorations, Clemency and Respites, 1845-1931
39,246 new records have been added to this collection of executive clemency application ledgers and correspondence.
According to Ancestry: “Each record includes the felon’s name, crime, date and county of conviction, sentence, and prison. Signatures on the records can include the governor, secretary of state, and/or deputy secretary of state.”
Click here to search the collection.

Tennessee, Death Records, 1908-1965
This is a significant update with 1,019,533 new records added covering 1959-1965. Be aware that, according to Ancestry, the forms used for reporting deaths 1908-1912 contain far less information than those used from 1914 forward. “No death records were recorded by the State of Tennessee in 1913 due to a change in the state law requiring vital records registration.”

More Genealogy for You

Join me for Elevenses with Lisa, the online video series where we take a break, visit and learn. In the episode below I share viewers’ family history displays, answer your questions about my genealogy organization method, and show you how I file my genealogy digital files. Click here for the episode show notes.