The Music Theory of Genealogy

Lessons in life often translate to lessons in genealogy. Here’s an example of how digging deeper can have you singing a happier research tune. 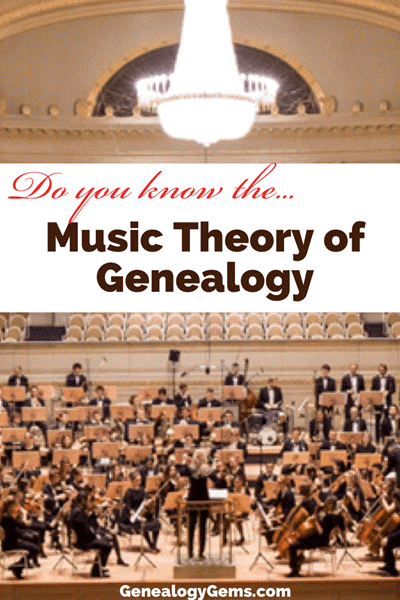 The Music of My Childhood

When I was a kid I had a million interests (and I still do.)

I loved art of all kinds – painting, drawing, and paper mache. I enjoyed baking and particularly candy-making. I had a teal blue easy bake oven I used constantly, and a cotton candy making machine that spun sugar into treats – Yum! 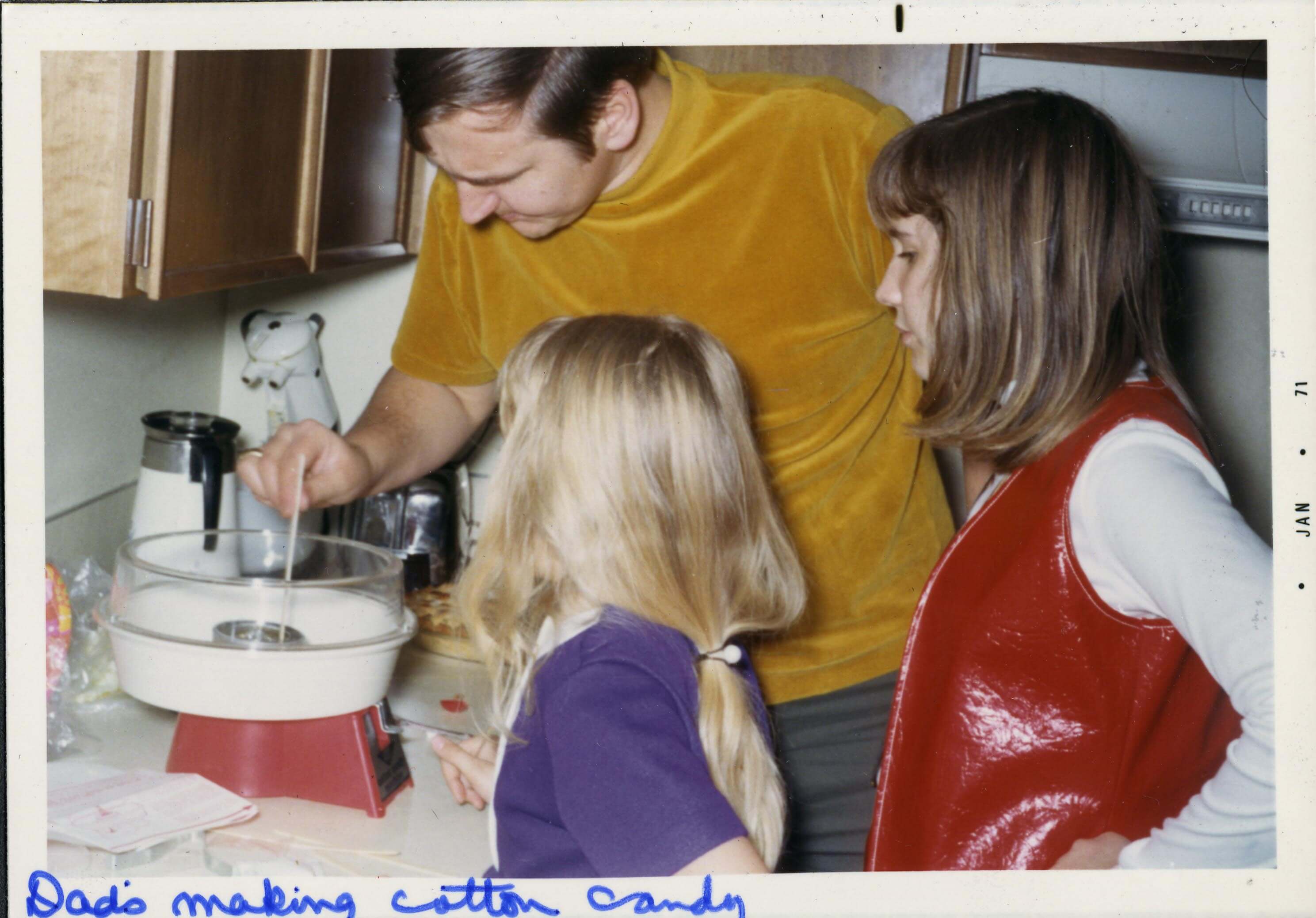 At the age of eight I learned to water-ski. It came surprisingly easy, so much so that my Dad got me a pair of short trick skis on which I learned to do a full 360 degree turn.

And like most kids I took piano lessons starting in the first grade. My mom bought an old upright piano for $75, and painted it bright red (you can see where I got my artistic flair from!)

Something else that slowed me down was not really learning music theory. Oh I had learned the basics, and became a laser-focused sight-reader of music. But my while my second teacher taught me scales, I don’t recall her ever saying why we were doing them. Needless to say, I didn’t practice them because I didn’t know why we were bothering with these notes that weren’t songs. Therefore, I never learned them or their significance to music.

One of my all time favorite songs was and still is One Less Bell to Answer by the Fifth Dimension. I first heard it on the TV series It Takes a Thief starring Robert Wagner which ran from 1968 to 1970. The song was featured in the third season episode called Sing a Song of Murder. 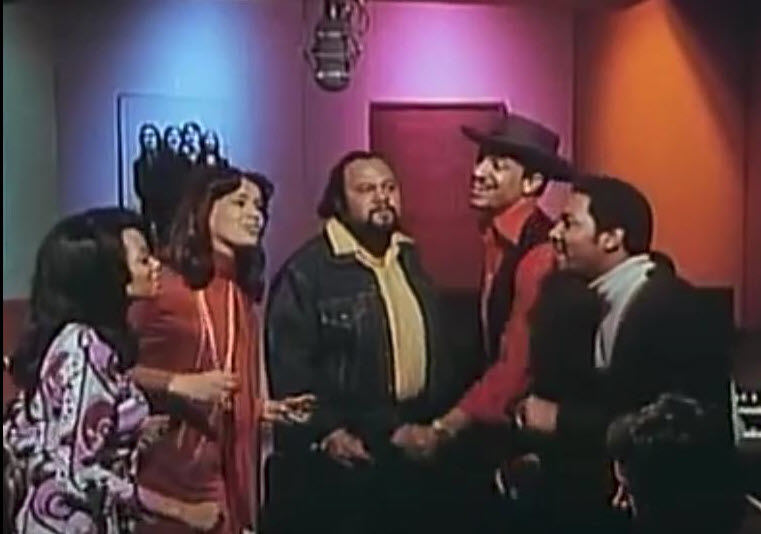 5th Dimension on Sing a Song of Murder

The 5th Dimension were the guest stars that week, and Marilyn McCoo sang that torch song like no one else could. I drove my mom crazy as I belted it out from the top of my lungs and begged her for 5th Dimension albums for my birthday. I still have my original 5th Dimension Live double album and the 5th Dimension Greatest Hits on Earth, both of which feature the song. 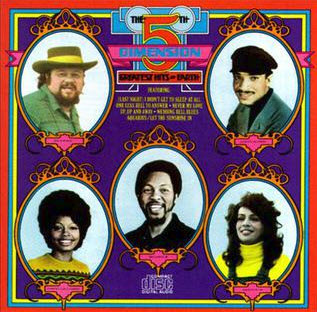 Harder than the Average Song

The other day I was falling down a rabbit hole on Instagram where I saw that Marilyn McCoo and her husband Bill David, Jr. had started an Instagram account (you can follow them here). I started following them, enjoying reading about how they are celebrating their 50th anniversary this year, and seeing old TV clips and new video of their performances.

I got to thinking about that To Catch a Thief episode and soon the rabbit hole led me to YouTube where I watched it. From there I found a tunnel to MusicNotes.com where I bought the sheet music for One Less Bell to Answer.

I sat down, excited to play it, and was stopped in my tracks. This Burt Bacharach and Hal David classic was as hard to play as any of Liszt’s classics!

And so I found myself a good video series on music theory basics. I’ve been devoting a half an hour each day to learning the Circle of Fifths, scales and chords. I also put my husband through listening to me do another half an hour a day of practice, with an emphasis on One Less Bell to Answer. My husband says I’m getting better, though I’m still frustrated that it’s not yet quite where I want it to be.

Along the way though, something really interesting has happened.

I have noticed something wonderful after each painful, slow study and practice session. When I go back to my regular music (my sheet music stack includes the likes of Supertramp, Fleetwood Mac, Bach, Beethoven, Billy Joel, one of my favorite composers, Mr. Rogers), that music is much easier, and I’m much better at playing it! In fact, it’s more of a joy to play than ever, and I usually end up playing another hour in the evening, giving up time previously wasted on television.

So what does this have to do with family history and genealogy? Well…

Mastering the Music of the Genealogical Brick Wall

One Less Bell to Answer was not only my favorite song, but one of the toughest to master. So let me ask you, what’s your toughest genealogy case right now?

We all have a brick wall or two that has plagued us. I get emails every day from listeners of the Genealogy Gems Podcast outlining the family history challenge that has them stumped. Sometimes I think their hope is that I might have a genealogical silver bullet, or that I might be aware of some low-hanging genealogical fruit that they’ve over looked. I always encourage listeners to write in because many times there is a quick source or strategy that I can offer that they just may have missed. Or I can refer them to one of our articles, videos or podcast episodes that can provide a more in-depth answer. There’s always value in sharing with others the research challenges we face, and soliciting ideas and input.

However, in many cases, the answer is not so simple. Many of the cases described go well beyond a quick search at one of the Genealogy Giants websites. (You can learn more about them here.) These are cases that don’t have an easy answer. There isn’t one source just waiting to be found.

Sing a Song of Genealogy

Genealogical brick wall cases are much like the most glorious torch songs. They will require more education, steady relentless work, and a willingness to end each research session (like a piano practice session) unsatisfied with the current results. But when we stay focused and persist, we can remain optimistic that the end result will be worth it.

This answer to tough genealogical questions isn’t a popular one. That’s due in part to the increased tech tools and vast online databases (which are all fantastic boons for the genealogist by the way), that appear to offer instant gratification. This auto-generated “genealogy” can actually dilute our research edge when we really need it. We can be lulled into believing there should always be a quick fix. We find ourselves not as willing to stop, create a research plan, set up a tracking spreadsheet, and execute a plan to find the answer.

Many a family tree (particularly online) is filled with errors created by an unwillingness to take the time to dig deep. For example, are we really sure we have the right ancestor when there are several men by that name in that county at that time? Did we really prove it?

Is creating and using a genealogy research plan new to you? That’s not usual.

These days, many people first come to climbing their family tree through a genealogy app. Several of the popular genealogy apps allow you to instantly start adding what you know already about your family to your family tree on the app. Then the app starts serving up record hints and matches – genealogical records it thinks may match the people you have added. It may also connect you to other users who share branches of your family tree.

While there’s a bit of instant gratification in all this, it doesn’t help us see the bigger picture, or develop our skills as a researcher. In a sense, we are following the app’s research plan (and I use that term very loosely here), rather than developing and conducting our own research plan.

When we finally take up the baton, and start leading our own research, we will gain more satisfaction and end up singing the right song. 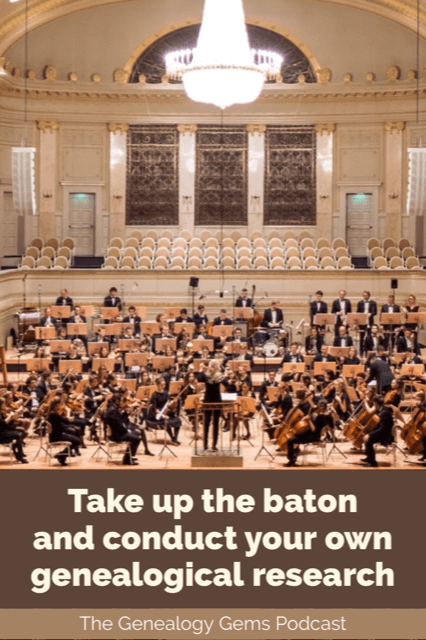 To learn more about genealogy research plans, read my article Which Way Do I Go Now? Organize a Genealogy Research Plan. Genealogy Gems Premium members can watch the Premium video Using Evernote to Create a Research Plan here. (Membership and log in required.)

If you’re facing an imposing genealogical brick wall, why not set aside all your other searches, and just work on this one? Slog along, fight your way through it! Do it for an hour every day. If your knowledge is lacking, go find the answers. Get up to speed on the areas you don’t know enough about.

It helps to accept that this genealogical answer that you seek, like a really wonderful song, is going to require more learning and practice than the average answer. But when it’s done, you’ll have the satisfaction of having conquered a really tough one, and the confidence that you got it right.

I can promise you this. When you take the time to craft and work a real and true genealogical research plan, you’ll be pleasantly surprised that when you go back to your other research, you will find it easier, and more enjoyable.

And yes, I’m still working on mastering my favorite song. Follow me on instagram and when I have it mastered, I’ll play it for you.

Please use the social buttons at the top of this post to share it with your genealogy friend.