How to Identify Old Cars in Photographs

Follow these tips to identify old cars in photographs from your family albums. You can often identify the make and model of the automobile; decipher and date the license plates, and even discover additional documents relating to the earliest drivers on your family tree. 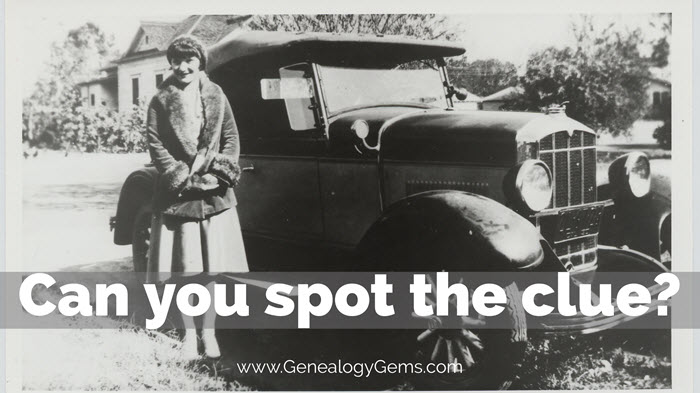 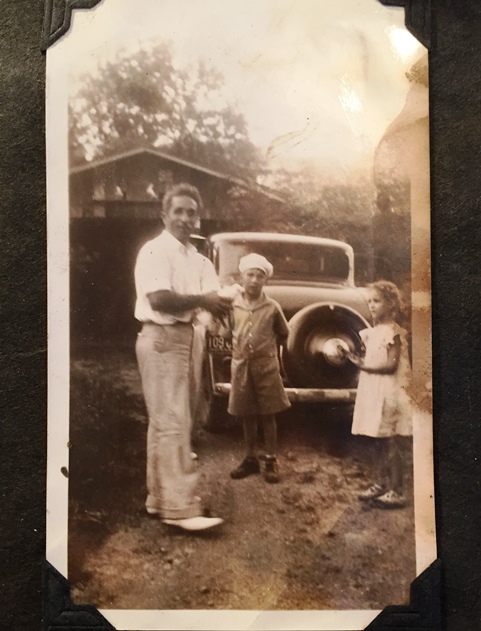 Many of us have mystery photos in our family archives. Jennifer sent me a creative question about identifying hers:

“Have you ever come across any information on searching old license plate tag numbers to find an identity of the registrant? I have old photos that, according to my aunt, are the family of my grandmother’s boyfriend, Max, before [she married] my grandfather. The photos are amazing. Very ‘Great Gatsby-esque.’ Amazing clothes and car, right?! One photo has a smiling man standing in front of an old car with a portion of the license plate showing. I do not know the identity of this man or children. I’m thinking start with searches for plates beginning with 109 in the years before my grandmother was married in the state of Indiana, where she and Max lived.”I didn’t know if I had a ‘lead’ in that or not. I may be pulling at strings. I’d love your advice.”

What a great idea! I haven’t tried Jennifer’s exact approach to researching license plates as a way of identifying owners. But I have a similar story about researching an old car in my own family photo. My story, below, may help Jennifer and anyone else wanting to identify old cars in photographs. Keep reading for tips on researching the make and model of a car; deciphering the license plate to help date the photo and even on finding early drivers’ records. Owning a car was (and still is) a source of pride and excitement for many families, so it’s really worth taking a closer look at their cars in old pictures.

An old car photo in my own family

Here’s a photograph I love of my grandmother Alfreda as a teenager, beaming as she poses beside the newly purchased family automobile. In her diary, she divulges her excitement for the surprise she came home to after church:

Oct. 21, 1929 Sunday. “Went to Sunday school and when I got back there was our new car waiting for me.  Willy’s Knight. I drove it all around, went and gave Evelyn a ride. Made Mama mad.”

This diary entry piques my interest. What year was this? Where did the car come from?  What’s a “Willy’s Knight?” And if Mama got mad, who gave Alfreda the keys? I suspect Alfreda may have been a bit of a Daddy’s girl, but alas, this photo may not be able to reveal that family dynamic. However, the photo does contain important clues that has helped me answer at least a few of these questions.

Before you start trying to identify an old vehicle in a family photo, it will help to know whether it’s categorized as a veteran, vintage, or classic car. What’s the difference? According to ItStillRuns.com:

With these categories in mind, visit websites that can help you identify old cars by providing descriptions and pictures of various makes and models. Two sites I suggest are Hubcap Café.com: Collector Car Resources and a Flickr group called Vintage Car Identification. (This second one is for the truly stumped because you can submit a photo that car enthusiasts from around the world could help you identify.)

I already knew from Grandma’s diary that the car in the above picture was a Willys Knight. But I wondered if I could nail down the make and model. I ran a few Google searches and found some fantastic websites.

Paul Young’s Willys Overland Knight Registry website had just what I was looking for. The site features dozens of photographs of all the different makes and models of Willys Knight automobiles in chronological order. So I scrolled down to the late 20’s and compared each photo to the photo of my great grandfather’s car. Bingo! The 1928 Willys Knight 70A Cabriolet Coupe America matched the car to a T. Everything from the convertible roof, the headlights, bumper, and side view mirrors all matched up.

From there I clicked on the Willys Knight History link, which led to not only a written history of Willys Knight but a chart of Willys Knight Specifications. A quick scroll down led me to the specs for Grandpas 1928 70A series car. I learned that great-grandpa’s car was introduced in August of 1927 for the starter price of $1,295. (Here’s a free online inflation calculator. Try plugging in 1927 and $1,295 to find out what the car would cost in today’s money.)

I also learned that the car was a 6-cylinder, as well as specs on the horsepower, the wheelbase, and even the range of serial numbers that the car would fall within. This website was jammed packed with everything you could ever want to know about the Willys Knight car. (If you’re interested in chatting with others about Willys Knight cars, you could also visit this site’s Facebook page.)

My book The Genealogist’s Google Toolbox—which is where you’ll find all the tips you need for doing these Google searches–has an entire chapter on finding videos on YouTube. A quick YouTube search on “Willys Knight 1928” brought up this short but cool video uploaded in 2014: “Take a ride in a 1928 Willys Knight made in, owned in and driven in Toledo, Ohio.” 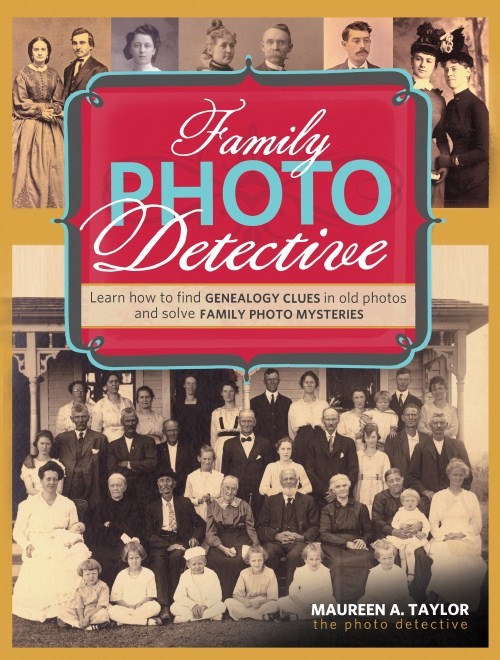 Family Photo Detective by Maureen Taylor is your ultimate guide to identifying old objects in pictures to help you learn more about your family history.

In Family Tree Magazine a few years ago, I read an article called “Motor Trends,” written by my friend Maureen Taylor. She said that said that by 1918 all states had adopted license and registration laws. It recommended that you look for a license plate in old photos. License plates often have a year on them and possibly even the owner’s initials.

Unfortunately, the license plate in my photo is so dark I couldn’t read it at all. My guess is that this is probably the situation in many cases when someone has a photo of a car. So here’s what I did to solve this problem: 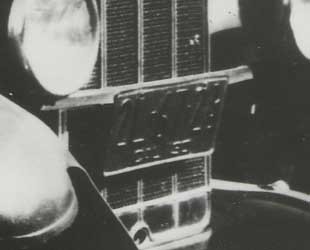 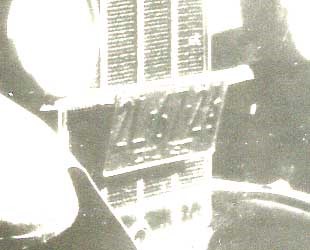 There was something printed under the license number, but I still couldn’t quite read it. It looked like CAL 29, which would make sense because they lived in California and the year they bought it was 1929. But I couldn’t be certain. So I ran a Google search for “old California license plates.”

For example, I learned that California has required license plates since 1905. In that year, there were over 17,000 registered vehicles in the state. I found a replica 1929 license plate that read “CAL 29” across the bottom of it. Just what I’d thought mine said! And thanks to WorldLicensePlates.com, I was even able to determine that the license plate in my black and white photo had a black background and orange lettering.

What about the license plate in Jennifer’s photo? Only a partial plate is visible, but it’s enough to compare to images of Indiana license plates at WorldLicensePlates.com:

Jennifer can take several important clues from this comparison:

From these clues, I’d say that the 1932 plate is certainly the closest match.

California state statutes of 1901 authorized cities and counties to license bicycles, tricycles, automobile carriages, carts, and similar wheeled vehicles. Owners paid a $2 fee and were issued a circular tag. Later, tags were either octagonal or had scalloped edges. 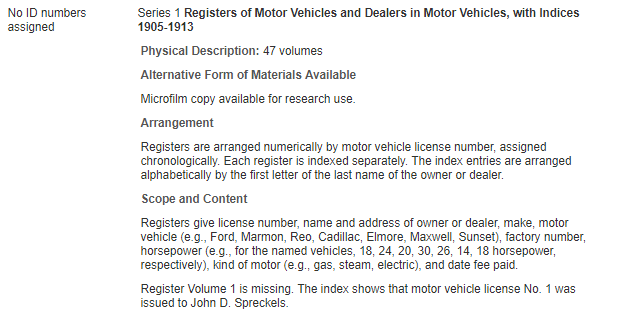 So this got me curious. Could I access records associated with my great-grandfather’s license plate and automobile registration? Typically states move records of this age to their state archives. I started by Googling California State Archives. The Online Archives of California has a searchable database that includes the state archive holdings. The online catalog has motor vehicle records (61 volumes!) for the first several years they were issued (1905-1913).

A description in the online finding aid stated: “Motor Vehicle Records, 1913 transferred those functions from the Secretary of State’s office to the Department of Engineering.” There are actually two clues here: 1) the phrase “motor vehicle records” is what I likely want to use when searching for records, and 2) the office that likely kept the records for my time period (1929) was the Department of Engineering. A followup search using these search terms got 13 results. Unfortunately, none of these records included 1929, and an email inquiry to the State Archives wasn’t fruitful, either. But this showed me that driver registration records may exist. 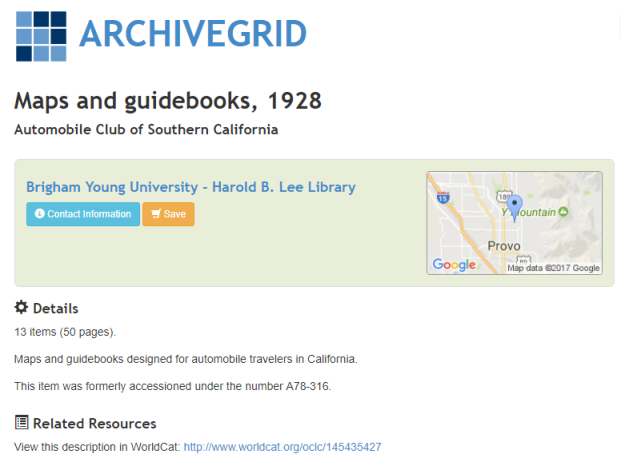 So may other driving-related records. I did several searches in ArchiveGrid, an enormous online catalog for archival collections. No California motor vehicle registrations popped up. But I did find a collection of 1928 maps and guidebooks for the Automobile Club of Southern California, held at the Brigham Young University library in Provo, Utah. There was also a collection of thousands of images collected by the Automobile Club of Southern California (mostly in the 1920s and 1930s) at the Huntington Library in San Marino, CA.

If I really wanted to learn more about the early-1900s “sport” of automobile driving in California, I could spend some time with record collections such as those.

Does this discovery change the course of my family history? No. But it was a heck of a lot of fun to learn what I did about the oldest automobile I’m aware of my family owning. It’s exciting to discover these little gems: they connect me to the past in such an interesting way. Even better, it gave me something to share with my husband, Bill, who loves old cars! 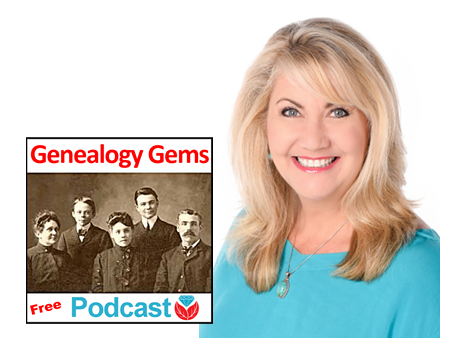 Hear inspiring stories and learn hands-on, try-it-now strategies for discovering your family history in my free Genealogy Gems Podcast. There are more than 200 episodes to get your genealogy motor running, with a new episode published each month. You’ll find the latest news, try-it-now online search strategies and inspiring stories to keep you on the road to genealogy research success.