The Christmas List that Continues to Speak to My Heart

Some family Christmas traditions carry over easily from generation to generation, and some don’t. Here’s one tradition I tried passing on to my children, and how it has played out. It reminds me that traditions themselves can be unexpected–which ones have staying power and how each generation reshapes heritage in its own way. 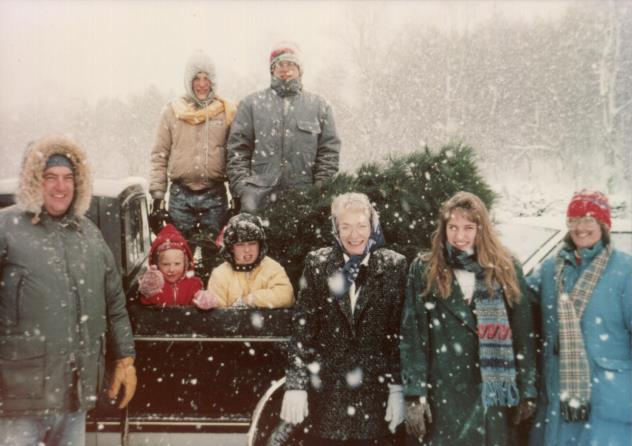 That’s me in the green coat, between my grandma and my mom. My dad stands on the left, with my four younger brothers in the back of the truck.

I grew up with several family Christmas traditions: making candy cane cookies, tromping through the snow to cut a live tree and, on Christmas Eve, re-enacting the Nativity with my brothers as my dad read from the Bible. Over the years, my husband and I have tried several of these traditions. Some traditions have translated well into our lives, and some haven’t. (Though I loved it as a child, the year I walked a mile into the woods in heavy borrowed boots while pregnant was my last for cutting a live tree.)

One holiday tradition that has rooted itself in my children’s lives surprised me. It’s not exciting or tasty. Yet they have adopted it fully–and they’ve even started documenting it.

A family Christmas tradition that lives on

My mom always loved putting up the Christmas tree. She planned a made-for-memories event each year, hoping to have joyful carols, hot chocolate and pictures worth putting in the Christmas letter. What she got from me and my five brothers was usually less idyllic. We sang plenty of carols, loudly, but they were more likely to be “Grandma Got Run Over by a Reindeer” than “Silent Night.” Pictures always had someone sticking out a tongue or elbowing a brother. And my mom often had to wrangle us into putting up the tree and stringing up the lights first, which was guaranteed to make some of us grumpy. 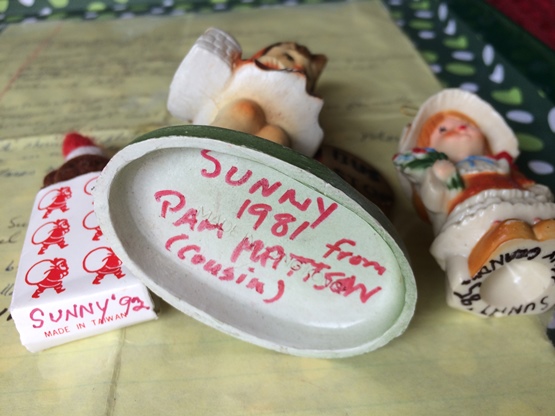 But every year, my mom made sure we each had a new ornament to hang on the tree. Sometimes she made or bought it. Sometimes another relative sent us ornaments. I don’t know how she always had these ornaments amidst the chaos of Christmas preparations for six children. But she did it. She even labeled them with our names and the year.

When I left home, she gave me a box of my ornaments–along with a list, year by year, of which ornaments we received and extra notes about some of them: 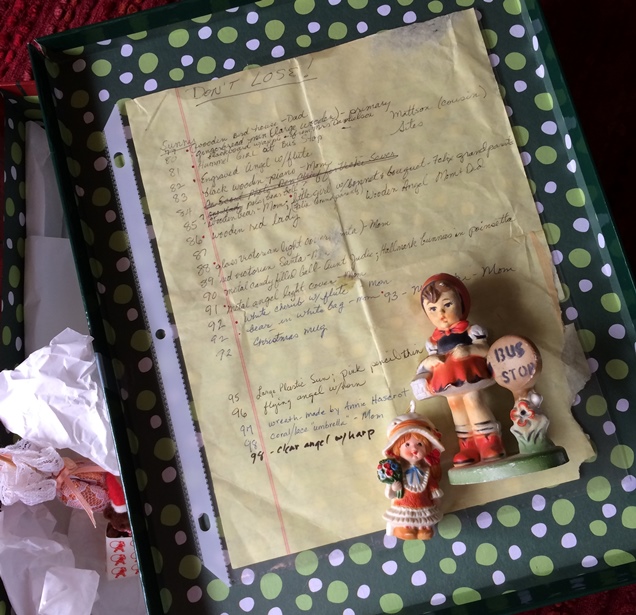 About six years ago when decorating our tree with my husband and children, I pulled out my box of childhood decorations with my mother’s list in it. For some reason, that year, her list especially spoke to my heart. I knew I wanted to do this for my own children. So I divided up the ornaments I’d given Jeremy, Alex, and Seneca over the years. I added a couple of ornaments for years that didn’t have them. I started lists. They weren’t fancy lists: just a piece of notebook paper, like my mom’s on yellow legal paper. I figured if I waited until I found holiday stationery, it would never happen. 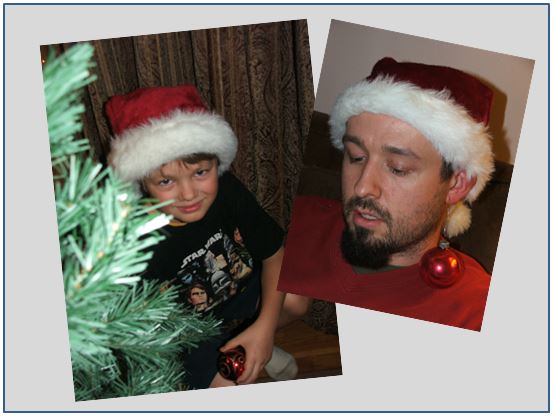 The following year, I presented my children with cute boxes for their ornaments. I slid my lists into sheet protectors and taped them inside each box. They were actually delighted to hang their own ornaments! No cajoling was necessary.

In fact, we had so much holiday cheer that my husband decorated his ear with an ornament. My oldest son Jeremy began snapping pictures. Seneca launched herself at Jeremy, Alex pounced, and they all dissolved into a pile of giggles on the floor, their Santa hats somehow still intact.

Since then, the kids have gone looking for their own boxes of ornaments each year. Some years I am more prepared than others: this year, they will get their 2017 ornaments on Christmas Eve.

I love that my children have come to own this tradition. Alex has actually begun documenting his new ornaments himself. You can see how he picked up where I left off: 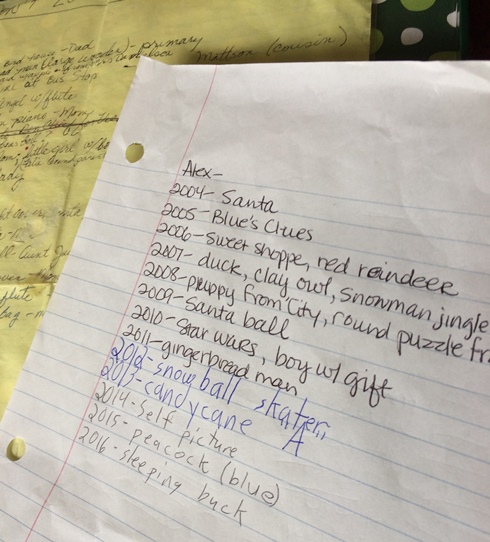 Now that I’m a mom, I can’t help but look at my mom’s list a little differently. It’s a chronicle of a mother’s love, steady and shown in little things and relatively unappreciated. Across the top of her list, she wrote, “DON’T LOSE!” She was probably thinking of her carefree young adult children who might not appreciate this box of ragtag ornaments and what it represented to her. Today, I think her message is more than a warning not to lose the ornaments she so carefully tracked and packed away each year. It’s about never losing hold of her love for us–the heritage that matters most.

In our family, at least, the adoption of any tradition is a little messy and uncertain, especially now that I have teenagers. I never know whether’s it’s going to “take,” who’s going to roll their eyes or rebel, whether they will feel and respond to the message behind the time we spend together and the rituals we create. My solution is to try a lot of traditions. To not be afraid to change things up to suit my own little band of a family–even to create new traditions on the fly. To be flexible with my expectations–they may very well wrestle instead of sing “Silent Night” as they hang their ornaments, and that’s fine. As long as they are laughing and creating memories of the ways their family shared its love.

May you enjoy creating or reliving your own holiday traditions this year! Feel free to share any with us on the Genealogy Gems Podcast Facebook Page.

Merry Christmas to your family from mine, and from all of us here at Lisa Louise Cooke’s Genealogy Gems.