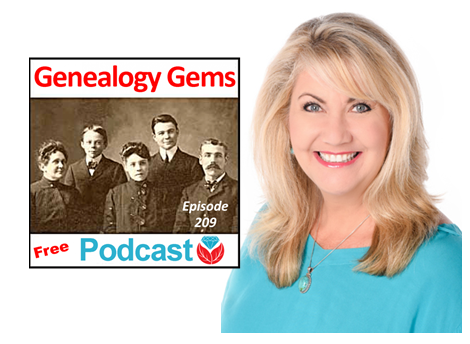 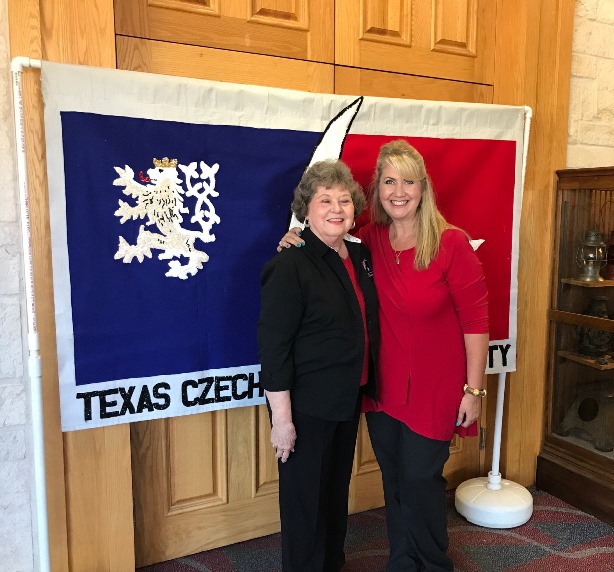 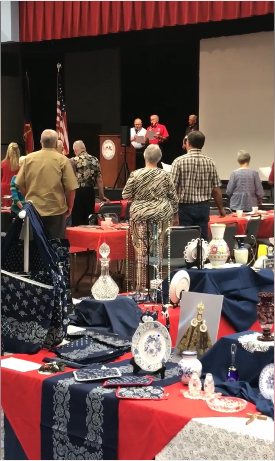 Thanks for a great seminar, Texas Czech Genealogical Society! (shown right: the beautiful items you see in the foreground are Czech crystal and other traditional items) 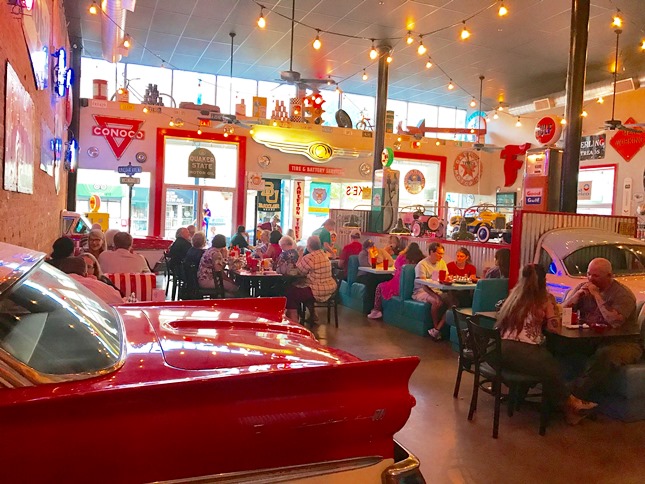 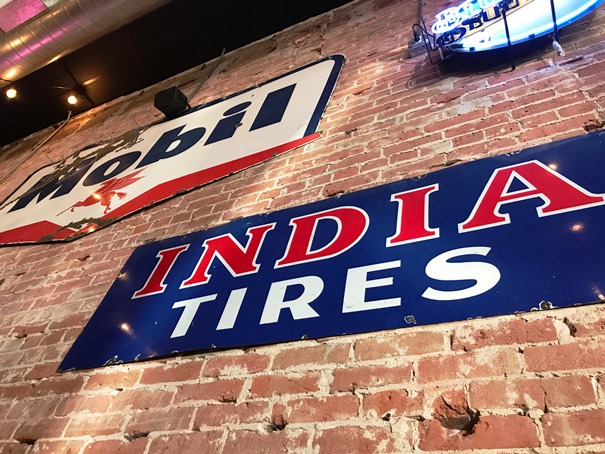 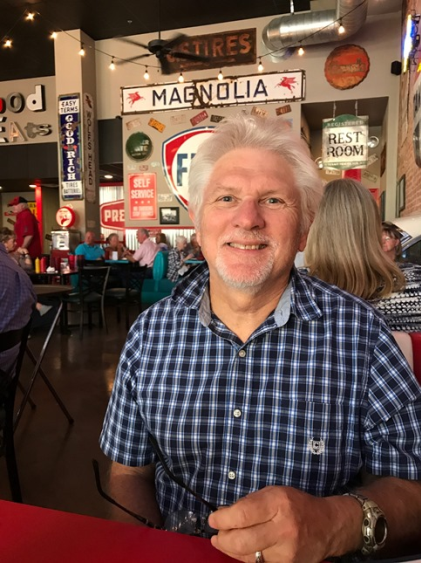 Magnolia Market at the Silos 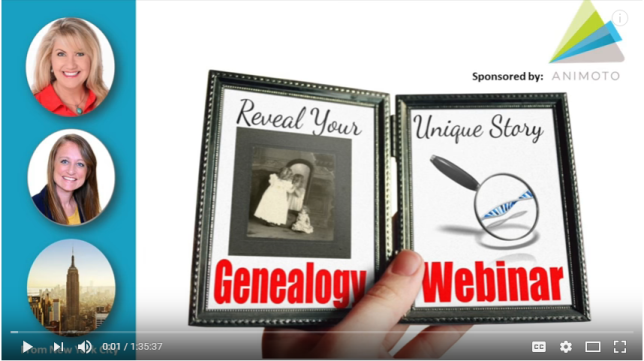 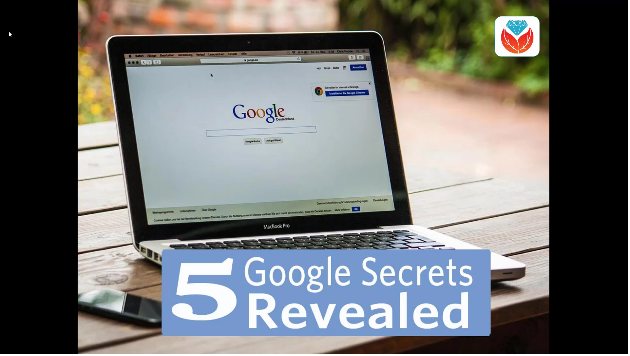 Develop your search superpowers to uncover information about your family history on the web with Google at lightning speed! Explore tools like Image search, facial recognition, finding specific types of files, how to find the answers you need, and more. Click here to watch a class preview; click here to become a Genealogy Gems Premium member.

David Ouimette, CG, manages Content Strategy at FamilySearch. He has conducted research and analyzed archival materials in dozens of countries in North and South America, Europe, Africa, and Asia. David lectures regularly and has written for genealogists, including Finding Your Irish Ancestors: A Beginner’s Guide. 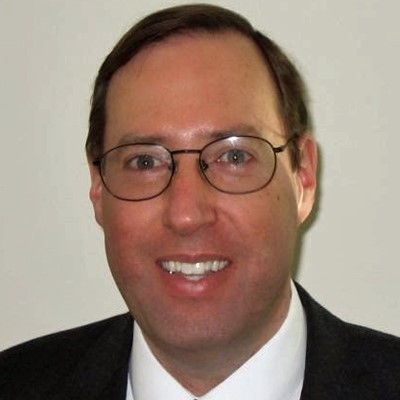 Genealogy Gems Contributing Editor Sunny Morton is the author of “Genealogy Giants: Comparing the 4 Major Websites.” (discontinued) Use this jammed-packed cheat sheet to quickly and easily compare the most important features of the four biggest international genealogy records membership websites: Ancestry.com, FamilySearch.org, Findmypast.com and MyHeritage.com. Consult it every time your research budget, needs or goals change!

Start creating fabulous, irresistible videos about your family history with Animoto.com. You don’t need special video-editing skills: just drag and drop your photos and videos, pick a layout and music, add a little text and voila! You’ve got an awesome video! Try this out for yourself at Animoto.com. Use coupon code YEAR15 for 15% off annual plans through 12/31/17. 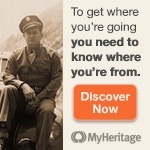 If a clue found in your ancestor’s US draft registration records listed military service you will want next to search for his Compiled Military Service Record (CMSR).

The Compiled Military Service Records (often abbreviated at CMSR or CSR) record the name, unit, and period of service of the veteran along with information related to military service from the Revolutionary War to the end of the hostilities of the Philippine Insurrection after the turn of the 20th century.

The information varies greatly from each of the war periods that recorded this information. Besides the identifying features listed above, they typically contain muster in/out information, rank in/out details and further highlight the soldier career by recording promotions, prisoner of war memorandums, casualties, and a number of personnel papers which may include enlistment papers and other related documents. Several of the war periods also provide physical descriptions of the soldiers including; name, age, nativity, occupation, height, hair, eyes, and complexion information. This set of records represents the volunteer Army and doesn’t include regular Army enlistments. Except for limited records of the Revolutionary War and the War of 1812 for the Navy, the other branches of the military (including Navy, Marines, and Revenue Cutter Service) all have their equivalent set of records.

Your ancestor may have multiple entries in the CMSR. This could occur if a soldier served in more than one unit, or in the case of John LeMaster, who enlisted in two different armies. The Civil War divided our nation, testing the loyalty of all persons who lived during this time. Lemaster chose the Confederacy (as least initially) when in 1861 in Charlestown, VA he enlisted with the 2nd VA Infantry fighting alongside of his Brigade commander Thomas J. Jackson who later would be known as “Stonewall Jackson.” (Photos: John H. Lemaster and his family in Martinsburg, WV. Photos courtesy of Michael Strauss.) 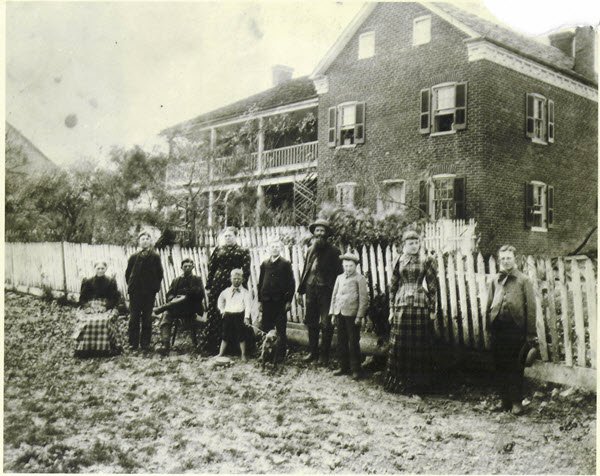 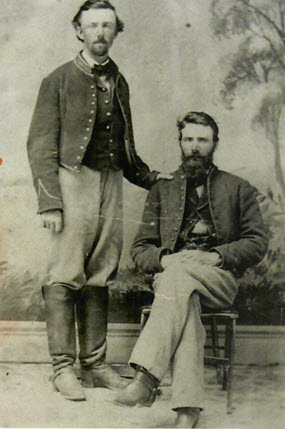 After the Confederate loss at the battle of Gettysburg he deserted and lived in Martinsburg in what was now West Virginia where on his Draft Registration he was listed as a deserter from the Rebel Army.  In 1864 he enlisted in the United States Army with the 3rd WV Cavalry, serving out the duration of the war until 1865. After the war he was granted a federal pension, with no mention of his former service in the Confederacy.

Shown on following pages: his military service records for both the Confederate and Union armies. 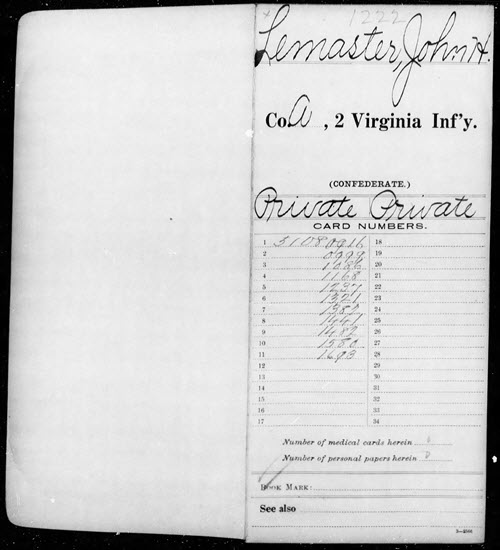 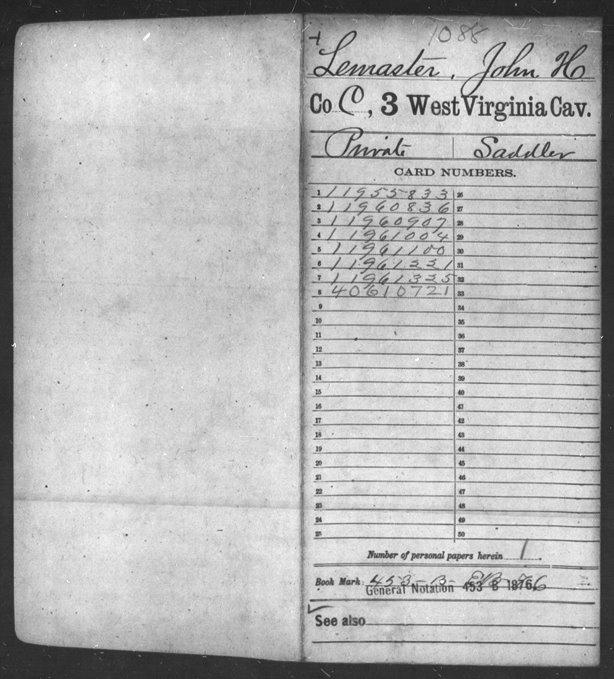 Access various CMSR indexes and images online at the following:

During the Revolutionary War additional Compiled Service Records were completed for the Navy, which was broken down to include Naval Personnel, Quartermaster General, and Commissary General Departments.

Old Wars (1784-1811). After the Revolutionary War, the newly formed United States government sought to maintain a regular Army. However, volunteer soldiers who served from 1784-1811 were recorded. (One of the reasons for volunteers to be called up would have included the Whiskey Rebellion of 1793.)  Their Compiled Military Service Record full images are available online here.

Full copies of CMSR are online for FL.

Revolutionary War. Full copies of the Compiled Military Service Records for CT, DE, GA, MD, MA, NH, NJ, NY, NC, PA, RI, SC, VT, VA, and Continental Troops.  This database often doesn’t list the local militia as most of the men listed were part of the continental line. Researchers can access this group of records and search by keyword or location. Search here

Old Wars. This database is an index and full images of the Compiled Military Service Records of those men who served after the Revolutionary War and before the War of 1812, covering the years of 1784-1811.

War of 1812. Abstracted lists of names, state, and military units from the Compiled Service Records (no images). Search here

Indian Wars: Database with images for Florida: includes the Florida Wars, Second Creek War, and the Third Seminole War from 1835-1858

Mexican War. Full copies of the CMSR are online for MS, PA, TN, TX, and the Mormon Battalion. Search here

Family Search has fewer Compiled Military Service Records available online that include images. One of the major collections includes the Revolutionary War CMSR’s that when searched here, the images provide a direct link to Fold3.

Most of the other major war periods are microfilmed and available through the Family History Library in Salt Lake City, Utah. With online access through both Fold3 and Ancestry provided on the computers in the library, accessing the film is less desirable.

Suzanne’s comment: “Did you realize that this site from the Georgia Tech Research Institute is actually a wonderful search engine for Chronicling America.loc.gov. website? I have used the LOC site often, but found it cumbersome sometimes. This is a real time saver. Thanks for the Genealogy Gem.”

Lisa’s tip: In the timeline you can specify a date, like 1860 (date and month too!), then press play and it will play back and reveal the locations on mentions of your search query coming forward in time. It would be really interesting to take a word or phrase and see when it first occurred. This is a very feature-rich website!

A short YouTube video documentary on Leavittown: it’s a great example of the do-it-yourself video narratives you can make to tell your own family’s stories!

KEEP UP WITH GENEALOGY GEMS