Featured this week are new records for Canada, including the 1851 Canada Census, and BMD for Saskatchewan and Manitoba. Other records include new Irish collections, updated New Zealand birth, marriage, and death collections, new marriage record collections for England, and the launch of the New York State Death Index. 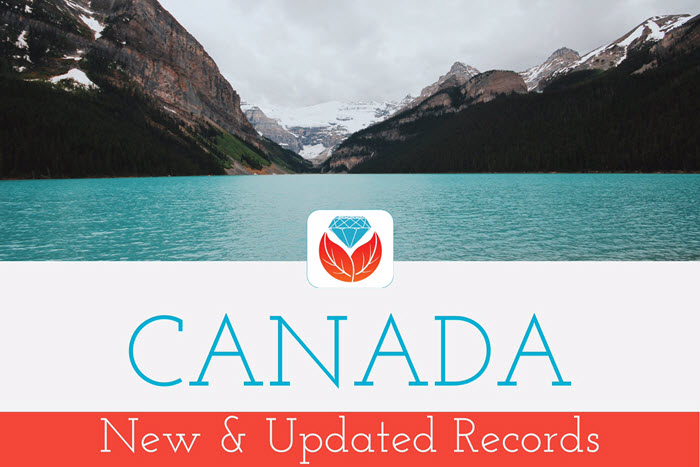 Also at Ancestry this week are new records for Manitoba, Canada. You can search Baptisms, Marriages, and Burials (1834-1959), and keep in mind that some of the records in this collection pre-date Manitoba’s creation as a province, and, as a result, are from locations that do not exist in present-day Manitoba. Some records may also appear in French. You can also explore Manitoba Census Indexes (1832-1856 & 1870).

The 1851 Canada Census is available now at Findmypast. It contains over 1.3 million records and images for Canada West (Ontario) and Canada East (Quebec), New Brunswick, and Nova Scotia. This collection is also available at MyHeritage, as well as at the Library and Archives Canada (though their search tools may not be quite as robust).

For fabulous quick tips on Canadian research, take a listen to Lisa’s interview with Claire Banton of the Library and Archives Canada (LAC). Available free on the Genealogy Gems Podcast episode #199.

County Cork. A new database of Irish soldiers is now available online: Deserters, acts of heroism, and IRA murders unearthed. According to the site: “The details of some 2,187 people – soldiers and their families – recorded mainly in the registers of Ballincollig Garrison Chapel have been recovered using the registers of baptisms, marriages and burials between 1810 and 1922 now in the safe custody of the RCB Library, and further research using a variety of additional resources have further unlocked their hidden stories.”

Snippet from a detailed spreadsheet containing information on the 2,187 soldiers and their families recorded in the registers of Ballincollig Garrison Chapel.

Newstalk. The Central Bank of Ireland opens its archives up to the public, including an online catalog. According to a recent article: “The bank says the archives can now be used for public research purposes for the first time. They include a range of materials created and acquired by the bank – such as objects, documents, and ledgers dating from 1786 to 1986.” All materials are open to the public in a dedicated research room, and an online catalog is available to determine what materials may be of interest.

It’s wedding bells for Britain! Findmypast has a new collection of Oxfordshire Marriage Bonds 1634-1849 with over 46,000 records. You can also browse the new British Marriage Licenses 1446-1837 collection, where 15 English counties are represented including London, Lancashire, Suffolk, Exeter, Lincoln, Yorkshire, and more. Lastly, explore the thousands of Fleet marriages in Findmypast’s new collection of England Clandestine Marriages 1667-1754 of over 42,000 records.

New York. Ancestry.com has just launched a collection of New York State death indexes 1880 to 1956. Ancestry says that “the collection includes more than 5 million names of people who died in New York State.” This death index is available online elsewhere for free, but Ancestry subscribers will appreciate the convenience of searching it on the site.

Florida. The Greater North Miami Historical Society had a collection of historical images. Its historical collection dates back to the 1930s and includes over 4,000 negatives, photographs, and other items. *Only a fraction of the material has been put online and the project continues.