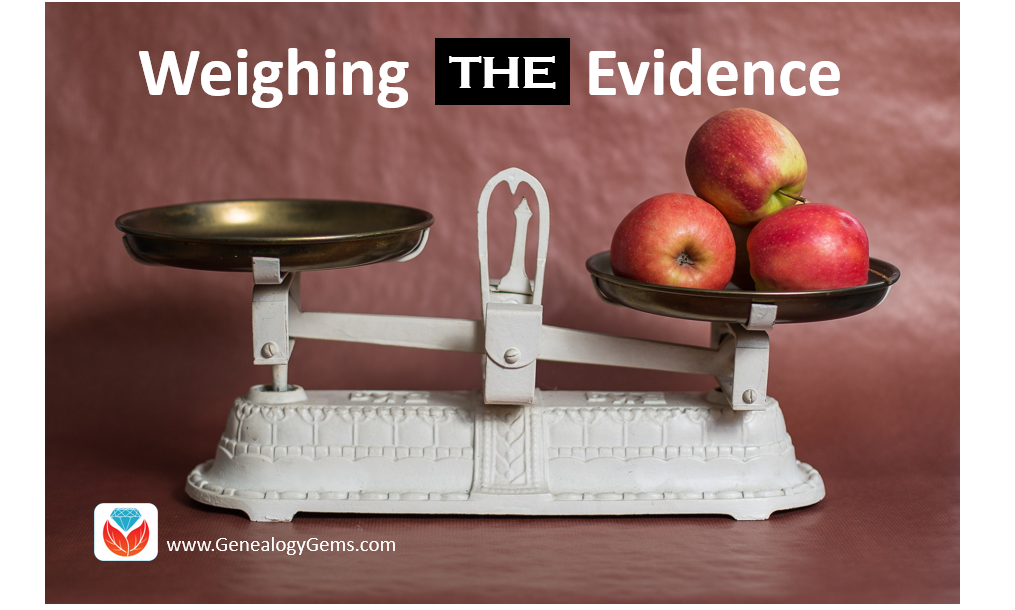 I joke about our recent “cookie incident” here at home. No one wanted to fess up to who ate all the cookies, but it didn’t take long to evaluate the evidence and come up with the culprit. The trail of crumbs, the height at which the cookies were stored, and who was home at the time, were just a few of the ways in which I came to a sound conclusion.

As genealogists, we have to weigh disagreeing or conflicting evidence all the time. Maybe you have two records giving two different birth dates for a great great grandmother. Whatever the conflict, here are some tips to resolving three of the most common conflicts and why they exist.

I have found numerous birth date conflicts in my personal family history. Some reasons may include:

These are just a few of the many reasons why you may find a conflicting birth date. Resolving a birth date conflict, or any genealogical data conflict, may be possible by remembering the following:

The record recorded nearest the time of the event, by those who have first-hand knowledge, is typically considered the most reliable source.

Here’s an example. Nancy Blevins Witt has two possible birth dates. Using her death record, we can only calculate a birth date based on her age-at-death given in years, months, and days. That calculated birth date would be 19 Nov 1890. However, the date of birth recorded on the 1900 U.S. Federal Census is October 1890, and we were never able to find a birth record. Which birth month is likely correct, October or November?

To make this determination, we will need to consider the following:

2. Who was the likely informant of the 1900 census? Was that a person with first-hand knowledge of Nancy’s date of birth? We can’t be absolutely sure, but we could suppose that Nancy’s mother was the one who gave the census taker that information. Since the mother was obviously present at the time of Nancy’s birth, we would consider her a reliable witness to the event of Nancy’s birth.

3. Do any of these informants have a reason to lie? Is there something, like money, to be gained by providing a certain birth date? The answer is no.

We can say that the likely accurate date of birth for Nancy is October 1890. Of course, we want to make note of both the records and the discrepancies in our personal database and remember that it is always possible a new piece of evidence will pop up that makes us re-evaluate this assumption.

Marriage date conflicts can be found for a variety of reasons as well. Some of these reasons may include:

Again, these are just a few of the reasons for a marriage date conflict.

In this next example, John and Eliza are said to have married about 1857. Unfortunately, no actual marriage record was ever found.

There are however, two sources for a marriage date. Both of these sources are found in the War of 1812 Pension Application Files which was viewed online at Fold3.com. A War of 1812 Pension Application is a great place to find marriage information. The widow would have needed to prove that she was indeed the widow of the veteran before being able to receive her pension. Widows sometimes supplied actual marriage certificates, or like Eliza, they may have included affidavits instead.

This pension file for Eliza contained two documents, the first of which was an affidavit given by Eliza herself stating that she and “Jackson Cole” were married in March 1857 in Harlan, Kentucky by Stephen Daniel. Sadly, throughout the application, Eliza changes dates, ages, and names making us wary of whether her information is accurate. She had also been denied pension once before, and this was her second attempt. Because this is a pension and dealt with money allocation, and because she had been denied before, there is a reason for her to lie or fudge dates and details of the facts to meet certain criteria. We will want to take this into consideration. The second document is an affidavit from Stephen Daniel who states he married the couple in 1854.

Now, we want to further evaluate the two sources.

Who do you think would most likely remember the date of marriage? If you said Eliza, I think you are right. Further, the fact that Eliza had her first child about 1857 is also a strong indication that a marriage had taken place fairly recently. Based on all these reasons, we could assume the most likely date of marriage was March 1857.

Reasons for conflicting death dates may include:

An example of a conflicting death date might be that an obituary says the person died on 20 February 1899, but the death record and tombstone give the date as 19 Feb 1899. We all know that newspapers are notorious for misprints. Further, a death record indicating the death date of 20 February 1899 is a record typically made on or near the date of death. This is typically when information is most fresh in the minds of the informants. A newspaper article, however, could have been printed days or even weeks later.

Whatever the conflict, you can typically use these practices to come to a sound conclusion. Oh! And by the way, have you ever heard of using the “GPS?” We aren’t talking about the little device that tells you how to get to that really cool new restaurant. We are talking about the Genealogical Proof Standard. Resolving conflicting evidence is just one of the components of the GPS. To learn more about this high standard, listen to podcast episode #23: Using the Genealogical Proof Standard.