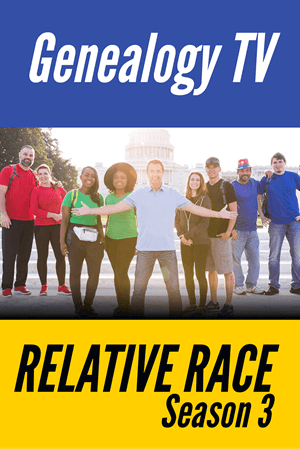 Tomorrow evening, you’ve got a new genealogy TV option! The new reality series from BYUtv, Relative Race, “features four married couples as they travel across the US in search of long lost relatives, armed with only paper maps, a rental car, a $25 per diem and a flip phone.”

The show sounds like one part Amazing Race, one part Who Do You Think You Are? With autosomal DNA test matches provided by AncestryDNA, four “couples embark on a journey that starts in San Francisco, ends in New York City and leads them to unknown relatives along the way. Cameras follow all four teams as they drive across the country–more than 4500 miles–in just ten days, stopping each day to complete a challenge and find (and stay with) their newly discovered relatives in a different city.”

“At the end of each day, the team that finishes last receives a strike. After three strikes, teams are eliminated. The remaining teams travel to NYC for the grand finale where there is a $25k grand prize for the winning couple.” Here’s a preview–and something to curl up in front of tomorrow evening.

The show airs on Sunday, February 28 at 8pm ET/6pm MT/5pm PT on BYUtv, the television station of Brigham Young University. Watch Relative Race for free or on your preferred cable network:

WDYTYA Archive: What They Didn’t Tell Us in Ginnifer’s Episode