“Help! Why Is My Ancestor Listed TWICE in the Census?”

It’s a common problem to not find your family history in the census AT ALL. But what happens when you find them listed TWICE?

Donna recently wrote in with this head-scratching question: “Lisa, I love your podcast, and have been to several of your presentations, and lots of your webinars. You make everything seem like it is all within my reach. So when I came across this issue, I thought you’d be the perfect one to ask advice from.

“Like most of us…citing my sources has not always been the best.  So I decided to go back and redo my files, making sure that I have all the sources cited.  In looking at my husband’s family, I have found something weird.  Usually, I find that family is not included in the census, but have you ever found it where they are listed twice?”

She transcribed both 1910 census listings for Fred Dierks’ family with me, both in Whitman County, Washington (one in Harper Precinct and one in Colfax City). Then she wrote, “Not all the kids are in both households, but the younger ones are in both.  And both censuses are enumerated by different people. What do you make of this? What was the protocol for counting the same families in different locations? My family is from the South and I usually find them missing from censuses, not having them show up twice! How would you cite this?  Would you choose one and forget the other?  Or cite them both?  Or…?”

Really? An ancestor listed TWICE in the census?

Yes, this is very possible, and I have a case in my own family. Just this weekend a gentleman came up to me at a seminar and told me about a case in his family, and that his grandmother had birth certificates in not one, or two, but THREE different locations!

In the case of the census, there are a variety of reasons why you might find an ancestor listed twice in the census: owning more than one piece of property, living in one location and working as a domestic in another, or moving during the census-taking period, for example.

Without seeing the documents I can’t speak to Donna’s case specifically, but here are some suggestions for anyone who finds an ancestor listed twice in the census:

1. Look at the date each enumeration was taken.

2. For later censuses, look at who provided the information. In the 1940 census the informant is indicated by a plus sign with a circle around it. If there are two entries, each with a different informant, that might explain why the family didn’t realize they were counted twice. Unfortunately, in earlier census records it typically isn’t indicated who provided the information. (Click here for the census enumeration instructions for 1910, the year in question here.) 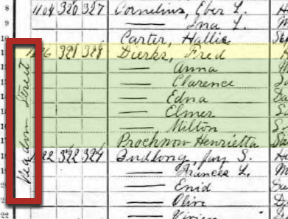 The street name (Meadow) shows up on one of this family’s listings in the census. Image from the 1910 census at Ancestry.com.

3. Compare the neighbors’ names and the street name in each listing: are they the same (evidence that both were taken at the same physical location) or different (evidence of different physical locations–or different routes taken in the same neighborhood that only overlapped by that household). This census image shows that the family lived on Meadow Street; the other listing doesn’t say (page backward to find the street name). But the next-door neighbors in both listings are different.

4. Look for an address for the family from that time period from another source, like a WWII draft registration card or city directory. Which census listing address matches up with it?

5. Look at local maps from the time period and census enumeration district maps (FamilySearch has many in this browsable collection). Did your ancestor live on the boundary of a census district and inadvertently get counted twice by different enumerators?

Google may be able to help map this last problem. I searched “1910 map Colfax WA” and found the 1910 plat map shown below on the left. Meadow Street is marked, but Almota Street (the next cross-street listed further down the census page) isn’t marked. A modern Google Maps image shows the intersection clearly, and I can compare them using the bend in the creek and the intersection of Lake St and Thorn St. Comparing this neighborhood to census enumeration district maps may help determine whether in fact these were overlapping census enumeration districts.

For Donna and others of you out there finding multiple census entries for your ancestors: you’re not alone! Here’s an interesting conversation on Ancestry about other genealogists who have experienced duplicate census entries. And here’s a fun page about famous people enumerated twice in the census.

By the way, be sure to cite both sources. Thanks for the question, Donna! You’re a Gem!

More Resources for Mapping Your Family History at Genealogy Gems

The Genealogist’s Google Toolbox (all-new 2nd edition newly revised in 2015!) teaches skills like the ones used above for searching for modern and historical maps in Google, Google Maps and Google Earth.

5 Ways to Enhance Your Genealogy Research with Old Maps. A Genealogy Gems Premium website membership required–but you can watch a clip from it for free below:

Thank you for sharing this post with your friends and genealogical society members! Just copy and paste the URL into an email or share the post on your favorite social media site using the social media icons on this page.