When Lisa blogged recently about Google Earth’s 10th birthday, it reminded me of something on my family history “to do” list. A few years ago I found a postcard of what I thought was an ancestor’s neighborhood. Could Google Earth confirm it? 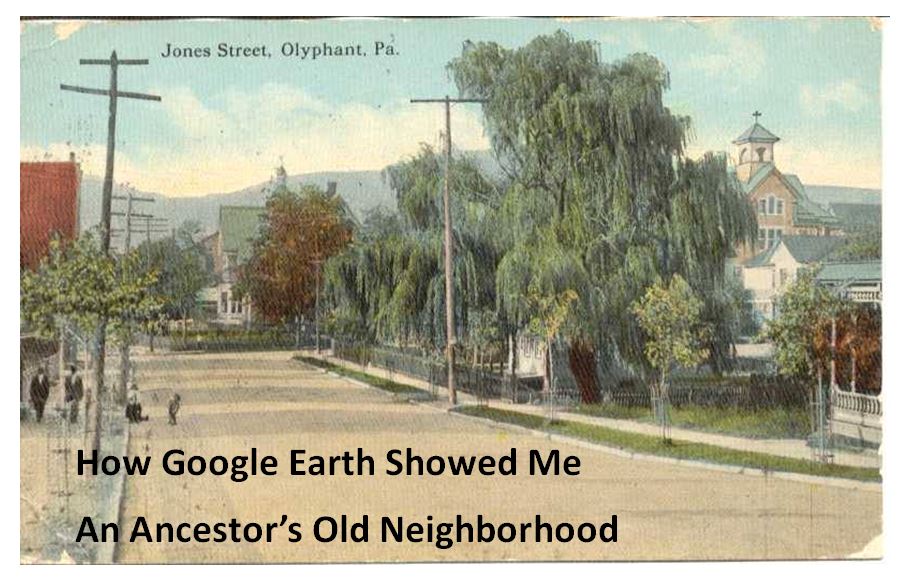 Lisa uses Google Earth’s powerful 3D renderings of the world’s streets to identify where old pictures were taken. I knew from deeds, a plat map, and addresses on censuses and draft registrations that the O’Hotnicky lived on a certain block of Jones St. (now named Grant St.), around the corner from and behind Holy Ghost church.

This postcard of “Jones Street, Olyphant” looks like its viewpoint is from the end of the block behind the church. This would mean the tall tree shown here was shading–and blocking our view of–the O’Hotnicky home. 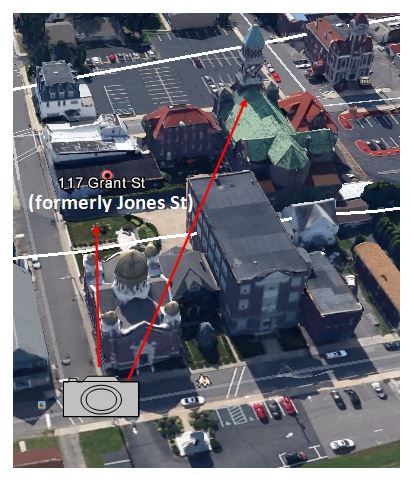 I opened Google Earth and flew to “117 Grant St, Olyphant, PA.” The initial view, hovering from above, was promising. The camera icon shows where I thought the photo was taken. The left arrow points to the former line of trees, in front of the ancestral address. The right arrow points to the church tower behind.

Unfortunately, when I enter Street View at that exact spot, the new church on the corner and a tall apartment building block the view that would have been seen a century ago. There is no Street View available on Grant Street itself so I couldn’t move up the street toward the church. So I moved into Street View along the side street (parallel to the bottom of the photo).

In the opening between two buildings, Google Earth gave me a glimpse of the church tower. I compared the postcard view with Google Earth’s photo. The church towers look so similar: a simple cross on top, pointed copper roof, arched tower and the building roof line. Even more striking to me is the white frame house. Was this the same white house shown in the postcard view? 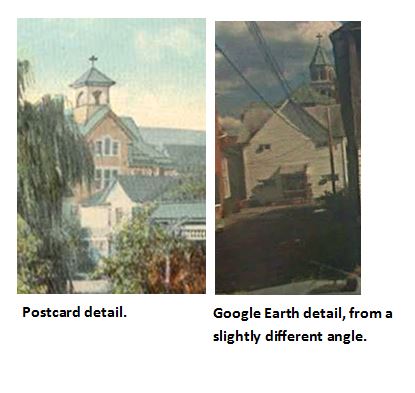 These two visuals taken together–the church tower profile and the position of the white house–seem consistent with my theory of where the photo was taken. Which means that yes, indeed, this 1910 postcard shows the trees in front of an ancestor’s home as they appeared 105 years ago.

Google Earth can fly you to an ancestor’s neighborhood–and whatever clues its current landscape gives you into the landscape of the past. Click here to watch Lisa’s free video about using Google Earth for genealogy!