Do You Have Pretty Little Pony Pics in Your Family History? 6/4/10

Blacks and bays, dapples and greys
Running in the night
When you wake
You shall have
All the pretty little ponies

Are there any pretty little ponies in your family tree photos?
That’s what my friend genealogy blogger Ian Hadden asked in a recent post called Riding Ponies.  He starts us off my sharing a pic of baby Ian riding high on a pony and then goes further back in his tree to a photo of his father doing the same.
Roaming photographers snapped pony pictures in towns across the land.  Ian’s photos reminded me of photos in my own collection and I quickly retrieved some favorites of my grandfather, Al…

Genealogy Gems Premium Members and those who’ve picked up a copy of the Google Earth for Genealogy DVD will recognize this street as 288 Connecticut, in San Francisco.  The location was unknown to my family for many decades, but through the intersection of census records, voters registrations, and Google Earth the mystery was solved and the location identified

The year was 1908, and San Francisco was still recovering from the great earthquake of ’06.  That’s Al’s father Charles Allen standing on the sidewalk (the man on the right) keeping an eye on his little buckaroo.  (A bit of trivia: Charles is the son of the man in the Genealogy Gems Podcast logo.)  The difference between Al’s pony and Ian’s is that this pony was stuffed!  However, Al did eventually make his way on to the real thing…

Do you have a pretty little pony picture in your collection? 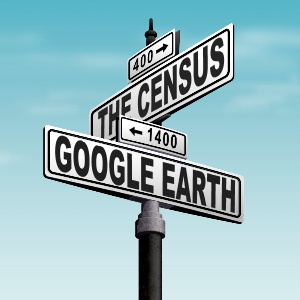